Hamburg Left Party candidate Sarah Rambatz received a torrent of criticism after she made a post on Facebook asking for recommendations for “anti-German” films specifying that she wanted to see ones in which Germans were being killed.

The 24-year-old, who is the national spokesman for the Left Party’s youth wing, made the post this week which led to a backlash after another user captured a screenshot of the post. That user then sent the screenshot to the Left Party who commented: “Sarah Rambatz will resign from her place on the Hamburg list due to this incident. The Left stands for dignified politics,” MOPO reports.

National spokesman for the Left Hendrik Thalheim also commented on the incident: “This post was a rare act of stupidity and was tasteless.” 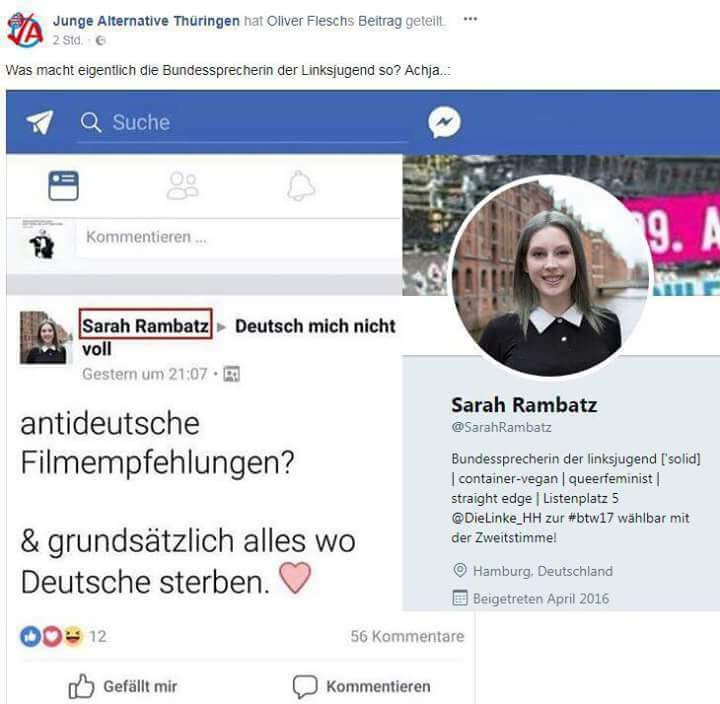 Rambatz herself has claimed that she has experienced harassment on the internet for her remarks. She told MOPO:, “I have been in contact with the police and the state protection for days. My family and I receive death threats. I am defamed as an enemy of the state and threatened with rape.”

She described the Facebook post as “a silly, thoughtless action” and added that she should have been more careful with her choice of words.

The incident is not the first time a member of the Left Party has stirred controversy regarding what many see as an anti-German, pro-mass migration stance. In 2015, Left Party member Gregor Gysi said: “Every year more native Germans die than are born. That is very fortunate. It’s because the Nazis are not very good at having offspring.”

The Left Party was formed in 2007 after the merger of two other political parties but traces its roots back to the ruling party of Communist East Germany. Whilst the Left Party has yet to win power nationally, they are part of several regional coalition governments like that of the German capital Berlin.

The Berlin left-wing coalition has stifled attempts by the federal government to deport failed asylum seekers along with other left-wing regional governments in recent months.

The coalition has also claimed that left-wing extremism is not a problem in the city despite multiple incidents involving left-extremist groups like Antifa fighting police, looting shops, and burning cars.