BRUSSELS (AP) — Catalonia’s ousted regional president said Tuesday he traveled to Brussels to seek “freedom and safety” after Spain blocked his bid for Catalan independence and sought to bring charges against him that could put him in prison for decades.

A day after he arrived in Brussels, Carles Puigdemont told a packed news conference he would return home “immediately” if a fair judicial process were guaranteed in Spain. He dismissed speculation he would seek political asylum in the Belgian capital.

“Here we have better guarantees for our rights and we can meet our obligations from here,” he said at the Brussels Press Club, which is right next to the European Union’s headquarters.

Puigdemont said he and his team will stay in Brussels and “continue our work despite the limits imposed on us.”

The Spanish government has cracked down on Puigdemont’s attempt to take Catalonia, a wealthy region of some 7.5 million people, out of Spain. The government says Puigdemont flouted the Constitution by holding an Oct. 1 independence referendum. The Catalan parliament approved a motion declaring independence last week, but the Spanish Constitution says Spain is “indivisible.” 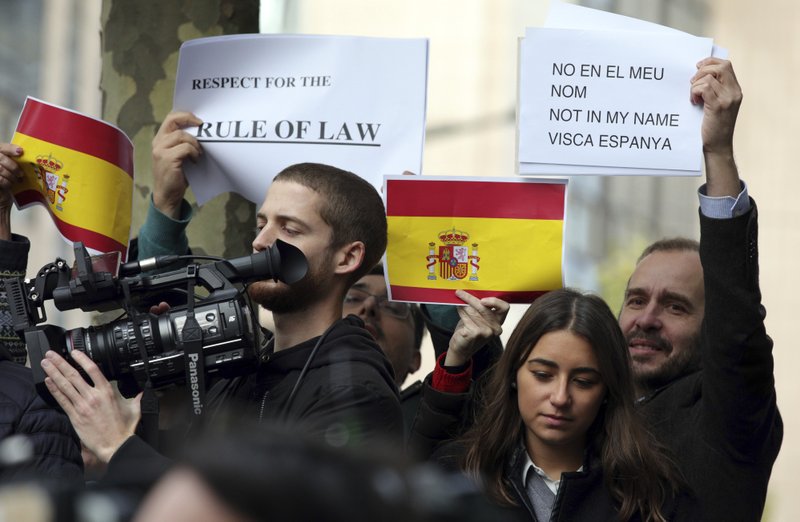 Spain’s chief prosecutor is seeking charges of rebellion, sedition and embezzlement against Puigdemont and his no. 2 Oriol Junqueras before Spain’s National Court.

Separately, he is seeking similar charges before the higher Supreme Court for six ex-members of the governing body of the now-dissolved Catalan parliament because they enjoy a degree of immunity and could only be tried by this court. Earlier Tuesday, the Supreme Court agreed to investigate the case against the six.

The National Court has yet to decide in the case against Puigdemont.

Puigdemont was flanked at a news conference by five of his ousted regional chiefs. He said that he would accept the challenge of early regional elections the Spanish government called for Dec. 21 “with all our strength” and that Catalan nationalists would take part in the vote. That promise erased fears that secessionists might boycott the ballot in the hope of denying it legitimacy.

Puigdemont walked into the building past a few protesters with Spanish national flags and pro-unity signs, including ones that that said “Rule of Law” and “Not in my Name. Long live Spain.”

In another setback for the separatists, the Constitutional Court in Madrid said Tuesday it was suspending the Catalan parliament’s vote to declare independence from Spain while it studies its legality. The court has consistently ruled against any move toward Catalan secession.

One of the main separatist civil society groups of Catalonia, the National Catalan Assembly, said Tuesday it accepted the regional election, despite the fact it was called under the Spanish government’s intervention.

The group, whose leader is in jail on provisional sedition charges, is not a political party but it has been the driving civic force behind the independence movement in recent years.

It said grassroots organizations need to prepare a “joint strategy” ahead of the elections with the goal of “obtaining an uncontested victory that will ratify the Republic.”

Meanwhile, some of the official websites of the Catalan government tied to the previous administration were down Tuesday, in a further sign of the takeover by central authorities.