German police have used a water cannon to disperse hundreds of leftist protesters attempting to stop the Alternative for Germany (AfD) party convention, with projectiles thrown at police, injuring one.

Clashes between police and demonstrators on Saturday morning briefly delayed the opening of the gathering of the right wing, populist party in Hannover.

The water cannon was deployed despite freezing temperatures, prompting claims of a police overreaction.

According to FAZ, one officer was injured by a bottle thrown from the crowd; another was hit by a rock but was unharmed.

Hundreds of protesters take to the streets of Hanover to protest against the far-right Alternative for Germany (AfD) party pic.twitter.com/kylZLULizp

Video reports online from a similar protest on the streets of Hamburg Friday night, ahead of the conference Saturday, showed people with Antifa (anti-fascist) flags and some throwing red flares off of buildings.

Footage of the protest on social media showed masked demonstrators with red banners attempting to run around the police line. AfD members only made it in the event under heavy guard.

Delegates of #Germany’s right wing populist #AfD party first have to get past thdemonstrators before joining their party conference in #Hanover. After entering parliament for first time will once again debate how #FarRight AfD wants to be. pic.twitter.com/yLZMeVEKVi

The AfD party, which won 12 per cent of the vote and seats in parliament for the first time this year, has a leadership race this weekend to fill a void created when its best-known figure abruptly quit.

Alternative for Germany co-chair Frauke Petry, who won a parliamentary seat in the Bundestag, left the party in September to form the ‘conservative-liberal’ Blue Party.

Petry’s departure left her rival, Joerg Meuthen, alone as chairman. Meuthen is vying for re-election Saturday at the party’s meeting in Hannover. It’s not clear if AfD will decide to have one or two chairs. 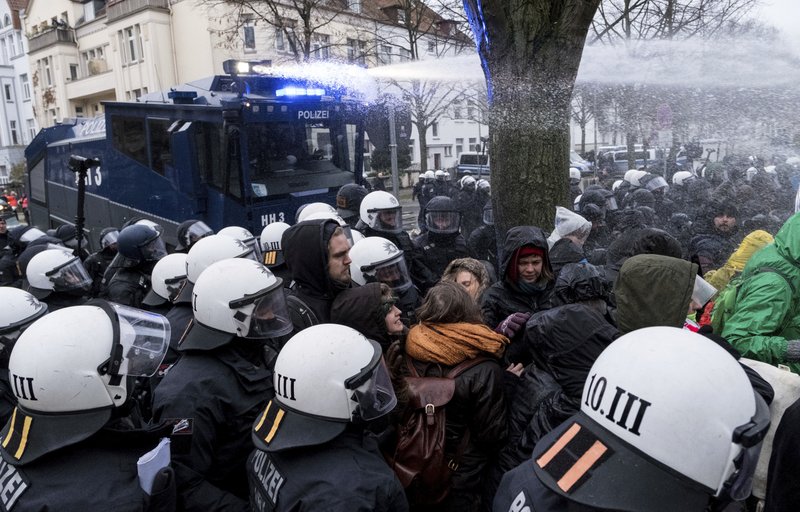 Police use a water cannon to clear a street that is blocked by demonstrators near the congress center where the party convention of the Alternative for Germany, AfD, is held in Hannover, Germany, Saturday, Dec. 2, 2017. (Peter Steffen/dpa via AP)

Their former coalition partner, the Social Democrats (SDP), also had their worst post-war election performance and announced they would quit the “grand coalition” and go into opposition.

(AP contributed to this report)