SID, Serbia (AP) — Several hundred migrants were camping along Serbia’s borders on Monday, sleeping rough in make-shift shelters from the cold as they look for a chance to cross into neighboring European Union countries.

Amid biting wind and freezing temperatures, the migrants huddled around small fires in an abandoned factory near Croatia’s border, as aid groups distributed food and warm drinks.

“These people continue to stay outside in very inhumane and unsafe conditions…. There is no clear access to water or sanitation facilities,” said Andrea Contenta, a humanitarian affairs adviser in Serbia for Doctors Without Borders.

Contenta added that while officials have closed off the so-called Balkan route — leading from Turkey to Greece or Bulgaria, and on to Macedonia and Serbia — migrants still use it to cross illegally and face dangers.

“We cannot continue to say that the Balkan route is closed,” he insisted. “We have to acknowledge that people are still (moving) along the Balkans, and we need to find the way to avoid,” putting them at risk. 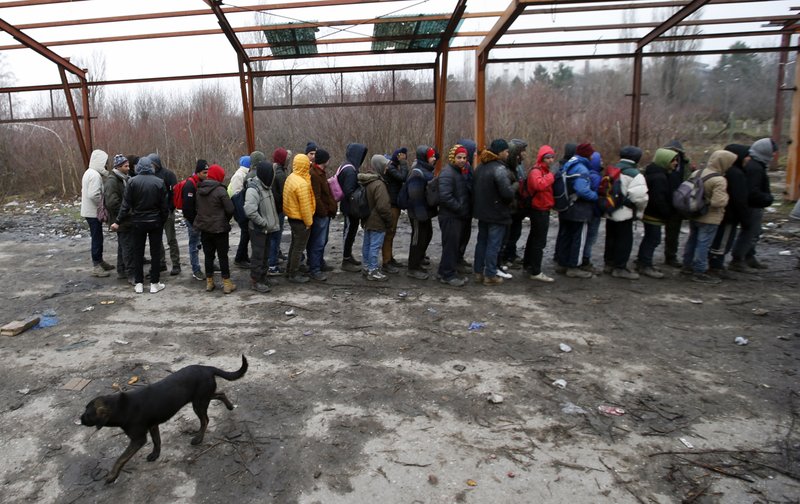 Though numbers of migrants in the Balkans have been reduced, Serbian officials said about 300 to 400 people have been staying out in the open, along with some 4,000 who are in asylum centers hoping to move on to wealthier European countries.

Thousands of people have been stranded since the March 2016 closure of the Balkan route.

Many migrants have since tried repeatedly to cross the borders with Croatia or Hungary, but have been pushed back to Serbia by police in those countries or have been stopped by a barbed-wire fence at Hungary’s border.

Forced to cross the borders illegally in most cases, migrants have turned to smugglers to guide them across.

Wrapped in woolen blankets, caps and shawls, some of the migrants camping on Monday held their feet above the fire to keep warm. Others tried to wash mud off their shoes as aid workers brought water to the make-shift shelter.

Ahmed Alloui, 20, from Algeria, said “there is bad life” back home and he wants to find a peaceful country where he can have a future.

“We are looking for better life,” he said.