PARIS (AP) — Six families of French jihadis captured during Islamic State’s retreat filed a complaint Wednesday demanding that the government bring them home, a week after a video of two notorious European extremists renewed the debate over how hundreds of foreign Islamic State fighters should be handled.

The complaint, filed by families of French women and children held by Kurdish militias, condemned what it called “deliberate inertia” by French authorities, saying it had left mothers and children — including infants — vulnerable to the risks of living in a war zone.

Yet in an interview in Monday’s Liberation newspaper, France’s military chief Florence Parly said she sees no reason to bring French jihadis home for trial. She says only 20 returned to France last year, while Belgium’s top security official has said only five of the country’s foreign fighters returned in 2017.

“The pseudo-Caliphate no longer controls territory, but this terrorist movement will without a doubt pursue its goals clandestinely,” Parly said. “For those French who are detained in the Levant, I remind you that these people took the initiative to join a terrorist organization that was engaged in combat in that zone, and that committed and continues to seek to commit attacks in France.”

Last week, prompted by Kurdish interviewers, French detainees Emilie Konig and Thomas Barnouin appeared on separate videos with nearly identical messages, insisting they are being treated well by the militia holding them.

The videos appeared intended to counter the allegations that Kurdish militia, known as the People’s Defense Units, or YPG, were mistreating Islamic State recruits — including women — captured when the extremist group retreated. They also lay the groundwork for trials of Europeans by an entity that has no internationally recognized government, much less legal system. 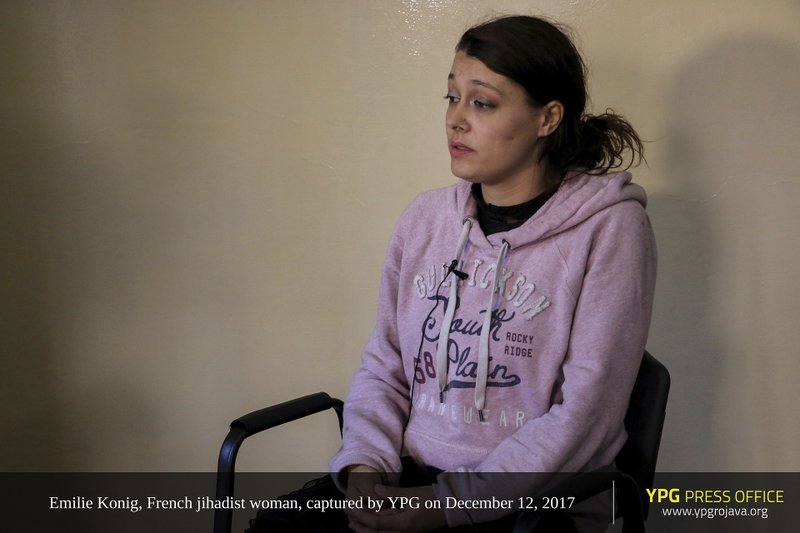 This photo released on Wednesday, Jan. 10, 2018 by the YPG press office of the Kurdish People’s Protection Units shows French national Emilie Konig in a video. (YPG press office via AP)

“The investigation is a normal process. It is hard to experience it this way. But it is just an ordinary investigation process consisting of questions and answers. Nothing else,” Konig said in halting Arabic, wearing a pale pink hoodie with her hair and face unveiled.

A veteran of France’s jihadi movement, Konig was famous for provocative public appearances in a fully-body niqab, which she referred to as a “second skin” just before leaving for Syria in 2012 to join the Islamic State group. She also was filmed in two propaganda videos the following year. She called on French Muslims to attack their homeland and is listed as a key recruiter for IS by the U.N. and the U.S. government.

According to the YPG, she was arrested on Dec. 12, 2017. Since then, she says in a French-language portion of the video, she has been treated well and has everything she needs.

Konig’s lawyer in France declined repeated requests for comment. She left two children behind in France and has two children with her in Syria, according to an interview with her mother in the newspaper Ouest-France.

The YPG said Barnouin was arrested while trying to escape into Turkey with five other French Islamic State recruits, echoing the Kurdish contention that Turkey remains a key conduit for extremists in transit. Speaking in English with repeated prompting by an interviewer, Barnouin also said he was being treated properly and, looking down, said he regretted joining the group.

Like Konig, the 36-year-old Frenchman was a convert whose ties to extremism date back years. He has been linked to both Mohammed Merah — the slain extremist who attacked French paratroopers and a Jewish school in 2012 — and to Fabien Clain, who was behind the Islamic State claim of responsibility for the deadly November 2015 attacks in Paris. Clain remains missing.

“We thought that if we surrender to YPG we could be tortured and even be killed,” Barnouin says in English. He said he would have surrendered, rather than be captured, “if we knew that YPG would treat us like this.”

The fate of foreign fighters in Syria and Iraq is unclear. In Syria, they are being held by a militia with no official international recognition, while in Iraq they face the death penalty.

The United States has relied on the YPG — the backbone of a Syrian force that drove the Islamic State group from much of northern and eastern Syria with the help of U.S.-led airstrikes. The U.S. says the militia will lead a 30,000-strong border security force in Syria. That prompted threats from Turkey to launch a new military offensive against the group, which Turkey considers to be terrorists because of their affiliation with outlawed Kurdish rebels fighting Turkey.

Parly’s comments aside, France has kept silent about the issue.

Mutlu Civiroglu, a Washington-based analyst of Kurdish affairs, said the French may have received some kind of assurances that their captive citizens will be treated justly. He said the videos seem to be a YPG effort to demonstrate that.

“They just want to show that these people are protected, their rights are protected,” he said. “If France believes that people can be tried in Rojava, in Kurdish-controlled Syria, they might have some kind of information that the courts are somehow capable of handling such a burden, such a responsibility.”

Parly said about 300 French jihadis died in the war zone, and between 500 and 600 remained there. The French government has good reason to keep the survivors at a distance, she said.

“Those who remain are combatants determined to fight to the end,” she said.