PEGIDA founder Lutz Bachmann has been prevented from entering Britain to deliver a speech at Speakers’ Corner, partly on the grounds that he “knows” identitarian activist Martin Sellner.

Bachmann had planned on delivering a speech written by the Generation Identity leader, who was recently detained along with YouTube political pundit Brittany Pettibone and then ejected from the country, partly on the grounds that GI is “viewed in the UK as a right wing organization” and partly on the grounds that Pettibone intended to “interview Tommy Robinson — a far right leader whose materials and speeches incite racial hatred”, according to seemingly official documents.

Bachmann also shared a picture of a document which he claims is from the officials who stopped him, which asserts that PEGIDA is “involved in the promotion and incitement of racial hatred and division of communities” and notes that “[by] your own admission during interview you have known [Sellner] well for some years” as grounds for denying his Free Movement rights. 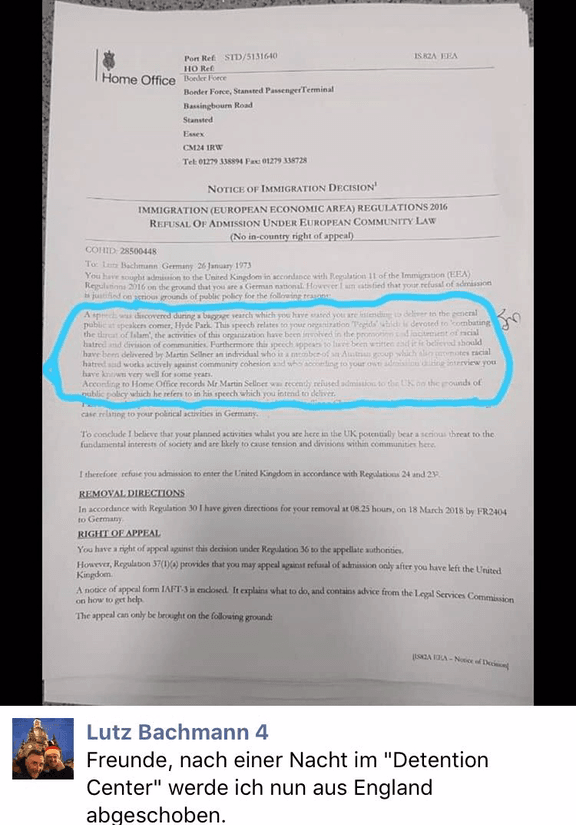 “A speech was discovered during a baggage search which you have stated you are intending to deliver to the general public at speakers corner, Hyde Park,” the poorly written document states.

“This speech relates to your organization “Pediga” which is devoted to “combating the threat of Islam”, the activities of this organization have been involved in the promotion and incitement of racial hatred and division of communities. Furthermore this speech appears to have been written and it is believed should have been delivered by Martin Sellner an individual who is a member of an Austrian group which also promotes racial hatred and works against community cohesion and who according to your own admission during interview you have known very well for some years.

“According to Home Office records Mr Martin Sellner was recently refused admission to the UK on the grounds of public policy which he refers to in his speech which you intend to deliver.”

KASSAM: The Week In Which Britain Locked Up Journalists for Being Right Wing https://t.co/sT6vn4zHpW

Officials have also recently detained and deported Canadian activist and independent journalist Lauren Southern, who is currently working on a documentary which highlights the apparent persecution of the white minority in South Africa.

Southern was detained under Schedule 7 of the Terrorism Act — despite what is claimed to be a recording of a conversation between Kent Police and Southern’s father showing an official laughingly admit that they “don’t suspect her of being a terrorist or anything like that.”

Critics have suggested the British authorities have been much more zealous in protecting the borders from right-leaning activists and journalists than they have been against foreign criminals, Islamic hate preachers, and returning jihadist fighters.