People can be “charged” with an “offence” if their actions are within the law but their “reasons for doing it” are perceived as illegal hate by others, London police have said, before withdrawing the claim.

Social media users began drawing attention to the Metropolitan force’s new, and highly unusual, definition of a ‘hate crime’ on the 16th of this month. It remained like that until the 18th, according to Google cache, before the police edited it again on Monday.

The definition did not match that given by the College of Policing or Crown Prosecution Service, and critics online claimed it could be read as a threat against “thought crimes”. 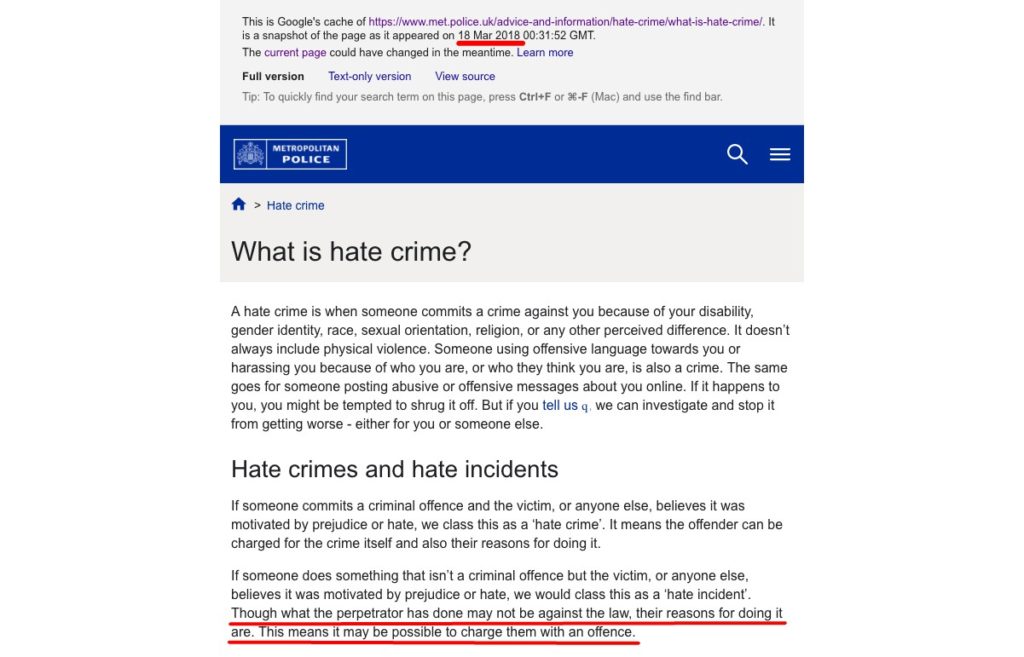 Breitbart London asked the Metropolitan Police for comment on their change of heart over hate crime, but no reply had been received at the time of publication.

“London’s Metropolitan Police inform you that you can be arrested for doing something that isn’t illegal, if someone else thinks you had bad thoughts while doing it,” joked U.S. commentator Jeff Jacoby.

“In 21st century Britain you could be charged with a hate crime, if ANYONE THINKS your actions could have been motivated by hate,” added another Twitter user.

“The Met seems to imply that a person can face two charges, one for the assault, and another for ‘their reasons for doing it.’ That is not true,” added criminal barrister Matthew Scott in an extensive blog post.

Mr. Scott accused the Met of writing “gobbledegook” and argued that “a badly written website misleads the public and damages the reputation of the Metropolitan Police”.

The earlier section of the Met’s hate crime definition might also seem alarming, insisting that people only need to “believe” a crime is motivated by hate for it to be recorded as such; however, this is a common definition used by police tracing back to recommendations of the 1999 MacPherson inquiry.

The Crown Prosecution Service confirmed last year that a “hate incident” only needs to be “perceived” with “no evidence needed”, and many UK forces include “dislike” and “unfriendliness” as evidence of a hate crime.

The Met’s confusion about the definition of a hate crime comes after they were successfully sued earlier this month, and forced to pay out £2,750, for falsely accusing a man of hate on Twitter and harassing him and his family.

The official Twitter account of the Metropolitan Police LGBT Network accused a man of an “undercurrent of homophobia, racism and just general nastiness” and appeared to threaten his family members in 2016, as Breitbart London reported at the time.