Video footage appears to show the promotion’s most bankable star throwing a hand truck at a bus full of fighters on Thursday after a news conference for UFC 223 at Brooklyn’s Barclays Center.

The New York Police Department says McGregor was charged and is awaiting a court appearance Friday. He faces three counts of assault and one count of criminal mischief. It was not immediately known if McGregor has an attorney who could comment on his behalf.

UFC President Dana White said Friday he spoke to McGregor via text and the brawler said the confrontation “had to be done.”

“It was probably the worst conversation we ever had,” White told FS1′s “First Things First” on Friday morning. “We talked yesterday before he turned himself in.

“It’s not that I don’t think he understood what happened. He justified it. It was justified to him.”

White said the 29-year-old McGregor said he was sorry about the fighters who were injured, but, “this had to be done.”

Video showed McGregor with a group of people causing chaos Thursday as they took an elevator to the loading dock at Barclays Center. He can be seen tossing trash cans and being prevented from throwing a barricade at a bus during his unannounced appearance in New York.

UFC fighter Conor #McGregor has been charged with three counts of assault as video emerges of him attacking a rival's bus pic.twitter.com/6qVgq5Z4wc

Michael Chiesa was sent to the hospital with injuries sustained in the attack and was forced out of his scheduled fight against Anthony Pettis.

“A decision was made by the New York State Athletic Commission to pull me from UFC 223,” Chiesa tweeted. “I’m devastated to say the least. @showtimepettis I hope to run this match up ASAP. June 9th in your backyard. That’s all I have to say for now. Much love.”

Flyweight Ray Borg suffered multiple cornea abrasions in the wake of the McGregor attack and his fight against Brandon Moreno was also scratched.

“The organization deems today’s disruption completely unacceptable and is currently working on the consequences that will follow,” UFC said in a statement. “Individuals involved in the incident are not welcome at tomorrow’s ceremonial weigh-in or Saturday’s event at Barclays Center.”

McGregor hasn’t fought for UFC since November 2016 and was stripped this week by UFC President Dana White of the 155-pound championship he had never defended. White also said this week he did not expect McGregor to attend Saturday’s fights.

McGregor profanely responded on Twitter and wrote, “You’ll strip me of nothing.”

McGregor last fought in a boxing match he lost to Floyd Mayweather Jr. on Aug. 26, 2017. 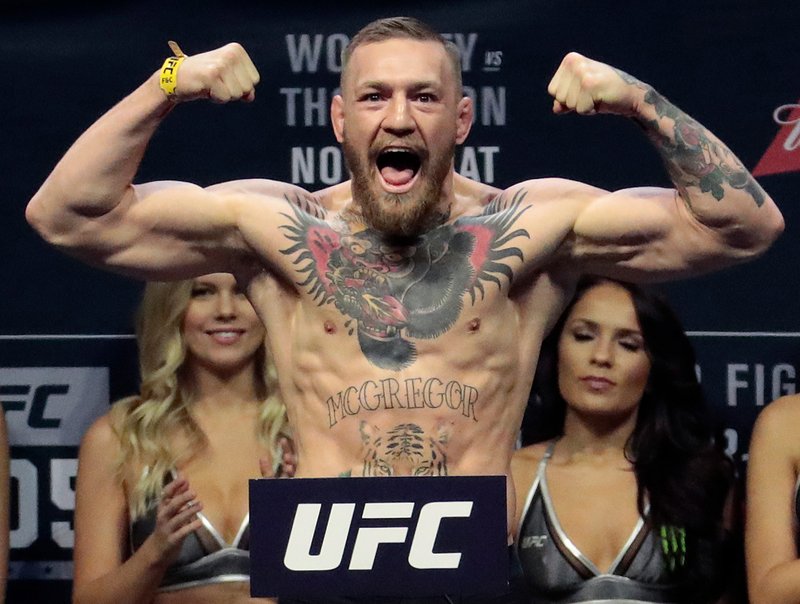 Nov. 11, 2016, file photo, Conor McGregor stands on a scale during the weigh-in event for his fight against Eddie Alvarez in UFC 205 mixed martial arts at Madison Square Garden in New York. (AP/Julio Cortez)

The popular Irishman is tight with UFC 223 fighter Artem Lobov, who was involved this week in a scuffle in a hotel with Khabib Nurmagomedov. Nurmagomedov fights Max Holloway on Saturday for the lightweight championship left vacant by McGregor.

McGregor once held the 145 and 155-pound championships at the same time and boldly stated he wanted an ownership stake in UFC.

But the trash-talking, egocentric has been out of the fight game except for his boxing dalliance with Mayweather that made him wealthy enough to never need to fight again. McGregor and his girlfriend welcomed their first child, a son, in May 2017.