Pro-EU globalists from Britain’s three major parties have started a campaign to retain the strongest possible ties with the European Union — effectively derailing Brexit and continuing EU membership in all but name.

Britain should remain in the European Economic Area and the Single Market as a supposed “safe harbour”, the group of formerly notable figures demanded, calling for what is called ‘Soft Brexit’ by them but no Brexit at all by others.

Ex-foreign secretary and a failed Labour leadership contender David Miliband, who now heads the George Soros-funded, pro-open borders International Rescue Committee, led the calls as co-author of a piece for the Mail on Sunday, and joined his allies on stage at a rice factory on Monday morning. 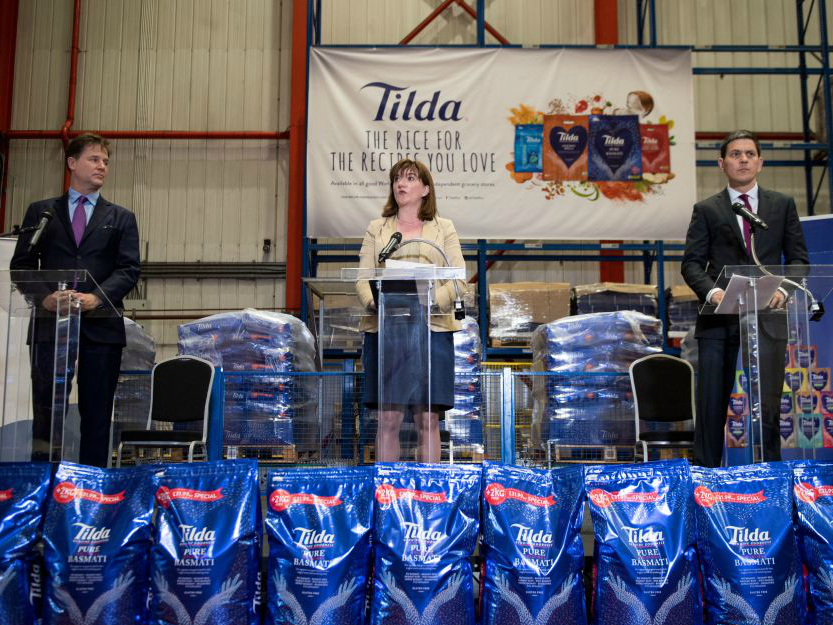 L-R: Nick Clegg, Nicky Morgan, and David Miliband stand surrounded by sacks of rice at the Tilda Rice Mill in Essex, England Monday morning as they delivered their vision for a Britain forced to remain in the Single Market against its own will / Getty Images

David Miliband formally left British politics five years ago, and this intervention has been portrayed as a comeback — although he has made a number of interjections during the Brexit debate so far.

He originally bowed out after a public feud with younger brother Ed Miliband, who defeated him to become Labour leader, taking up NGO work in New York. He has previously said Brexit is “the humiliation of Britain”, that there should be a second referendum to prevent Brexit going ahead, and that Brexit happening was the death of democracy.

Claiming that the country was being “held to ransom” by Brexiteers — who made up some 52 per cent of the voting public when the nation went to the polls to vote on Brexit in 2016 — the group wrote: “Less than six months before the deadline for concluding the terms of our departure, hard-Brexit demands are holding the country’s negotiating position to ransom.

“A hard Brexit won’t create a global Britain. It is merely a path to a fantasy island of our own where we will have reduced access to our largest markets and a diminished standing in the world.”

Yet the claims of the group were quickly refuted Monday morning by the chairman of the influential and Eurosceptic European Research Group, Conservative backbencher Jacob Rees-Mogg, who responded to comments by Clegg at the launch during a call-in to London’s LBC radio show, saying the Europhile had missed the point.

Claiming that Rees-Mogg and other Eurosceptics had become inadvertent protectionists, Clegg built on Miliband’s comments that Brexit wouldn’t create a global Britain — but Rees-Mogg hit back when the point was put to him live on air, remarking: “Sir Nick has rather missed the point. When we leave the European Union, we will be out of the protectionist customs union.

“The Customs Union applies tariffs of 22 per cent on average on food, it’s over 11 per cent on clothing and footwear. Once we’ve left, we can get rid of these as a unilateral act.

“We will be free to open up our markets to the huge benefit of consumers. We have a real opportunity for free trade… That’s where the benefits of leaving the European Union come from… I am the one who is for free trade. The Customs Union is a protectionist racket.”