The 44-page booklet was posted to the notorious Indymedia web platform that previously hosted the now-banned Linksunten website, which also posted tutorials on sabotage and other acts of terror and violence following last year’s riots at the G2o meeting in Hamburg.

Within the booklet, titled “Augsburg for Riot Tourists”, and on an external blog site mirroring the guide that features the Antifa logo, the far-left extremist group states: “We are calling for a revolt against the German collective on the occasion of the AfD party conference in Augsburg.” 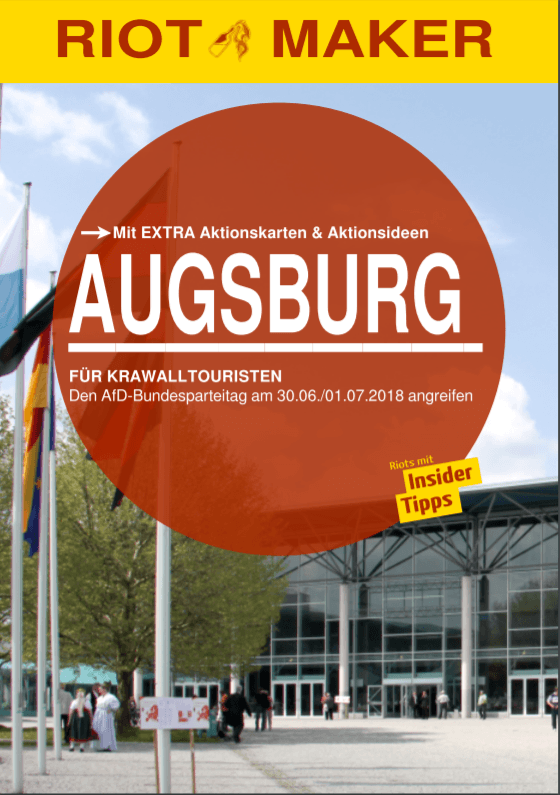 “Not only do we want to fight the AfD, we also want to direct our riot against every war memorial, against every repressive authority of the state, against every party bureau of a racist party, against any collaborator of a resurgent fascism,” with the group claiming that the Bavarian Christian Social Union are no different than the populist AfD.

The addresses of party offices of the AfD are published along with information on how activists can get to Augsburg for the conference which is scheduled to take place between June 30th and July 1st.

In a section of the blog site labelled “instructions” the extremist group show activists how to make paint bombs with traditional Christmas baubles and glass bottles, create traps for cars by laying down planks of wood with nails sticking out of them, and how to set cars on fire. “We wish you a lot of fun trying them out,” they write.

A screenshot of the Antifa blog calling for violence at the AfD conference with the Antifa logo visible in the bottom left. (Source: Screenshot)

Other targets listed include “collaborators” such as police stations, army barracks, and even a city library, all with helpful symbols identifying whether the locations have compresenive security coverage, or have CCTV cameras watching them.

The group also warns fellow extremists to wear gloves, even when picking up rocks to throw at buildings or people noting that it is possible their fingerprints could be lifted from the stones.

The instructions for violence are credited to “Prisma”, a notorious far-left terror manual that calls on extremists to commit violence and shows detailed diagrammes on building firebombs, sabotaging infrastructure, and avoiding police. The blog site also provides direct links to the Prisma terror document.

Far-left extremists have caused violence at previous AfD conferences including last year in which police in Hannover deployed water cannons against them.

In recent months, Antifa has claimed responsibility for the firebombing of a Turkish mosque, and a French branch of the group fighting with Kurdish forces in Northern Syria has promised to fight the French state with sabotage and to target police and intelligence officials.

The French Antifa, which was also present at the violence in Paris on May 1st, posted the video statement from their “comrades” in northern Syria in response to a series of evictions from squats and occupied university buildings.

In the UK, Antifa recently attacked a conference of the Generation Identity activist movement following the publication of the location of the private event by far-left organisation HOPE not Hate. One far-left extremist was arrested following the violence.