The UK branch of the far-left extremist group Antifa recently held a conference in which members of Red Action, a group known for their connection to the 1993 Harrods bombing, speaking alongside Danish Antifa extremists.

The meeting, which was held earlier this week in London on May 21st, was entitled “Building Antifascism in Our Communities” as part of the “Projekt Antifa” speaking tour and was hosted by the far-left Solstar Sports Association.

The speakers for the event were, according to the organisers, “several generations of Antifascists including members from Projekt Antifa in Copenhagen, Gary O’Shea of Red Action and comrades from Left Hook and AFA”.

Several of the groups have links to both violence and extremism. One of the groups, Red Action, was linked to the 1993 Harrods bombing in which two members, Patrick Hayes, a leading member of the group at the time, and Jan Taylor, were convicted of planting a bomb for the IRA and sentenced to 30 years in prison each.

When police attempted to arrest the pair two months after the bombing, they were met with gunfire, though no police were injured in the arrest. After taking the two Red Action members into custody, police found 22lbs of Semtex, a large stockpile of homemade explosives, several handguns, ammunition, and remote detonators for potential bombs.

The meeting and public association with Red Action come after Antifa in Germany released a “riot tourist” handbook which called on other far-left extremists to attack targets at the upcoming conference of the anti-mass migration populist Alternative for Germany (AfD) to be held in Augsburg next month.

The handbook also listed a blog site which then linked to another booklet entitled “Prisma” which lists instructions on how to build firebombs, including those with remote detonators, how to evade police forensics, and even instruction on how to sabotage power lines. 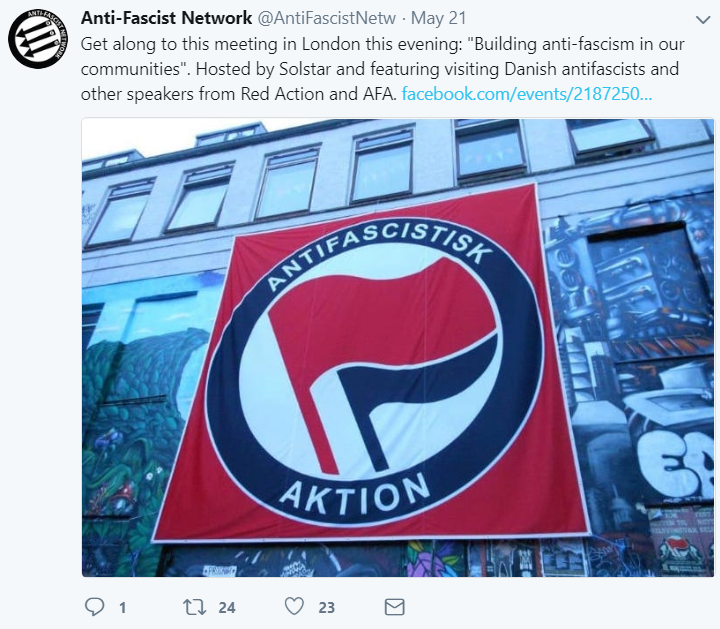 The event was shared on Twitter by the account “Antifascist Network” which has previously been tweeted at by the head researcher of the “anti-hate” organisation HOPE not Hate (HnH) Dr Joe Mulhall.

Mulhall asked the account, along with several other Antifa accounts, their “thoughts” on a mini-documentary he had worked on for HnH in which he visited the Kurdish region of Northern Iraq in 2014.