The pro-Saudi segments praising the ruler’s “Vision 2030” reform programme were an attempt to influence British public opinion and violated the UK’s ban on paid political advertising, Ofcom said in a ruling published Tuesday.

The adverts were broadcast 56 times on UK television channel Sky 1 around the period that Saudi Crown Prince Mohammed bin Salman visited the UK.

Sky said a third party was responsible for checking the ads and the broadcaster will not be punished.

In addition to the TV ads, the Crown Prince’s visit saw large paid-for pro-Saudi posters across London and paid-for advertising in UK newspapers, including The Guardian.

Newspaper ads are not banned and The Guardian insisted its editorial position was not influenced. 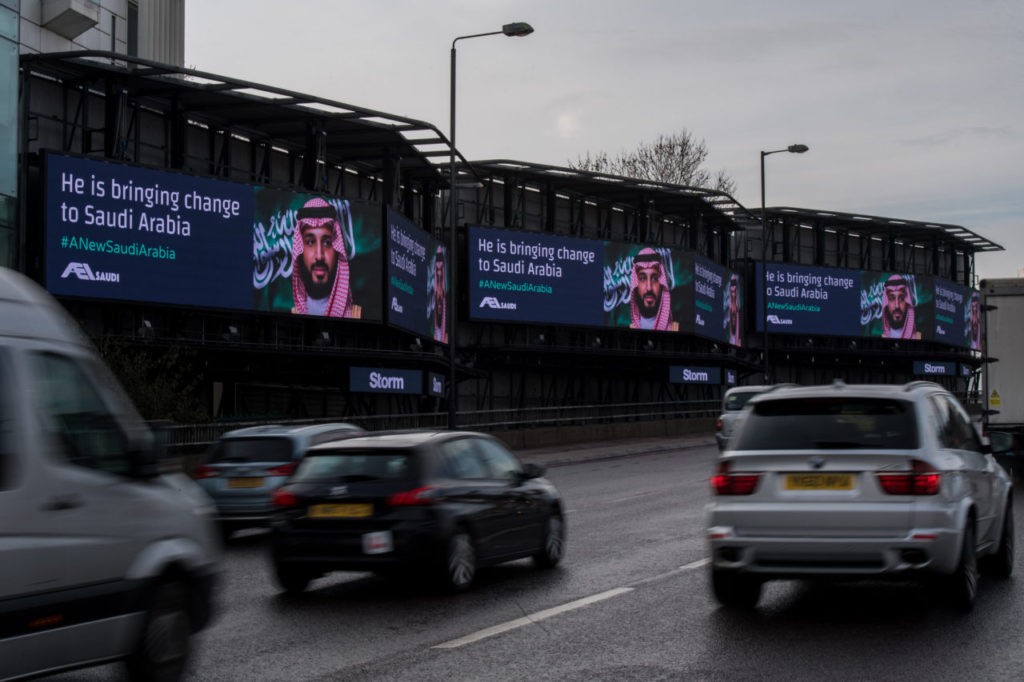 Electronic billboards show adverts for Saudi Crown Prince Mohammed bin Salman with the hashtag ‘#ANewSaudiArabia’ next to the A4 West Cromwell Road on March 7, 2018, in London, England. (Chris J Ratcliffe/Getty)

The left-wing paper described the Ofcom ruling as a “ban”, reporting: “Saudi Arabia has in effect been banned from paying to promote its reform agenda on British television.”

Ofcom said it considered “controversy and debate” in the UK including “the UK’s relationship with the Kingdom of Saudi Arabia” and “issues such as freedom of speech and human rights”.

“Things are undoubtedly changing in Saudi Arabia,” a narrator in the ads said, with footage of women driving, entertainment, cultural events, and industry in the repressive Islamist state.

“Key world partnerships are at the heart of this shift, mainly with the United Kingdom,” the narrator adds.

“Saudi women have been allowed to drive and cinemas are set to open again this year… The entertainment sector is bracing itself for a new era,” they boast.

Ofcom said it has a statutory duty to secure objective standards including “the prohibition on political advertising” on television and radio.

Exceptions are made for political parties ahead of elections, with those standing allocated a set amount of airtime. The ads are also clearly marked as political messaging.