Theresa May has said Facebook is “allowing people-smuggling adverts”, revealing the UK government is aware of more than 500 pages and posts allegedly advertising and facilitating illegal crossing.

The Prime Minister told a European Union (EU) meeting in Austria on Wednesday that the social media giant was acting as a “travel agent”, with criminals offering packages for dangerous illegal crossings to Europe and even discounts for children.

Mrs May argued that “online platforms have no respect for borders”, putting pressure on the liberal tech website to stop encouraging illegal migration.

Breitbart London exposed numerous such pages last year, with some of them –- with tens of thousands of members and offering products including fake passports, flights, and marriages –- still active today.

The posts Breitbart London found are mainly in Arabic and in open groups. Sometimes moderators deter people from openly making sham marriage offers and agreeing on deals in the public forum, but many use them to make initial contact and continue talks in private. 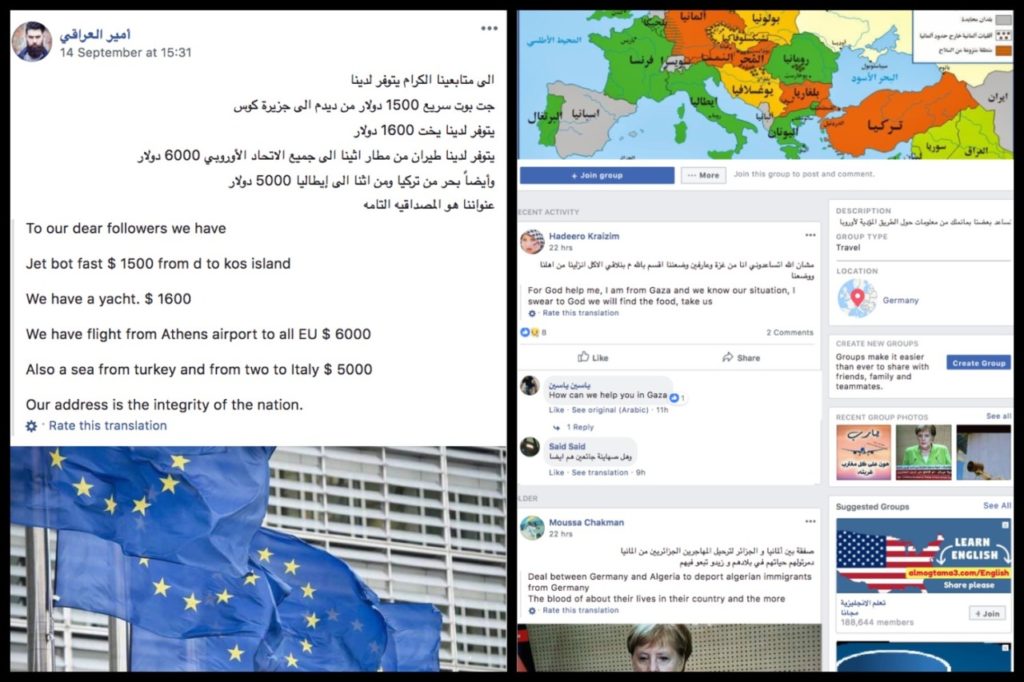 The United Nations refugee agency UNHCR said in 2016 that they had also discovered people smugglers using Facebook to entice migrants to make illegal trips to Europe.

Commenting on the issue on Wednesday night, the Prime Minister said that not enough action had been taken. According to the Express, she said: “It is too easy for traffickers and smugglers to advertise their services online.

“We must now match our pursuit of people smugglers and traffickers with a renewed effort to prevent immigration crime from occurring in the first place.

“To achieve this, we must tackle the enabling environment – all those factors that make it far too easy for criminal networks to emerge and grow, putting migrants’ lives at such risk.”

Mrs May said that many migrants were tricked into believing they are paying for “safe, normal” transportation to the European Union, including paying thousands for seats in overcrowded dinghies.

The Prime Minister declared the UK would be willing to share cyber-policing expertise with other member states of the bloc to help tackle the problem, implying corporation after Brexit.

If European nations do not work together, traffickers will be able to “exploit our weakest link”, she said.