The United Kingdom’s can take Theresa May’s “worst deal in history” negotiated settlement with the European Union or leave it, but there will be no renegotiations at all, European Council President Donald Tusk warned as he arrived for this weekend’s G20 summit in Buenos Aires, Argentina.

Echoing talking points already repeated in near-identical language by leaders including Theresa May and Jean-Claude Juncker themselves to the effect that there could not be any deal to the United Kingdom except the one already agreed, Polish politician turned Eurocrat Donald Tusk said at the globalist summit the only other options meant no deal.

That could take the form of not leaving the European Union at all, or leaving with no deal — a state of affairs enthusiastically advocated by long-time Brexit campaigners like Nigel Farage and Jacob Rees-Mogg as a true Brexit which would leave Britain able to pursue its own destiny — but there would be no renegotiation.

Mr Tusk said in Buenos Aires Friday morning: “Many leaders will certainly have questions about Brexit, therefore let me say this. The European Union has just agreed an orderly divorce with the United Kingdom.

“A few days before the vote in the House of Commons, it is becoming more and more clear that this deal is the best possible – in fact, the only possible one.” 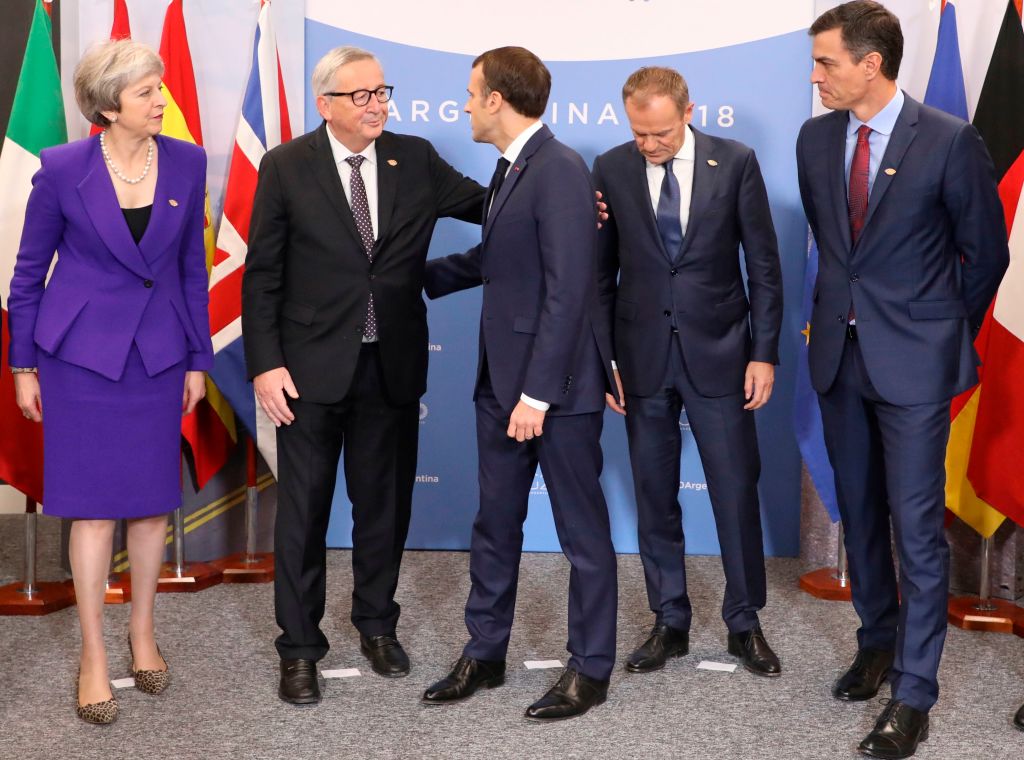 (L-R) British Prime Minister Theresa May, the president of the European Commission Jean Claude Juncker, French President Emmanuel Macron, the president of the European Council Donald Tusk and Spanish Prime Minister Pedro Sanchez prepare to pose as they meet for a working session prior to the G20 Summit on November 29, 2018, in Buenos Aires. / LUDOVIC MARIN/AFP/Getty Images

He continued: “If this deal is rejected in the Commons, we are left with… an alternative: no deal or no Brexit at all. I want to reassure you that the EU is prepared for every scenario.”

British Prime Minister Theresa May is also attending the G20 summit, flying into Argentina on Thursday night. Speaking to reporters en route to the meeting, the Prime Minister again talked down other options, rejecting Canada or Norway style deals in favour of her own.

Missing the opening sessions of the globalist talking shop was German Chancellor Angela Merkel, who saw the serious reliabilities plaguing the German military’s combat aircraft spread to her personal government jet, which had to turn back an hour into the flight to South America and land in West Germany.