Anti-Brexit counter-protesters were arrested for assault and offensive weapon possession at a UKIP march against Theresa May’s “worst deal in history” with the EU on December 9th.

The “Brexit Means Exit” march and “Brexit Betrayal” rally organised by UKIP leader Gerard Batten with the support of Tommy Robinson — a controversial figure with a loyal following who the MEP recently appointed as an adviser on child grooming gangs — gathered several thousand people in London on Sunday to express their opposition to the prime minister’s deal with the EU, which Batten argues does not deliver Brexit in any meaningful sense.

Despite fears that attendees associated with street organisations like the Democratic Football Lads Alliance (DFLA) could have ended up clashing with police, reports indicate that the Brexit demonstration went off peacefully.

This was not the case at a substantial anti-Brexit counter-protest, however, with the left-liberal Guardian reporting with apparent reluctance that London’s Metropolitan Police had arrested at least three people for assault, possession of an offensive weapon, and a public order offence.

Quite the contrast to the peaceful & well organised Brexit Means Exit rally down the road. https://t.co/0YlzcKJCIx

The counter-protest was well attended, with Palestinian and European Union flags displayed prominently among its members alongside “Refugees Welcome” and “Stand Up to Racism” placards.

Counter-protesters claim to have assembled some 15,000 people against 3,000 Brexit marchers — but such claims are hard to verify, as the police no longer issue official estimates for such events.

The Guardian said they spoke to counter-protesters who estimated their numbers at a more modest 8,000, while Brexit march organisers told Breitbart London their own event was attended by a more substantial 10,000.

Speaking to the rally, Batten quoted former prime minister David Cameron’s promise to the British people ahead of the 2016 referendum: “This is your decision. Nobody else’s. Not politicians’. Not Parliament’s. Not lobby groups’. Not mine.

“You, the British people, will decide. At that moment, you’ll hold this country’s destiny in your hands.

“This is a huge decision for our country, perhaps the biggest we’ll make in our lifetimes — and it will be the final decision.

“So, to those who suggest that a decision in the referendum to Leave would merely produce another, stronger renegotiation, and then a second referendum in which Britain could stay, I say: think again.

“The renegotiation is happening right now, and the referendum that follows will be a once-in-a-generation choice: an ‘In’ or ‘Out’ referendum.

“When the British people speak, their voice will be respected, not ignored.

“If we vote to Leave, then will leave. There will not be another renegotiation and another referendum.”

“Mr Cameron could not have put it plainer than that,” the UKIP leader added.

WATCH | "Your decision. Not politicians. Not Parliament. Just you."

This is what we were told by the leader of our country when casting our vote. Now our Remain Parliament wants to take back control from the people because we "got it wrong". Remember MPs, you work for us! 👊 pic.twitter.com/mYwWPNsNdr

Mr Batten’s rally was not without its detractors, with prominent Brexiteers such as former UKIP chief Nigel Farage warning it could have damaged the cause if it had descended into violence, particularly as it was taking place just two days before the “meaningful vote” on Mrs May’s deal was scheduled to take place in the House of Commons.

Mr Farage also resigned his membership of UKIP over the direction Mr Batten has taken the party more generally, and has been followed by a number of other MEPs and other elected representatives. 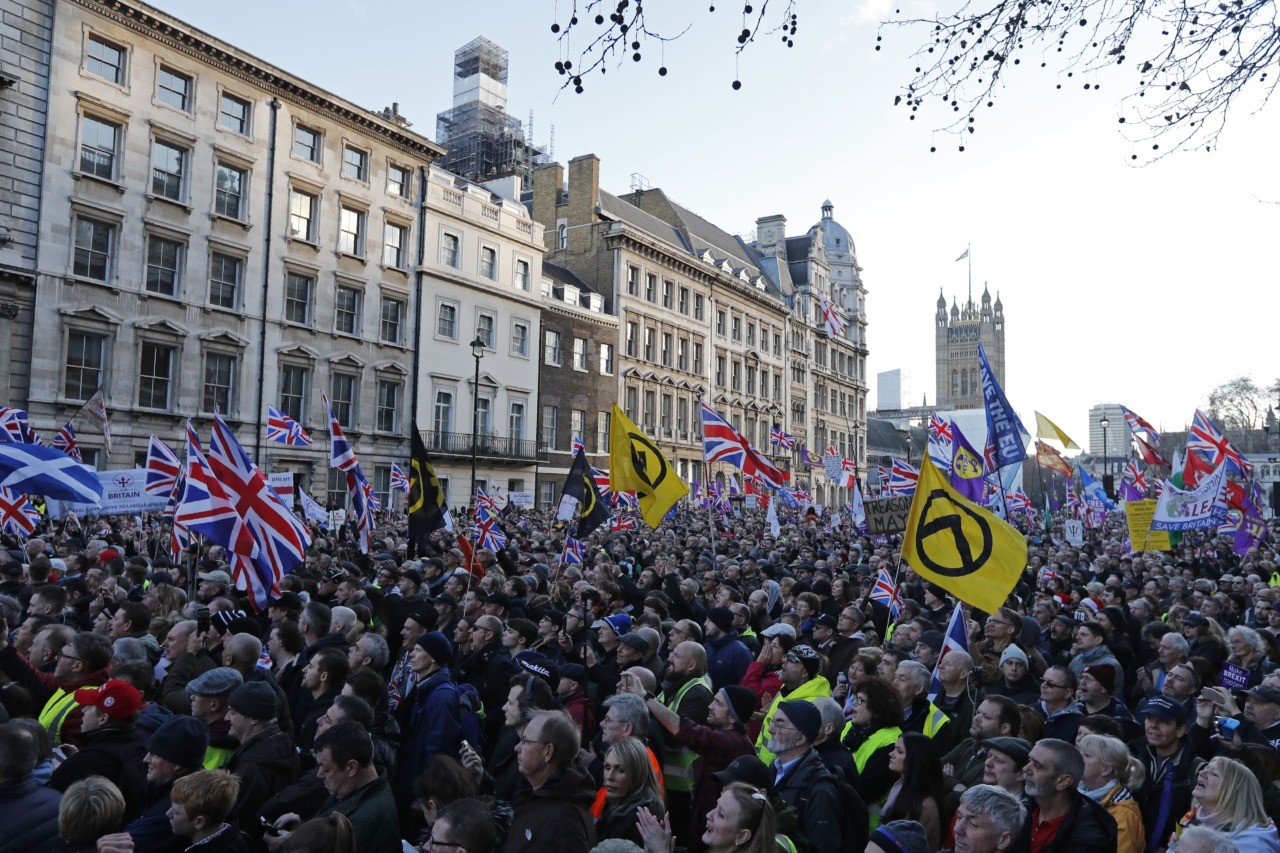 Protesters hold up placards and Union flags as they attend a pro-Brexit rally promoted by UKIP (United Kingdom Independence Party) in central London on December 9, 2018, as the crucial vote on the Brexit deal in the House of Commons looms. (ADRIAN DENNIS/AFP/Getty Images)