Ms Wilson-Raybould gave testimony before the Canadian House of Commons justice committee for several hours on Wednesday, speaking out against members of staff and Prime Minister Trudeau attempting to interfere with an investigation into the SNC-Lavalin corporation, The Globe and Mail reports.

Accusations that the prime minister and the Prime Minister’s Office (PMO) interfered with the SNC-Lavalin investigation first emerged on February 7th. 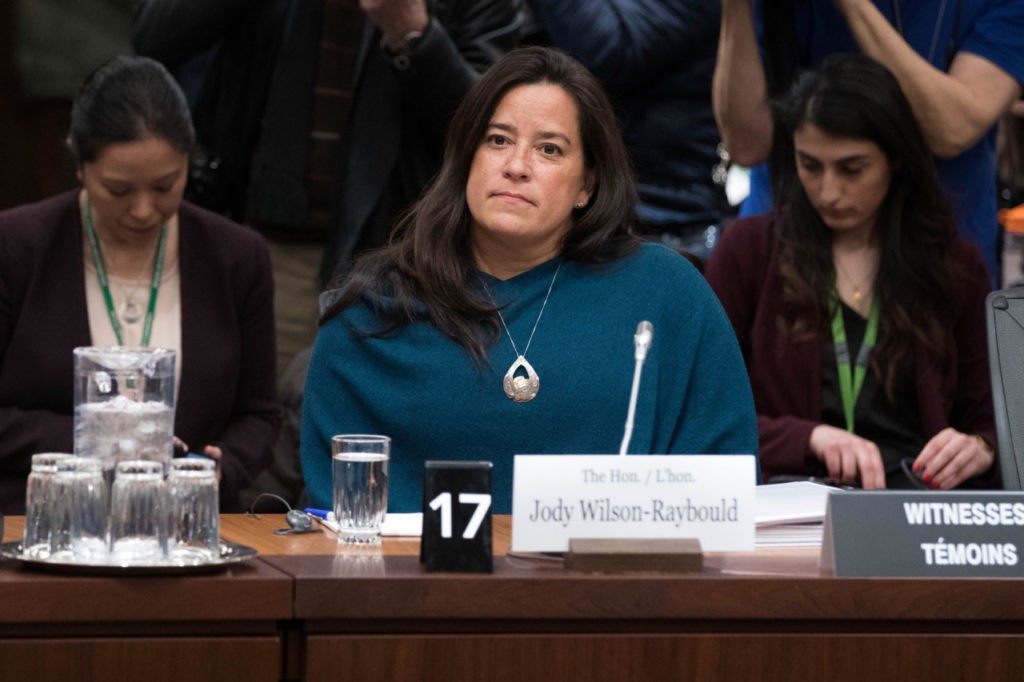 Former Canadian Justice Minister Jody Wilson-Raybould arrives to give her testimony about the SNC-LAVALIN affair before a justice committee hearing on Parliament Hill in Ottawa on February 27, 2019. (Photo: LARS HAGBERG/AFP/Getty Images)

The engineering company, which is based in Quebec, was accused of engaging in bribery in Libya in efforts to secure lucrative contracts in the country.

Since the accusations were made public, further allegations have revealed that the corporation may also have gone as far as paying for prostitutes for Saadi Gadhafi, son of former Libyan dictator Moammar Gadhafi, during a visit to Canada in 2008.

Receipts claim that the company spent as much as $30,000 on prostitutes for Gadhafi while he was allegedly in Montreal and Toronto at the invitation of the company to learn English.

Initially, after the first Globe and Mail report on the SNC-Lavalin affair, the accusations were dismissed by Trudeau and the PMO.

Only weeks later, Trudeau’s chief adviser, and one of his closest confidants, Gerald Butts resigned abruptly from his position as principal secretary in the PMO.

Butts denied that his resignation had anything to do with the SNC-Lavalin affair saying accusations that he or others put pressure on former Attorney General Wilson-Raybould were “simply not true.”

Until Wednesday, Ms Wilson-Raybould had been unable to comment on the matter but was free to do so in front of the justice committee.

In her testimony, Wilson-Raybould made bombshell allegations towards Trudeau and the PMO saying, “For a period of approximately four months between September and December 2018, I experienced a consistent and sustained effort by many people within the government to seek to politically interfere in the exercise of prosecutorial discretion in my role as the Attorney General of Canada in an inappropriate effort to secure a Deferred Prosecution Agreement with SNC-Lavalin.”

“These events involved 11 people (excluding myself and my political staff) – from the Prime Minister’s Office, the Privy Council Office, and the Office of the Minister of Finance,” she added.

One of the most damning pieces of testimony involved an alleged discussion between Wilson-Raybould and Trudeau:

The Prime Minister asks me to help out – to find a solution here for SNC – citing that if there was no DPA there would be many jobs lost and that SNC will move from Montreal. In response, I explained to him the law… I told him that I had done my due diligence and made up my mind on SNC and that I was not going to interfere with the decision of the DPP.

… At that point the PM jumped in stressing that there is an election in Quebec and that “and I am an MP in Quebec – the member for Papineau.” My response – and I remember this vividly – was to ask the PM a direct question while looking him in the eye – I asked: “Are you politically interfering with my role / my decision as the AG? I would strongly advise against it.” The Prime Minister said “No, No, No – we just need to find a solution.”

The former Attorney General named several prominent politicians and staff who were engaged in pressuring her, some with “veiled threats.”

The scandal has rocked the Canadian political scene and has led to calls from Conservative opposition lead Andrew Scheer for the prime minister to resign from office.

Justin Trudeau has lost the moral authority to govern and must resign. Speaking LIVE to the media right now: https://t.co/BFhSYFiCVE

“As Ms Wilson-Raybould has so clearly articulated, the people Canadians entrusted to protect the integrity of our very nation were instead only protecting themselves and their friends,” Scheer said and added, “Mr Trudeau can no longer, in good standing and with a clear conscience, lead this great nation.”

Prime Minister Trudeau, meanwhile, rejected calls for his resignation saying that voters would get to decide their next prime minister at the upcoming national elections in October.