Nothing lasts forever — and that’s what hurts the most about the near-loss of Notre Dame Cathedral: what it tells us about our own mortality, about the unpredictability of the future and about the fragility of even our greatest creations.

The Pyramids, Stonehenge, the Taj Mahal, the Colosseum, Notre Dame Cathedral… there are man-made wonders so spectacular, so iconic, so revered, that it’s quite unthinkable to imagine a world without them.

Yet now the unthinkable has almost happened. Like a jigsaw puzzle with a piece missing, our universe is never going to look quite the scene.

Though I’d never actually visited Notre Dame it was high on my bucket list — as I’m sure it was on yours. How could it not be?

Together with the Eiffel Tower and the Mona Lisa in the Louvre, Notre Dame was the defining feature of Paris — and the one imbued with by far the most history.

It’s where Henry VI of England was crowned King of France; where Mary Queen of Scots married the Dauphin; where Napoleon I was crowned Emperor.

It’s also of course the setting for Victor Hugo’s The Hunchback of Notre Dame, the subject of paintings by numerous artists including Picasso and Matisse, and the setting for countless movies from An American In Paris to Amelie to the Disney animated feature Ratatouille — where it is invariably used as visual shorthand for the romance of Paris.

You don’t need to be Catholic or even Christian to feel its loss almost as keenly as you would a personal bereavement. Notre Dame was an architectural glory which belonged to the entire world, representing one of the highest pinnacles of human craft and ingenuity.

When Lord Clark made his landmark 1969 documentary series Civilisation and famously asked: “What is civilisation? I don’t know. I can’t define it in abstract terms, yet. But I think I can recognise it when I see it.” Then, turning to Notre Dame behind him, he added: “And I’m looking at it now.”

“What is civilisation? I don’t know. I can’t define it in abstract terms, yet. But I think I can recognise it when I see it.” Turning to Notre Dame, Clarke added: “And I’m looking at it now.” pic.twitter.com/uMt9PvHD57

The enemies of civilisation understand this too. It’s why, amid the tears and heartbreak spreading far beyond Paris to every corner of the world, an ugly minority still found cause to celebrate.

These are the same sort of people who were cheering the destruction of the Twin Towers on 9/11. They understand, perhaps almost better than we do, the importance of history and culture to our civilisation’s security, wellbeing and sense of purpose.

That’s why, for example, the Taliban went to such lengths to destroy the Buddhas of Bamiyan. Why ISIS, with loving sadism and painstaking care, destroyed the ancient city of Palmyra. The Islamic State understood that no matter how many Yazidis you rape, crucify and enslave, no matter how many innocents you decapitate, nor how many prisoners you shoot, torture or burn alive, it will never have quite the same resonance as a cultural masterpiece obliterated from the map.

On this occasion, it seems likely the fire was an accident caused by one of those infuriating accidents which so often seem to occur in historic buildings under renovation.

But it’s perfectly understandable that on Twitter yesterday there was some speculation that it might have been another act of terrorism.

After all, it happened just as a Muslim migrant was tried for causing extensive damage – especially to the organ and stained glass windows — to the other great cathedral masterpiece of Paris — Saint-Denis Basilica, home of the tombs of former French kings.

There have been many similar incidents.

As Breitbart News has reported:

Vandalism of churches across France has become a major issue, with nine churches across the country vandalised in just 11 days in February. Some of the damage had included thefts, while others featured grotesque acts such as the smearing of faeces on the walls of a church in Nîmes.

Just last month the second largest church in Paris was damaged by fire, which police have said was deliberately started. Dramatic images from the scene showed flames pouring out of a “massive” porch door and stained glass window, although fortunately the Paris Pompiers were able to put out the blaze before it spread to the rest of the building.

What I think should concern us almost as much as these Islamism-inspired acts of desecration is the reluctance of so many liberal Westerners to acknowledge that there’s even a problem here.

Yesterday social media was awash with virtue-signallers apparently more upset by the outrageous suggestion that Muslim terrorism might have been responsible than they were at the actual destruction of the cathedral itself.

This self-righteous buffoon, for example, got himself into a lather — and demanded I should be banned from Twitter — merely because I had retweeted the Paul Joseph Watson tweet above. 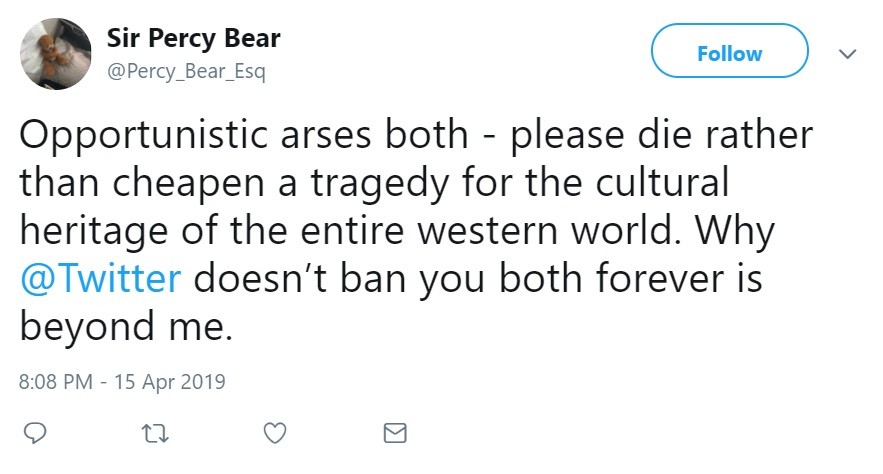 It annoyed me not least because I hadn’t even been trying to implicate Muslims in the destruction of the cathedral. Clearly, it was far too early to say and would have been irresponsibly speculative. And for the record, I am glad that Muslims had nothing to do with this, for I think the fall-out would have been horrendous.

The inference was entirely in his hysterical imagination.

This character’s craven, surrender-monkey attitude — don’t report on uncomfortable topics, far better to bury your head in the sand lest passions become further inflamed — is unfortunately characteristic of the mindset that Douglas Murray brilliantly analyses in his bestseller The Strange Death of Europe.

In order to defend our civilisation, Murray argues, the first step is to understand what it is we’re trying to defend — and why it’s worth defending.

Murray reiterates this point in an excellent piece for the Spectator about the Notre Dame tragedy.

There will be recriminations, of course. There will be disputes about budgets, and overtime and safety standards and much more. It is worth reading this piece from two years ago about the funding problems that existed around the cathedral’s restoration. But if Notre Dame can burn then all this is as nothing, because it tells us something too deep to bear. As I said a couple of years ago in a book, in some ways the future of civilisation in Europe will be decided by our attitude towards the great churches and other cultural buildings of our heritage standing in our midst. Do we contend with them, ignore them, engage with them or continue to revere them? Do we preserve them?

Though politicians may imagine that ages are judged on the minutiae of government policy, they are not. They are judged on what they leave behind: most of all on how they treat what the past has handed into their care. Even if today’s disaster was simply the most freakish of accidents, ours would still be the era that lost Notre Dame.

Yes. The near destruction of Notre Dame is indeed a terrible indictment of our times. It shows — not that it needed showing — that we are a civilisation in decline. We have grown spineless, decadent, complacent. We are too willing to squander taxpayers’ money on fashionable nonsense like the climate change scare and not nearly prepared enough to spend money where it truly matters, preserving the fabric of our irreplaceable monuments for the enjoyment and edification of future generations.

Let us hope that this narrow escape by Notre Dame acts as a lesson to us all on the things in life that are truly worth fighting for. Somehow, though, I doubt it will.

French interior minister says the structure of the Cathedral has been saved, despite having lost its roof https://t.co/c985yv8BwZ pic.twitter.com/p4PLqrWi77