Social media has seen a variety of reactions following the tragic fire at Paris’ iconic Notre-Dame cathedral Monday, but some users chose to mock and laugh at those expressing sorrow.

Several accounts on Twitter expressed mockery over the loss of the 850 plus year-old cathedral, which has become an icon of the city of Paris since the Medieval era.

Twitter user @SarahSahim, a writer for Rolling Stone magazine, Teen Vogue and the Independent newspaper wrote, “Notre-Dame burning is cosmic karma for all the historical sites and artefacts France destroyed and stole when being colonialist scum.” 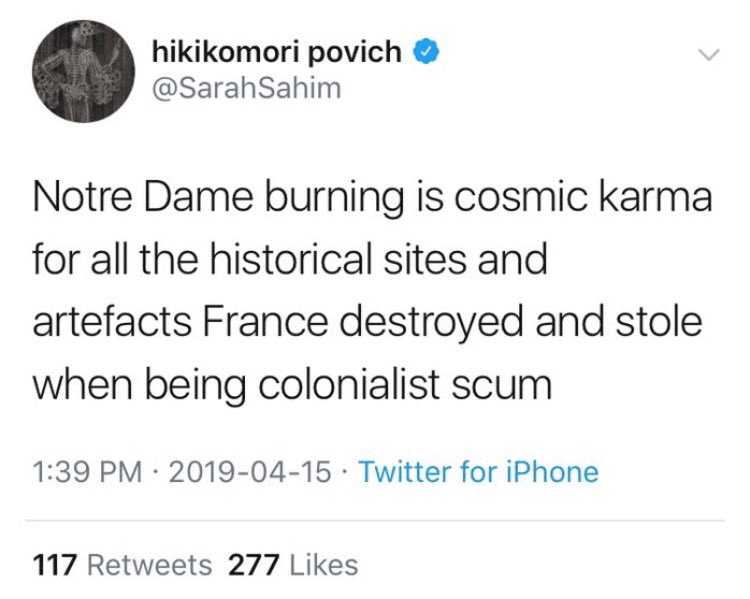 Another Twitter user, @gaygadott called the fire, “the most aesthetically pleasing visually (sic) I’ve ever seen,” while the account for a U.S.-based far-left pro-Palestinian publication called the Jewish Worker said, “Genuinely awful but if you mourn for this one building and not, say, the entirety of Syria, your white supremacy is showing.”

Genuinely awful but if you mourn for this one building and not, say, the entirety of Syria, your white supremacy is showing. https://t.co/5T916AVkqG

On French social media, there were also mocking reactions to the tragedy including well over a thousand Facebook users who used the laughing emoji reaction to a Facebook live stream about the fire.

Others on French social media attempted to link today’s events to a tweet, written prior to the fire, by a French teen named Hugo who mocked the Muslim pilgrimage to Mecca.

Hugo had received a number of death threats as a result of his tweet, primarily from Muslims.

The teen later apologised saying, “I never wanted to offend anyone in this tweet to stop wanting violence for nothing, there is much worse in this world and on Twitter.”

The hashtag #JeSoutiensHugo or “I support Hugo” was used by supporters of the teen and then later by Muslims on social media who linked the Notre-Dame fire as some sort of retribution for the teen’s tweet. One such user, with the Twitter handle @AhmedMadidus, wrote, “here you do not care about Islam. You support a guy who makes fun of Mecca. Allah quickly answered.” 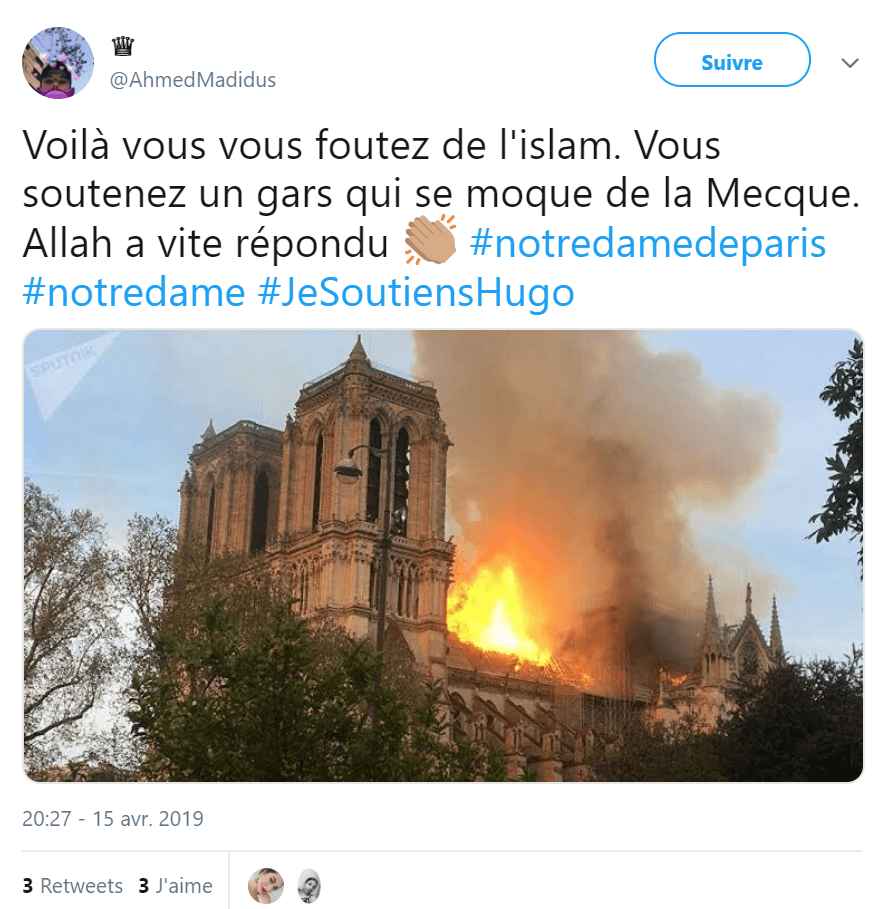 The iconic cathedral had been undergoing restoration before the blaze on Monday, and while some have suggested the fire may have been an accident related to the restoration process, investigators have not given any definitive answers as to the cause of the fire.