Thousands of protestors from the hard-left group Extinction Rebellion caused misery, congestion, and disruption across London on Monday.

Ostensibly their mission was to draw the world’s attention to the largely imaginary threat of ‘climate change’.  In reality, it was just the usual suspects employing the fig-leaf of environmentalism to justify yet another attempt to take down the capitalist system through mob bullying and economic terrorism.

Some of the mob caused damage at the headquarters of the oil company Shell. According to The Guardian:

Protesters also shattered a glass revolving door at the headquarters of the fossil fuel company Shell and smeared its facade with graffiti and black paint. Hundreds of people soon stopped to watch as the protest outside Shell continued. Two activists climbed above the entrance, writing “Shell knew” and “Shell knows”. Activists said at least one arrest had been made. 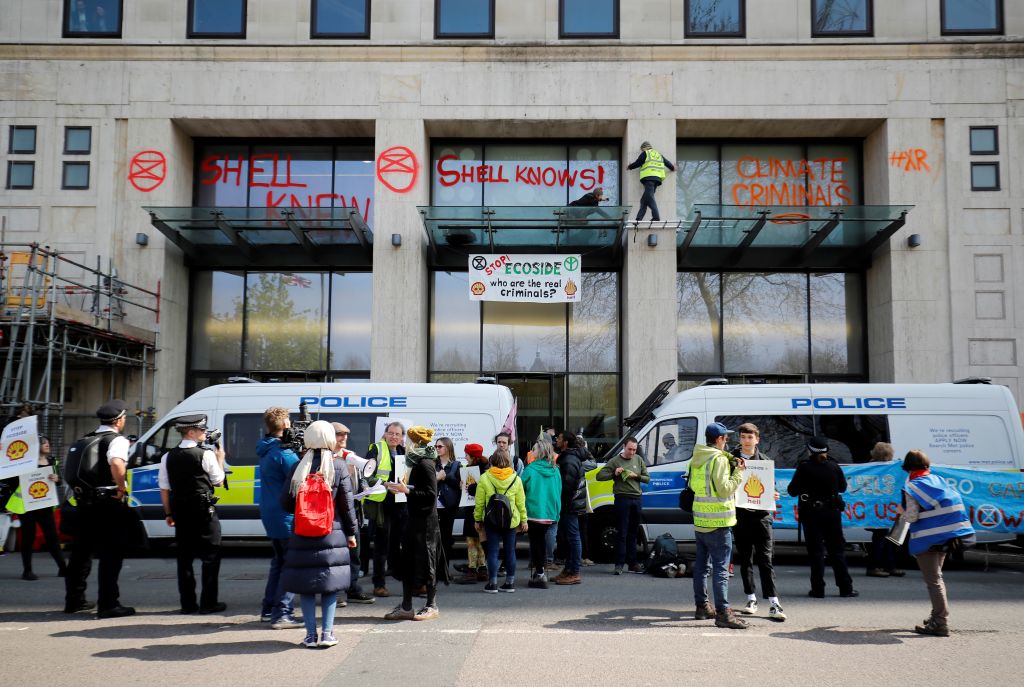 Activists stand on the porch covering the entrance to the Shell Centre, the UK offices of Royal Dutch Shell, as demonstrators surround the building during an environmental protest by the Extinction Rebellion group in London on April 15, 2019.  TOLGA AKMEN/AFP/Getty Images

The organisers are threatening to continue the protests for at least a week and to spread their activities to “80 cities across 30 countries.”

Quite what they are hoping to achieve is anyone’s guess, not least because their three demands are totally impractical, unscientifically grounded, and impossible to deliver.

Their first impossible demand: “Government must tell the truth by declaring a climate and ecological emergency working with other institutions to communicate the urgency for change.”

But the “climate and ecological emergency” is a fabrication: if the government did tell the truth, it would say the exact opposite of what the protestors are demanding. Also for decades governments have bent over backwards to accommodate the junk-science-driven demands of green activists. They could hardly do more than they are already. 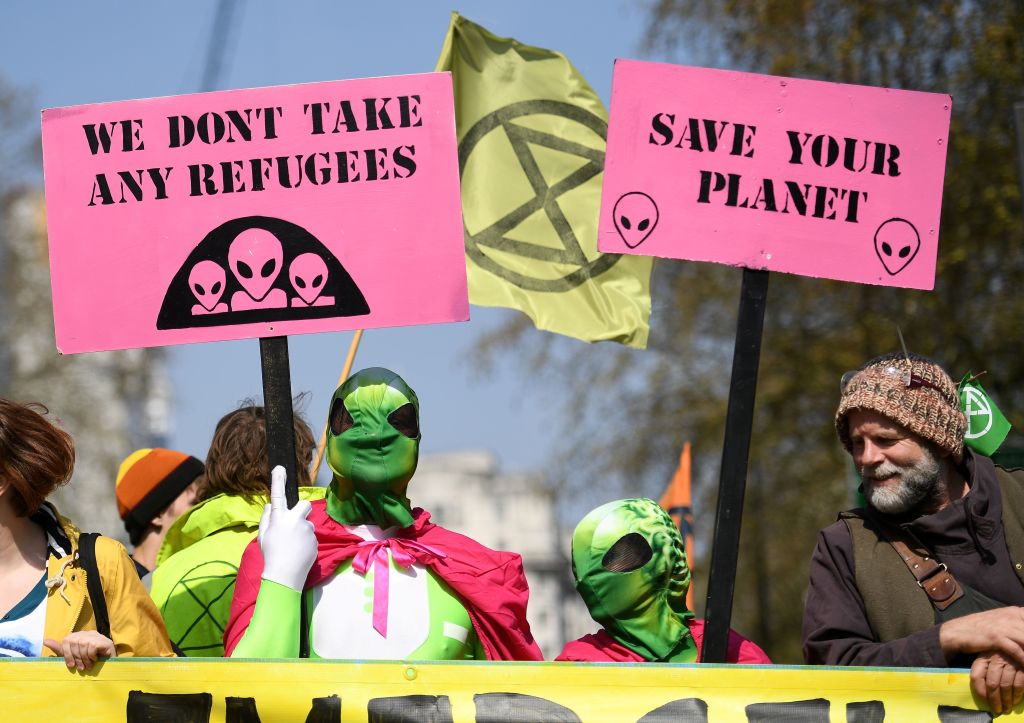 Environmental protesters from the Extinction Rebellion group stage a demonstration in a road near Marble Arch in London on April 15, 2019. DANIEL LEAL-OLIVAS/AFP/Getty Images

But biodiversity loss is largely the result of the world’s growing population and controlling this is not within the power of any Western government. Reducing greenhouse emissions to net zero would entail obliterating the global economy — and since there is no scientific evidence to support adopting so radical a measure no rational government is likely to take it, nor would any electorate support it.

Their third impossible demand: “Government must create and be led by the decisions of a Citizens’ Assembly on climate and ecological justice.”

But that’s not liberal democracy as any Western nation understands it. That would be more akin to the mob rule which applied during the Terror of the French Revolution or in Russia in the early days of Bolshevism. Who, in any case, would be on these Citizen Assemblies? How could such aggressive, left-wing activists be trusted to make sensible decisions in a field which would impact so heavily on the broader economy as well as on matters like personal freedom? 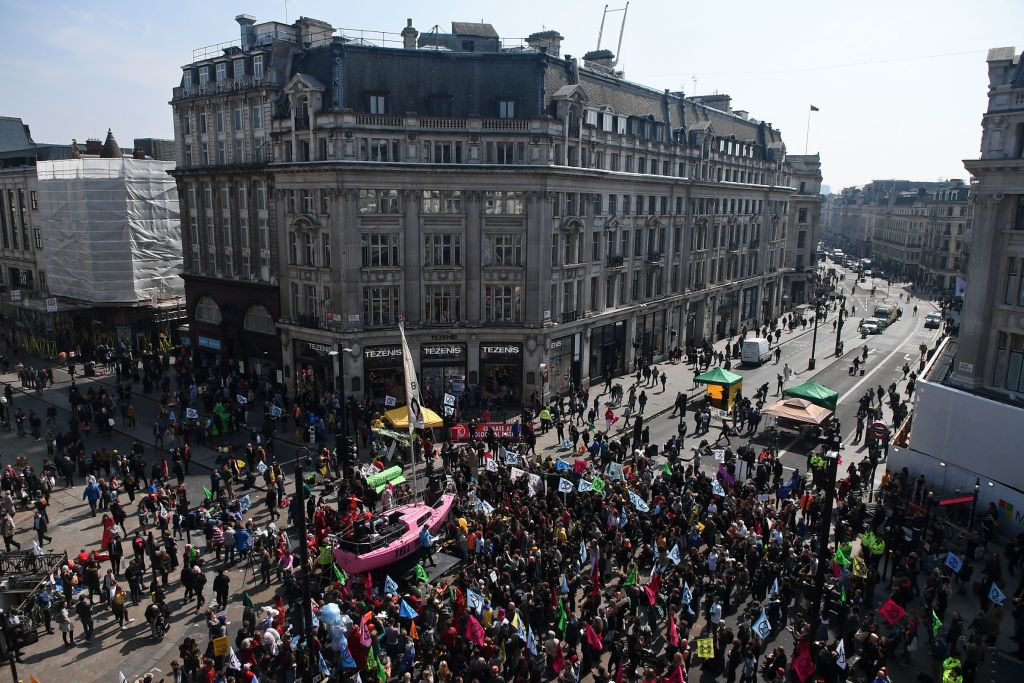 Environmental protestors from the Extinction Rebellion group gather around a pink boat in Oxford Circus as they take part in a demonstration at the junction of Oxford Street and Regent Street in London on April 15, 2019. DANIEL LEAL-OLIVAS/AFP/Getty Images

Reading some of The Guardian‘s reports on the protest, you get a terrifying insight as to how Britain might look under a Jeremy Corbyn administration.

Alex Armitage, an NHS doctor, had been drafted in as a spokesperson for the Marble Arch rebellion. He said he hoped that the police could be brought on side. “Eventually if this is going to work, if we are going to have the massive change in the economy that we need to protect ourselves from climate change, we are going to need to the police to be unwilling or unable to restore order, and then the government has no option to negotiate,” he said. “It all seems really grandiose – but so is the scale of the problem facing us.”

Roger Hallam, one of the leaders of the movement, said nothing like this had been seen on the streets of London for decades. “What’s amazing about this is for 30 years you have just had that closing up of public space – “you can’t do this, you can’t do that, you’ve got to finish then.”

“Suddenly what Extinction Rebellion has done is actually say: ‘we are doing this’. And the state is so weak through austerity that they can’t stop us.”

Well, I for one do not welcome our future insect overlords.

Here is a doctor so buoyed up with his virtue as a National Health Worker that he simply has no idea that without a functioning economy there’d be no one to pay for his generous salary.

Here is one of Extinction Rebellion’s leaders Roger Hallam showing his true colours. The environment doesn’t even get a mention. It’s about the buzz of closing down the streets, flexing his muscles, and smashing the enfeebled state.

Nothing to do with saving the planet at all. 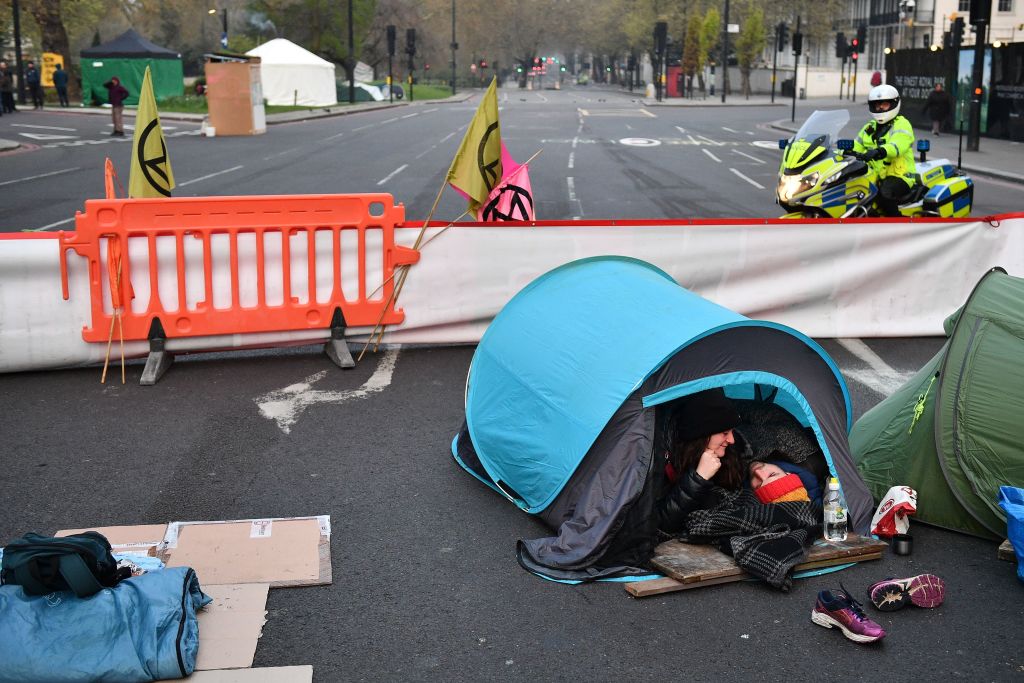 Activists lay in their tents in the road near Marble Arch on the second day of an environmental protest by the Extinction Rebellion group, in London on April 16, 2019. –  DANIEL LEAL-OLIVAS/AFP/Getty Images