Immigration has possibly caused more fractious discord at the heart of the European Union than any other topic apart from Brexit, and it is a preoccupation shared by the citizens of Europe who say it is the most important issue facing the EU in 2019.

The European Commission’s Eurobarometer survey, a twice-annually inquiry into the opinions of over 27,000 Europeans asked people in 33 countries what their main concerns were for the European Union, and found worries over immigration to be the clear winner. Some 34 per cent of Europeans said immigration was one of their top concerns in 2019, putting the issue comfortably ahead of the competition for another year.

Immigration has been the top concern of the European people in every Eurobarometer but one for the past nine surveys and after a decline following a peak during the 2015 migrant crisis has remained reasonably stable since, experiencing its first major fall this year since 2016. More volatile has been worry about terrorism, which has peaked and troughed along with the intensity of radical Islamic terror attacks against European cities, rising to a first-place 44 per cent concern in 2017 to a joint third place 18 per cent two years later.

High levels of concern about immigration, generally perceived to be an issue cared about by the political right, beating the generally left-linked issue of climate change comes despite the significant and ongoing preoccupation with the environment demonstrated by the mainstream media. 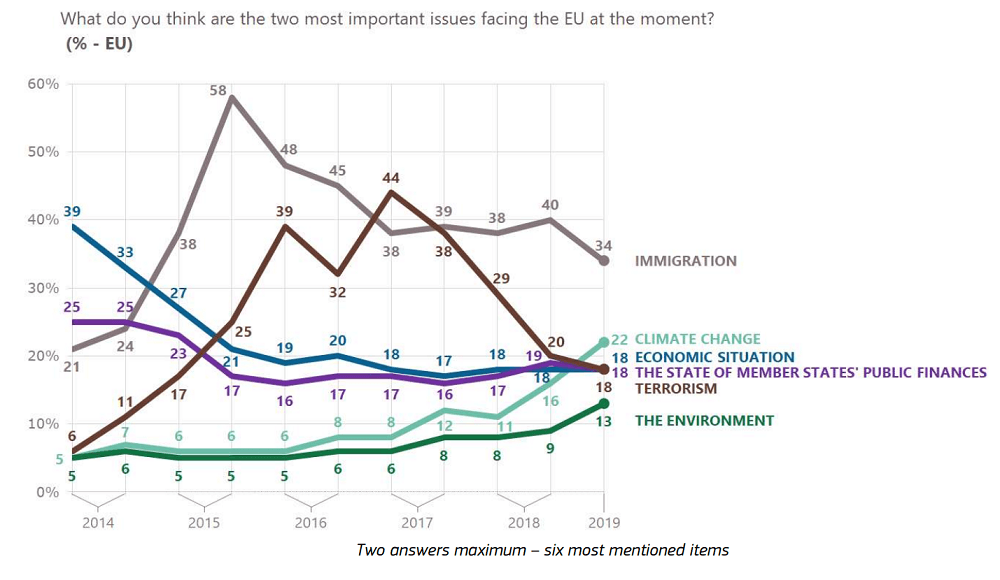 The United Kingdom was one of the few European nations which bucked the trend about concern over immigration, where the issue came a close second to worries about the economic situation of the European Union, and with climate change in third place.

While immigration was the primary concern in most other EU nations, there were a few other standouts — worry about climate change was first on the minds of respondents in Sweden Ireland, while Romanians were most worried about terrorism.

The survey also asked what matters particularly impacted the respondent’s nation, rather than Europe as a whole, presenting a whole different balance of concern. Unemployment has taken a tumble since the economic crises earlier this decade, falling from 48 per cent for national-level concerns in 2014 to a joint-first 21 per cent in 2019.

The United Kingdom bucked the trend of general European feeling in national matters also, showing that Britons were the most worries about crime of any nation in Europe, and more likely to be worried about housing provision than average. The British identified healthcare and social security as the number one domestic issue in 2019.