A 99-year-old former U.S. Air Force pilot who delivered chocolate for children behind the Iron Curtain has been honored for his service by the Royal British Legion.

Colonel Gail Halvorsen – nicknamed the Candy Bomber – released the treats, tied to miniature parachutes made from handkerchiefs, as he flew in vital supplies to West Berlin after it was blockaded by the Soviet Union in 1948.

Halvorsen, from Utah, was just one hundreds of air crew who flew in supplies to West Berlin’s 2.5 million population amid emerging tensions in Germany’s ruined and divided capital.

As well as foodstuffs, they also delivered hope.

His work was featured during the Royal British Legion’s Festival of Remembrance at the Royal Albert Hall on Saturday night.

A young actress read a testimonial from Traute Grier, a teenager when the blockade began, who said: “The chocolate was wonderful but it wasn’t the chocolate that was most important.

“What it meant was that someone cared. That parachute was something more important than candy. It represented hope.”

For his part, Col. Halvorsen has told how the chocolate drops began with two sticks of Wrigley’s chewing gum, following a group of children’s heartfelt plea for liberty from Communist oppression.

The pilot, then a 28-year-old lieutenant, met the children through the fence of an airfield where he was working.

“The kids said, ‘someday we’ll have enough to eat but if we lose our freedom, we’ll never get it back’. I thought their attitude was wonderful so I reached in my pocket. All I had was two sticks of gum.

Operating almost non-stop and through the harsh German winter, the Berlin Airlift carried more than two million tonnes of supplies on more than 277,000 flights, mainly into Tempelhof.

U.S. Air Force C-47 Skytrains and C-54 Skymasters took milk, flour and medicine to the needy. At the height of the Berlin Airlift, aircraft were landing every three minutes, supplying up to 13,000 tons of food, coal and medicine a day, according to the U.S. Air Force Historical Support Division.

At least 78 US, British and German pilots and ground crew lost their lives in accidents in the air and on the ground, as the Allies strove to prevent Berlin’s population from starving.

It was the first major salvo of what became known universally as the Cold War. 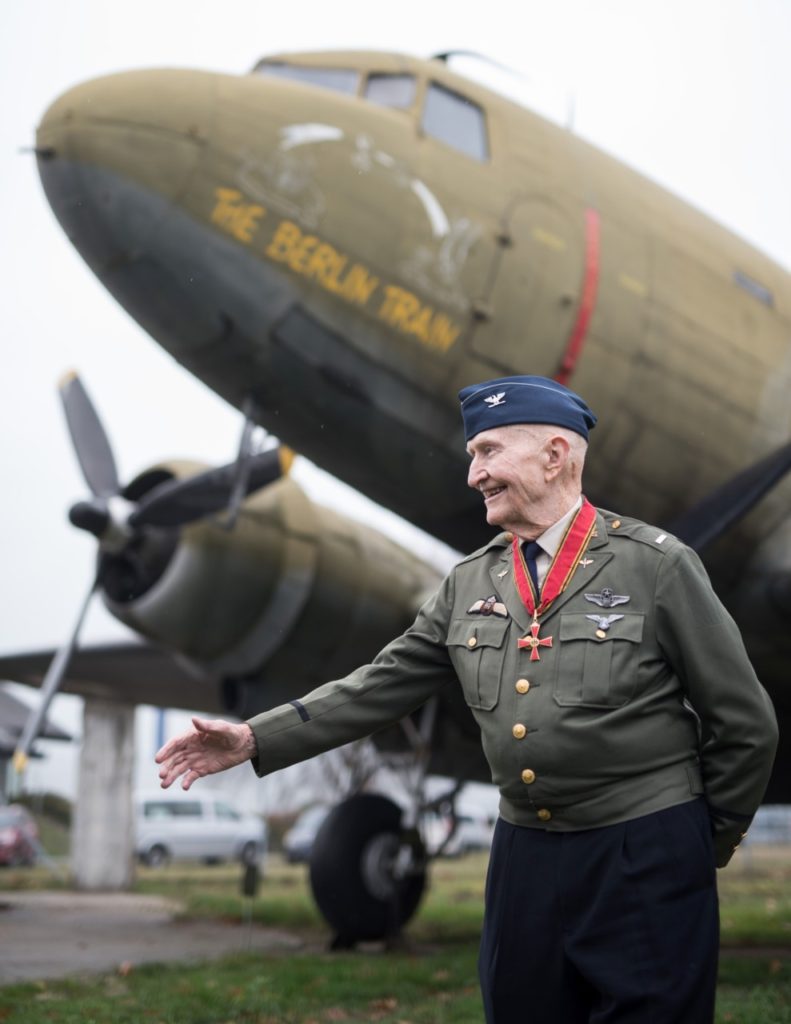 Veteran of the US Air Force and so-called “candy bombers” pilot Gail Halvorsen poses in front of a military transport aircraft at the airport in Frankfurt am Main, central Germany (BORIS ROESSLER/AFP/Getty Images).

When he wasn’t aloft, Halvorsen was filming aircraft landings with his Revere movie camera when he encountered about 30 German children between the ages of 8 and 14, he said in his autobiography, The Berlin Candy Bomber.

Their friendships would last through the decades since, as Breitbart News reported.

Halvorsen insists the real heroes of the Berlin Airlift were those people inside the city.

“The heroes of the Berlin Airlift were not the pilots, the heroes were the Germans — the parents and children on the ground,” he told AFP.

“They were the stalwarts of the confrontation with the Soviet Union, not the guys bringing in the food, it was the people (of West Berlin) standing up for themselves.”

Ultimately the Berlin Airlift proved to Halvorsen the fight for freedom does not stop when the guns go silent.

“Freedom is important and sometimes you have to fight for it. That’s why we came on the Berlin Airlift, to help people make their own decisions.”