Brexit leader Nigel Farage decried a group of hard-left activists who shouted abuse at members of the public arriving at a Brexit Party rally in Plymouth, Devon Monday as being at odds with the principles of free speech, liberty, and democracy.

Mr Farage was appearing alongside other Brexit Party activists and candidates at a national campaign event in a hotel in Plymouth, Devon Monday evening which was picketed by a group of protesters carrying signs and flags professing allegiance to causes including cancelling the outcome of the first Brexit referendum, opening the nation’s borders yet further, and the hard-left Antifa group.

Attendees of the Brexit party rally were heckled, and while speeches were ongoing in the ballroom of the hotel eggs were thrown at the windows of the building by the group. A member of the hotel’s security staff told Breitbart London that the police had been called over the situation. 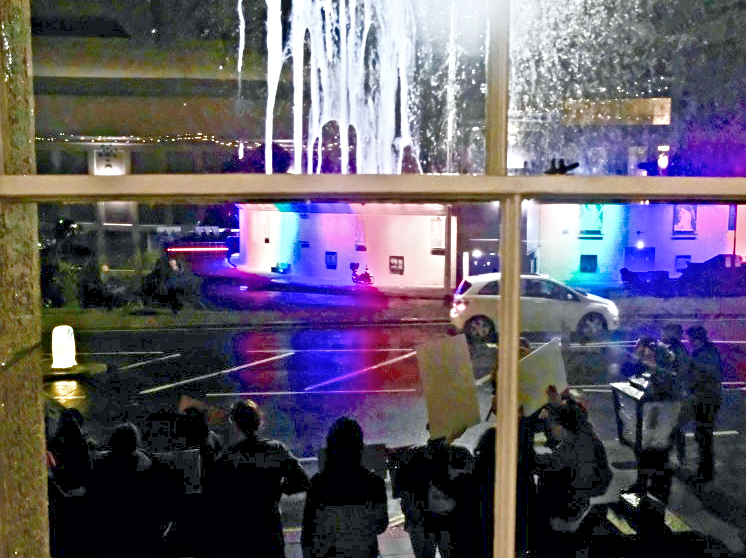 Taking to the stage to address the rally, Brexit leader Nigel Farage kicked off his speech by addressing the group outside, casting the attempts to intimidate pro-Brexit voters as being anti-democratic. Mr Farage said: “I don’t think, having known this city for nearly 40 years, that the 25 yobs that are standing outside the front door, are representative of this city in any way at all.

“The very idea that they should abuse people like you, walking through the front door [and] taking part in the democratic process, I would suggest is not what we commemorated two Sundays back when in our millions in this country we attended church services, town centres, war memorials. To remember the massive contribution those generations that went before us made, so we could live in a free speech, liberty, democracy.”

Mr Farage had enjoyed a warmer welcome elsewhere in Plymouth earlier in the day, when he was treated to a tour of local fishing boats in the harbour before repairing to a historic water-front pub. The response by the regular drinkers in the establishment was also referred to by Mr Farage in his speech, when he told the audience: “If you want a good pint in Plymouth, get down the Dolphin!

Nigel Farage downs his pint and walks out of a Plymouth waterfront pub. Two dozen locals break into a spontaneous rendition of 'Rule Britannia'. Remarkable scenes.

“It’s quite well known I rather enjoy the odd sherbert here and there. But I have to tell you the people in the Dolphin were proper, honest, decent, hard-working British people who three and a half years ago voted for us to become a free and independent country. And they are pretty hacked off that it has not happened. I went down, I had a drink with them, I had a great time with them, and as I left they were singing ‘Rule Britannia’. Get down the Dolphin!”

Mr Farage and the Brexit Party have been the focus of an increasingly targeted campaign of physical political intimidation by the hard left in Britain, with the throwing of foodstuffs — predominantly milkshakes — having gained currency as a favoured form of attack over 2019. A Brexit Party campaign stall was ‘milkshaked‘ in November, continuing a trend started during the European Parliament elections earlier in the year when Mr Farage himself was hit with a milkshake while on a campaign walkabout.

The thrower was later convicted of common assault but spared jail, a fate that was contrasted at the time to an assault with an egg on Labour leader Jeremy Corbyn which saw the perpetrator sentenced to 28 days in jail.