The German auto giant, Volkswagen, has come under fire for its business operations in Xinjiang, China, a region which is home to the largest internment of minorities in ‘concentration camps’ since the Second World War.

Volkswagen, which has a factory in Xinjiang’s capital city, Urumqi, defended its presence in the region by saying that the decision was “based purely on economics” expecting “further economic growth in the region over the coming years.”

A report from the German newspaper Süddeutsche Zeitung contradicts Volkswagen’s economic claims, saying that VW’s factory in Xinjiang is actually operating at a loss so that the carmaker can curry favour with the Chinese Communist Pary in order to secure future contracts.

The same report said that the factory has close ties with the Chinese People’s Armed Police, a paramilitary group believed to be heavily involved in the internment camps.`

On the working conditions inside the Xinjiang factory, Volkswagen told DW: “We do not assume any of our employees are forced labourers.”

The revelations have drawn comparisons to Volkswagen’s past.  The auto company used concentration camp victims and prisoners of war for slave labour in its factories during the Nazi Germany era.

German Chancellor Angela Merkel’s top spokesman, Steffen Seibert, said on Monday that “in a situation in which there are no sanctions in place …  it is solely a decision of any given company” to continue operating in Xinjiang. 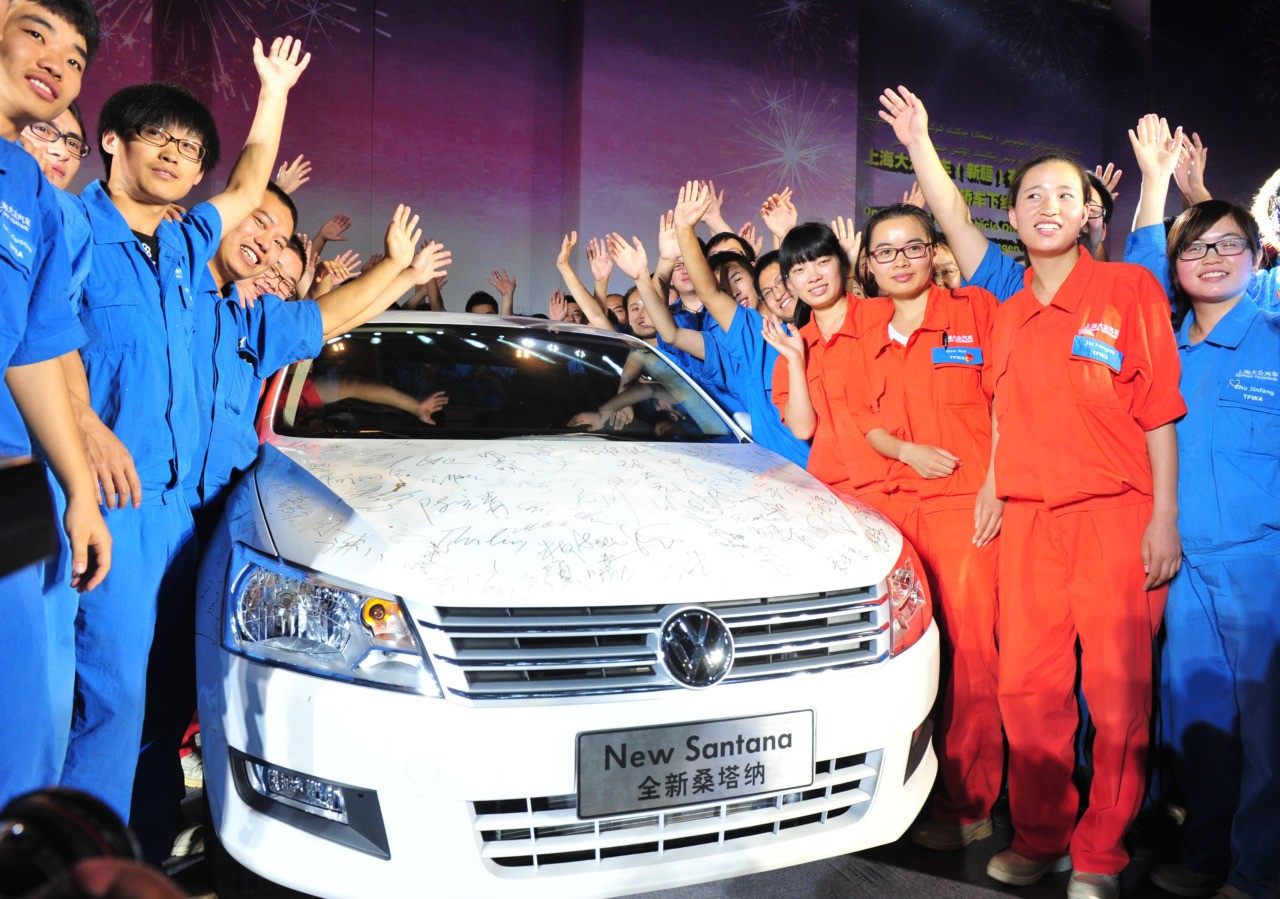 Employees pose with the first New Santana sedan after rolling off the production line of Shanghai Volkswagen on August 29, 2013, in Urumqi, Xinjiang, China. (VCG/VCG via Getty Images)

This week a series of documents were leaked to the International Consortium of Investigative Journalists (ICIJ) detailing the scope of the internment camps in Xinjiang, believed to be currently interning between 1 and 3 million prisoners from ethnic minority groups in China, mostly Muslim Uyghurs and other ethnic minorities common in the region, like Kazakhs and Kyrgyz people.

The documents describe an Orwellian surveillance system installed by the Chinese Communist Party that uses “predictive policing,” locking up those suspected before any crime has been committed. Behaviours deemed to be “suspicious” include travelling, praying, or using apps not monitored by Beijing censors.

The leaked documents also back up claims by survivors of the camps, who have reported that prisoners are subjected to torture, rape, forced sterilisation, and organ harvesting.

One woman said that “young girls are taken out and raped all night long. If you keep resisting, they will inject you with something and kill you.”

“The authorities put a helmet-like thing on my head, and each time I was electrocuted, my whole body would shake violently and I would feel the pain in my veins”, said another survivor.

A Kazakh kindergarten administrator, Sayragul Sauytbay, was abducted in 2017, brought to a camp and forced to become a Mandarin language instructor.

She told the AP that it was a “concentration camp, much more horrifying than prison,” reporting torture, rape, and brainwashing inside the camp. Sauytbay said that the prisoners were force-fed medication that makes them listless and obedient, and that “in every corner in every place there were armed police.”

The document leak has ramped up pressure on Germany, which did hundreds of billions in trade with China last year, making it one of Germany’s top trading partners.

There are some 5,200 German companies with approximately 1 million employees operating in the communist state.

“Berlin is trying hard to safeguard and build on the partnership that has developed over the last decades, especially economically, which has been very beneficial for both sides,” Bernhard Bartsch, a senior China expert at Germany’s Bertelsmann Foundation told DW.

But added that “Berlin needs to wake up” and should “do what it can to reduce dependencies”.

On Tuesday, German Foreign Minister Heiko Maas said that “China must meet its international obligations on human rights,” calling for independent inspections of the camps by the U.N. High Commissioner for Human Rights.

The government of the United Kingdom echoed the call for China to allow U.N. inspections.

“We have serious concerns about the human rights situation in Xinjiang and the Chinese government’s escalating crackdown, in particular, the extra-judicial detention of over a million Uighur Muslims and other ethnic minorities,” a Foreign Office spokesperson said.

“The UK continues to call on China to allow UN observers immediate and unfettered access to the region.”

The calls for inspections were rebuffed by Liu Xiaoming, the Chinese ambassador in the UK, who said:

In total disregard of the facts, some people in the West have been fiercely slandering and smearing China over Xinjiang in an attempt to create an excuse to interfere in China’s internal affairs, disrupt China’s counter-terrorism efforts in Xinjiang and thwart China’s steady development.