The election meme war has intensified with Prime Minister Boris Johnson ploughing through a polystyrene brick wall representing Brexit “gridlock” in a digger wrapped in the Union flag.

The digger, whose bucket read “Get Brexit Done”, belongs to Conservative Party donor Lord Anthony Bamford. The prime minister visited JC Bamford’s factory, which exports high-tech digger and construction equipment around the globe, for a speech in Staffordshire on Tuesday.

Mr Johnson used the stunt to criticise Labour and other Remain-backing MPs for the continual gridlock since the June 2016 referendum.

Two days until #GE2019, Boris Johnson has driven a JCB through a polystyrene wall during a campaign visit to a manufacturing plant near Uttoxeter.

The wall had the word “Gridlock” written on it before being demolished by the digger attached with a “Get Brexit Done” sign. pic.twitter.com/9TzqeI5SI9

Calling a potential Jeremy Corbyn government “disastrous”, Prime Minister Johnson told JCB workers and supporters on the factory floor: “We’d spend a whole year in dither, drift, confusion, not just on another referendum on Scotland… we’d have another referendum on the EU. Toxic. Divisive. Pointless.”

Johnson hopes to gain a majority in parliament that will pass his EU-approved exit treaty by January 31st, after which he said the UK “will see economic benefits immediately because the confidence will return to this country and we’ll start to get our mojo back”. 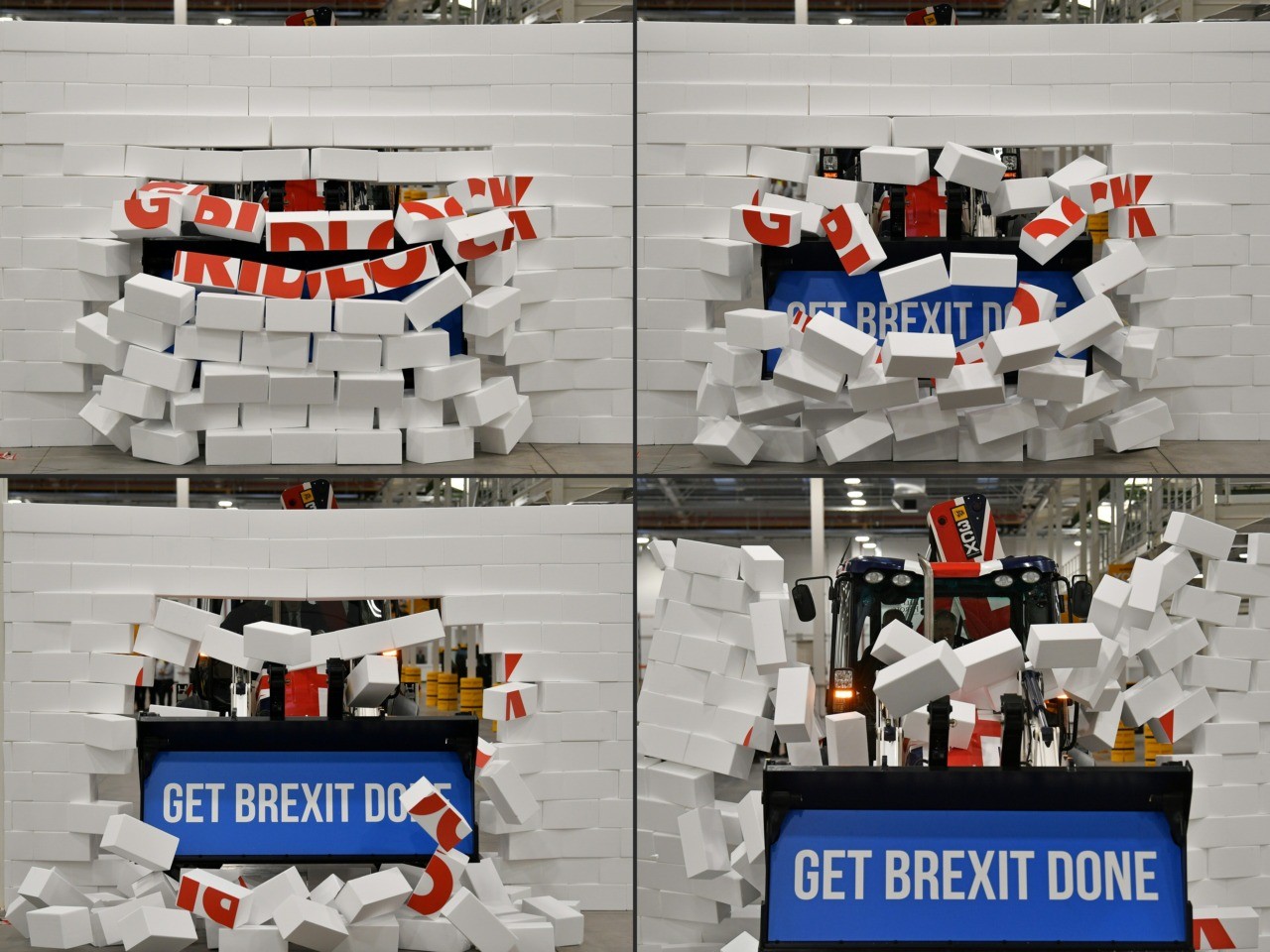 (COMBO) This combination of pictures created and taken on December 10, 2019 shows Britain’s Prime Minister and Conservative party leader Boris Johnson as he drives a Union flag-themed JCB, with the words “Get Brexit Done” inside the digger bucket, through a fake wall emblazoned with the word “GRIDLOCK”, during a general election campaign event at JCB construction company in Uttoxeter, Staffordshire. (Photo by BEN STANSALL/POOL/AFP via Getty Images)

Gesturing to the demolished wall, he said: “We have 48 hours to get rid of the roadblock in this country and you’ve seen how we can do it literally and figuratively.

“We can end the gridlock that is holding this country back, we can move forward together, and I hope we can collectively remove the wall.”

Channelling former President Ronald Reagan’s 1987 challenge to the USSR’s Mikhail Gorbachev, Johnson added: “As one Conservative said to another Communist: ‘Mr Corbyn, it’s time to tear down that wall and remove your opposition to getting Brexit done.’ We can get Brexit done, we can move this country forward.” 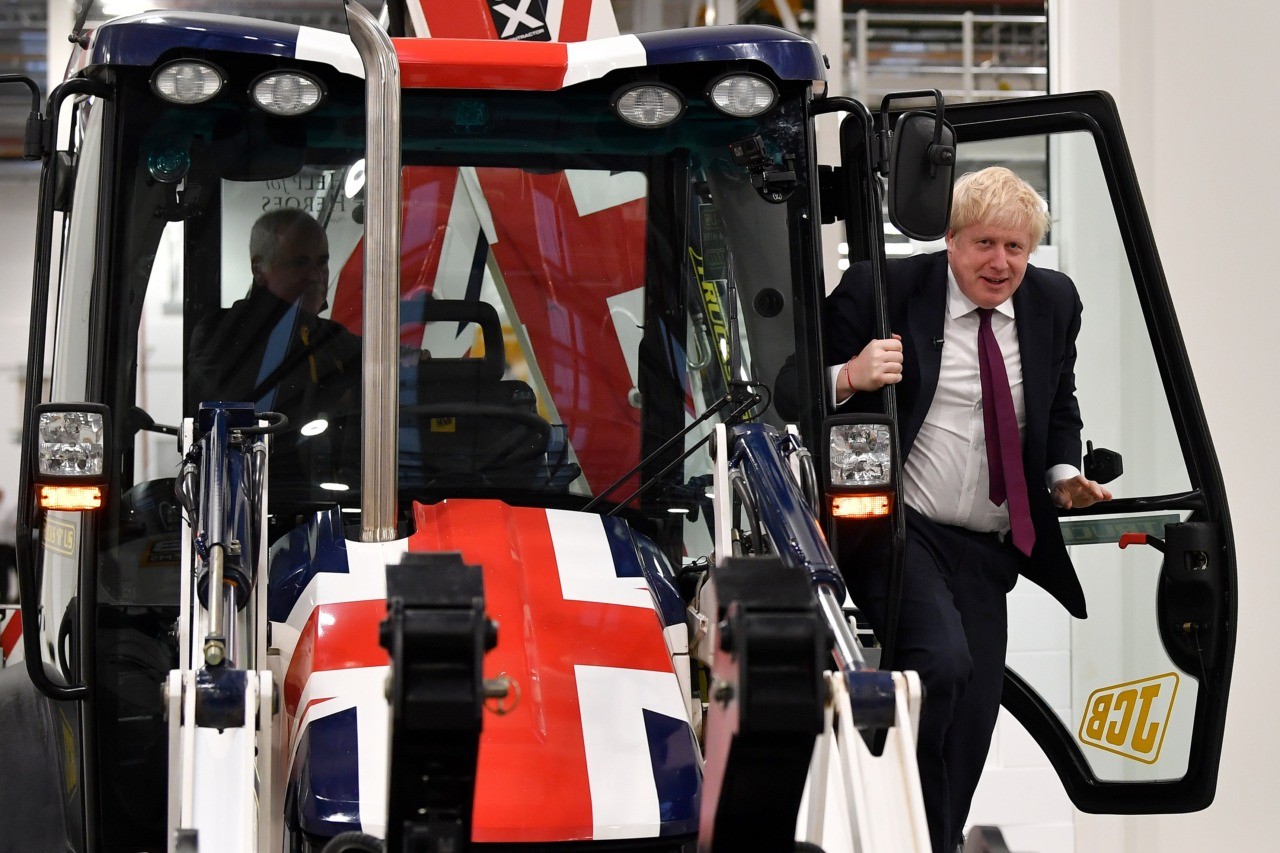 Britain’s Prime Minister and Conservative party leader Boris Johnson exits the cab of a Union flag-themed JCB, after driving through a fake wall emblazoned with the word “GRIDLOCK”, during a general election campaign event at JCB construction company in Uttoxeter, Staffordshire, on December 10, 2019. – Britain will go to the polls on December 12, 2019 to vote in a pre-Christmas general election. (Photo by Ben STANSALL / POOL / AFP) (Photo by BEN STANSALL/POOL/AFP via Getty Images)

On Monday, the Conservative Party’s media machine released a spoof of the film Love Actually, trolling anti-Brexit activist and Hollywood actor Hugh Grant. Grant later opined that Russian “rubles” may have paid for the skit.

In November, the Tories released an ironically youth-orientated hour of Lo-Fi beats “to get Brexit done to”, showing a looping video of Boris reading on the train.

Labour’s Jeremy Corbyn, in the meanwhile, has also tried to get on board with the viral video game, releasing a one minute short of himself deriving mirth from reading out mean tweets about himself while sitting next to a crackling fireplace.