Prime Minister Boris Johnson has delivered a Christmas message conveying hope for the year ahead and asked Britons to remember persecuted Christians worldwide who will have to celebrate in secret, saying “that is something I want to change”.

With a piano playing the Christian carol “Oh, come, all ye faithful!” in the background, Prime Minister Johnson said in a recorded message shared on social media:  “It’s that special time of year when, whatever has gone before, we take an opportunity to celebrate all that is good in the world and spend time with our friends and family.

“Christmas day is, first and foremost, a celebration of the birth of Jesus Christ. It is a day of inestimable importance to billions of Christians the world over.”

Speaking of Christians who face persecution, he said: “Today of all days I want us to remember those Christians around the world who are facing persecution. For them, Christmas day will be marked in private, in secret, perhaps even in a prison cell. As prime minister, that is something that I want to change. We stand with Christians everywhere, in solitary, and will defend your right to practice your faith.”

Whoever you are, wherever you are, and however you’re celebrating, have a very happy Christmas, and I’ll see you all again in the New Year. pic.twitter.com/h6xcxSUszv

The prime minister thanked the NHS staff, police, and public servants “working tirelessly this Christmas”, and gave a special mention to the community of military personnel.

Mr Johnson, who earlier this week travelled to Estonia to serve Christmas dinner to soldiers stationed at the Tapa military base, said: “I also want to express my personal gratitude to the wonderful members of our armed forces currently on deployment and therefore to their friends, family, and children back home who have an empty chair at the table when they tuck into their Christmas dinner.”

He concluded: “So as a country, let us reflect on the year and celebrate the good that is to come. Folks, I hope you enjoy the next few days. Try not to have too many arguments with the inlaws or anyone else and whoever you are, wherever you are, and however you’re celebrating, have a very Happy Christmas and I’ll see you all again in the new year.” 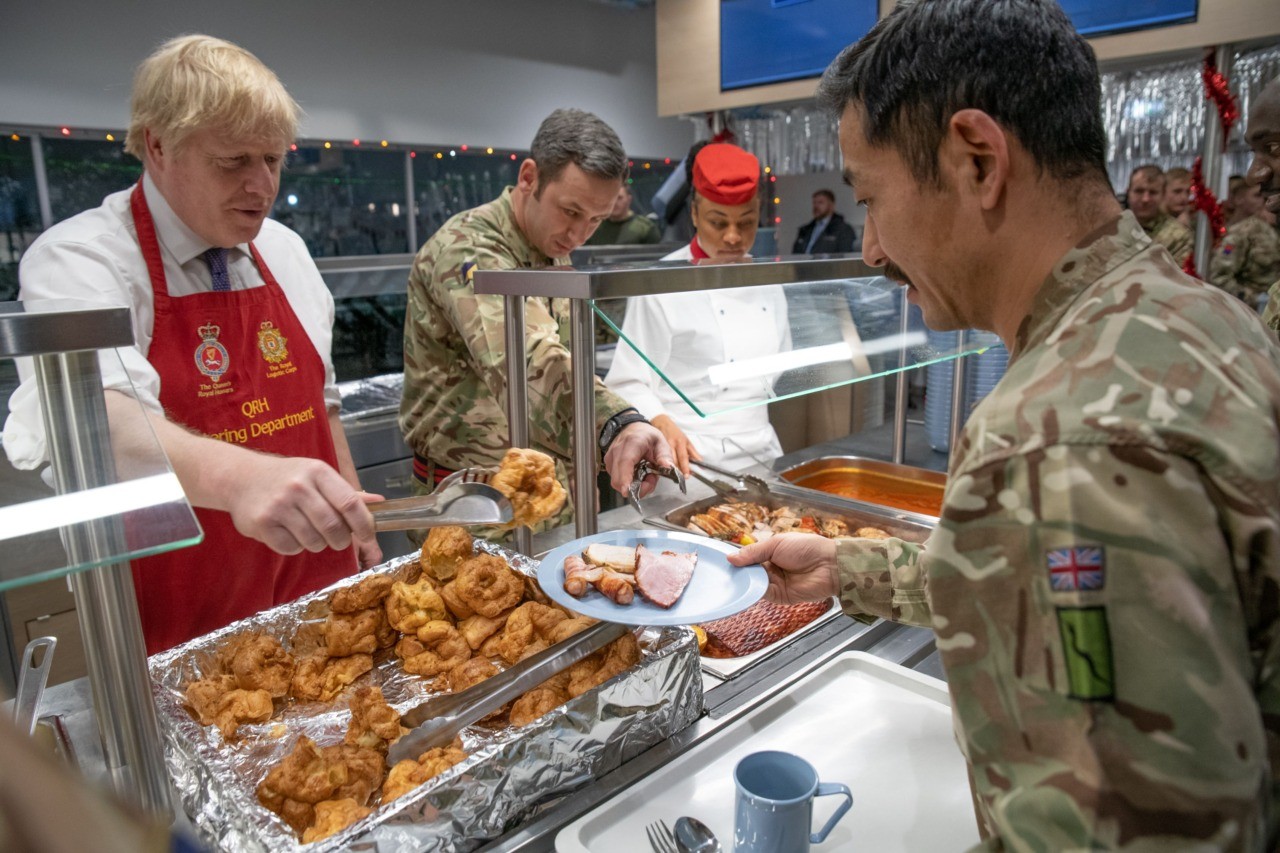 Britain’s Prime Minister Boris Johnson serves Christmas lunch to British troops stationed in Estonia at the Tapa military base on December 21, 2019, during a one-day visit to the Baltic country. Tapa military base is home to 850 British troops from the Queen’s Royal Hussars who lead the Nato battle group along with personnel from Estonia, France and Denmark. (Photo by RAIGO PAJULA/AFP via Getty Images)

–Corbyn ruminates on election loss, “injustice and inequality” at Christmas–

By contrast, outgoing Labour leader Jeremy Corbyn struck a far more downbeat note. While the socialist name-dropped Jesus Christ early on his message, within the first 20 seconds of his two-and-a-half-minute video, he reflected on his disappointment at having driven his party to its worst election defeat since 1935.

“This has been a difficult year for many of us. We didn’t succeed in delivering the change that so many people so desperately need. But Christmas is a chance to listen, reflect, and remember all the things that bind us together: our compassion, our determination to tackle injustice, and our hope for a better world.”

Whereas Johnson sought to encourage Britons to feel good and look forward to a positive new year, Corbyn drew attention to “the scale of injustice and inequality” which he said is “in very plain sight” at Christmas.

While Corbyn praised those who worked in food banks and emergency shelters helping vulnerable people at this time of year, he painted a picture of materialist Britons rushing home “often loaded with shopping bags”, “seeing those who have no homes with no hope beside them”, and continued that “adverts with mouth-watering Christmas meals” should remind us that “we know that many children are hungry”.

At Christmas the scale of injustice and inequality is in plain sight, but so is the generosity and solidarity of our communities. pic.twitter.com/L9mVuMW1VR

Boris Johnson won the biggest Conservative majority since Margaret Thatcher was returned to power in 1987, in part after the prime minister had broken through the “Red Wall” — the northern working-class heartlands which the metropolitan elite in Labour had neglected.