Aircraft and trains are finding a new lease of life amid the coronavirus epidemic as European nations activate emergency healthcare capacity.

The surplus of wide-bodied jet airliners grounded due to a lack of demand for air travel during the coronavirus pandemic could be converted into intensive care units under a new plan being presented to the British government. The aircraft, which already have internal oxygen delivery systems — essential for ventilating patients suffering from respiratory virus coronavirus — are also designed to be easy to clean and can be hermetically sealed, exactly as they are while in flight.

Converting the aircraft would take just days and would see aircraft sitting on the tarmac hooked up to ground power and external oxygen tanks, according to a report by London’s Times newspaper, citing the proposal by a group of medics and industry insiders to rapidly boost the intensive care capacity of the country. Among the advantages cited are the excellent transport links of airports for moving patients, the presence of extensive support and catering facilities in the terminals, and adjacent hotels for housing medical staff. 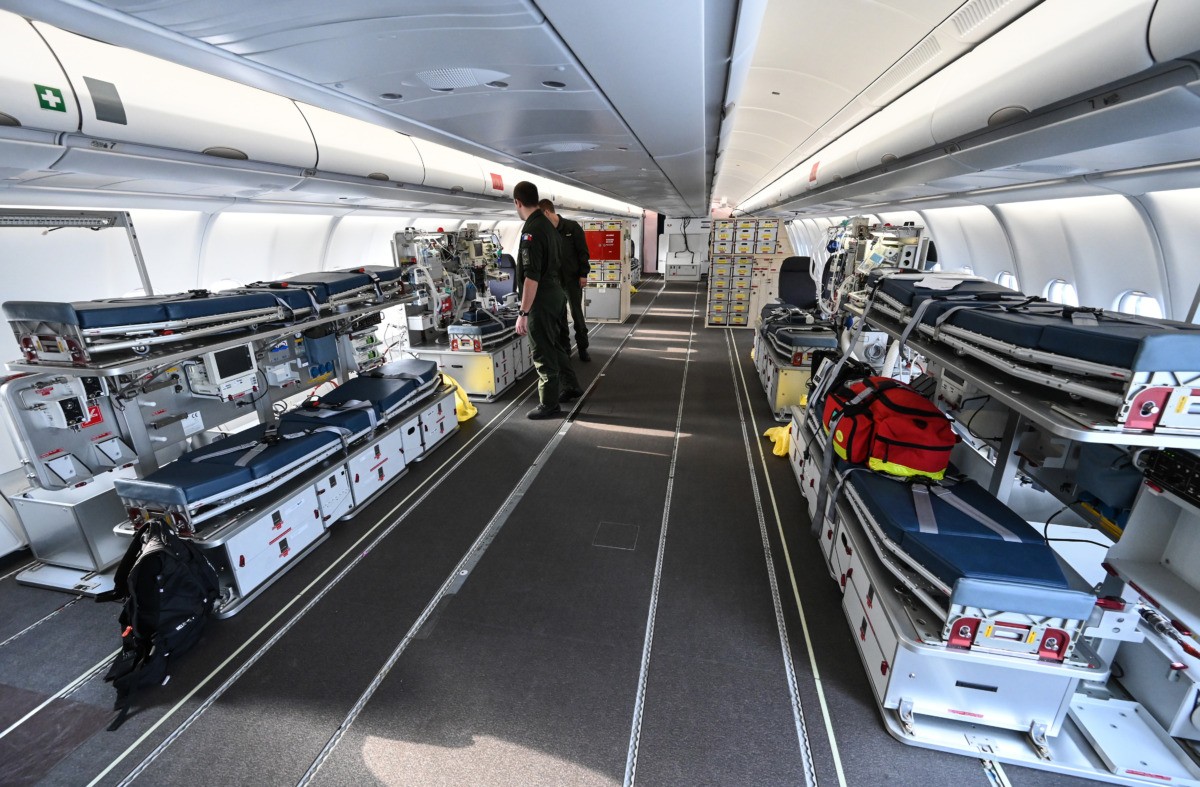 Medical personnel in a medicalised Airbus A330 of the French army check the equipment before taking off on March 31, 2020, from the Istres military base in southeastern France, for Mulhouse in eastern France to evacuate patients infected with the COVID-19 (novel coronavirus) to a hospital facility in Hambourg, Germany. France has been on lockdown since March 17 in a bid to limit the contagion caused by the novel coronavirus, a situation it has extended until at least April 15. (Photo by PASCAL GUYOT/AFP via Getty Images)

Once outfitted, the aircraft could also be flown to other regions or countries as the virus spreads around the world at different speeds and intensities, only needing a supply of liquid oxygen and electricity upon landing to operate. Professor Jonathan Sackier, one of the leaders behind the project, said: “Lesser developed countries have scant ICU capabilities and remote areas are ill-served… Yet much of the world’s population has at least some aviation infrastructure.”

The Times states the plan has support from the UK’s Civil Aviation Authority and has already been offered suitable aircraft, but needs cooperation from Westminster to make any further progress.

The basic concept for these conversions was raised by Conservative Member of Parliament Marco Longhi three weeks ago in a conversation with his party colleagues. After screenshots of an internal Whatsapp group showing the suggestion — as well as using dormant cruise ships as floating hospitals as they were during the Falklands War in 1982 — was leaked to Westminster gossip blog Guido Fawkes, Longhi was mocked as being “a little air-brained”.

Medical aircraft have already been used by the French government to move coronavirus patients around the country, and to Germany, whose healthcare system has surplus capacity.

The east of France has been badly impacted by coronavirus, but the west of the country less so, meaning while eastern hospitals — including in Paris — are full to overflowing, there are empty beds in the west of the nation. To use that capacity more efficiently, the French government has also started using its nationwide network of high-speed trains — much less busy now millions of French residents are on lockdown — to move patients west.

The Associated Press reports some high-speed trains have been “fitted out like hospitals” for the transfers. They reported over the weekend: “The first ‘medicalised’ TGV made its inaugural trip on March 26. Doctors in protective gear pushed gurneys along the nearly empty platform of the train station in the eastern city of Strasbourg as safety warnings echoed from loudspeakers. Inside the double-decker cars, patients and webs of tubes and wires were squeezed past luggage racks and rows of seats. Once they were secured, the train sped off toward less impacted hospitals in the west.”

Photographs from Gare d’Austerlitz train station in Paris, where patients are loaded onto the special trains to go west, show carriages stripped of seats and filled with beds, and mask-wearing doctors and nurses to attend during the journey. 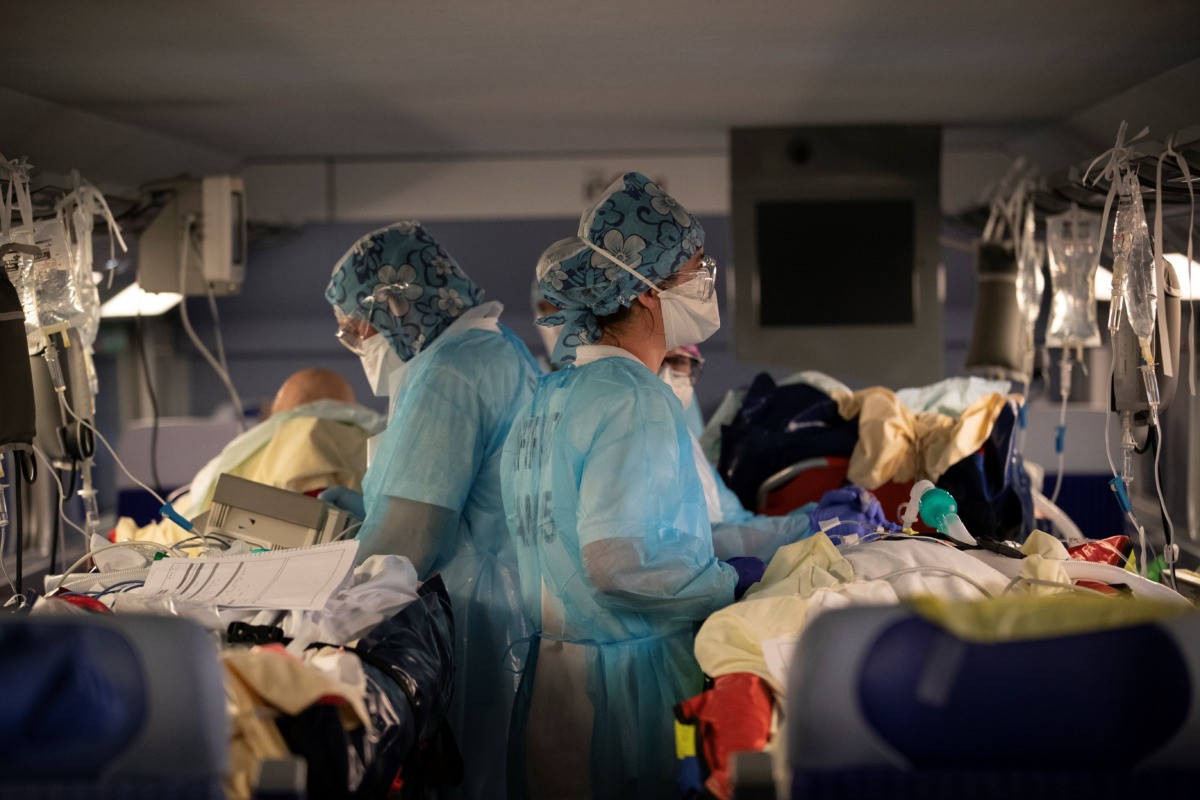 View inside a converted medical train at the Gare d’Austerlitz train station Wednesday, April 1, 2020, in Paris. France is evacuating 36 patients infected with the coronavirus from the Paris region onboard two medicalised high-speed TGV trains. The patients, all treated in intensive care units (ICU), are being transferred to several hospitals in Britany, as western France is less impacted by the epidemic. The new coronavirus causes mild or moderate symptoms for most people, but for some, especially older adults and people with existing health problems, it can cause more severe illness or death. (Thomas Samson, Pool via AP) 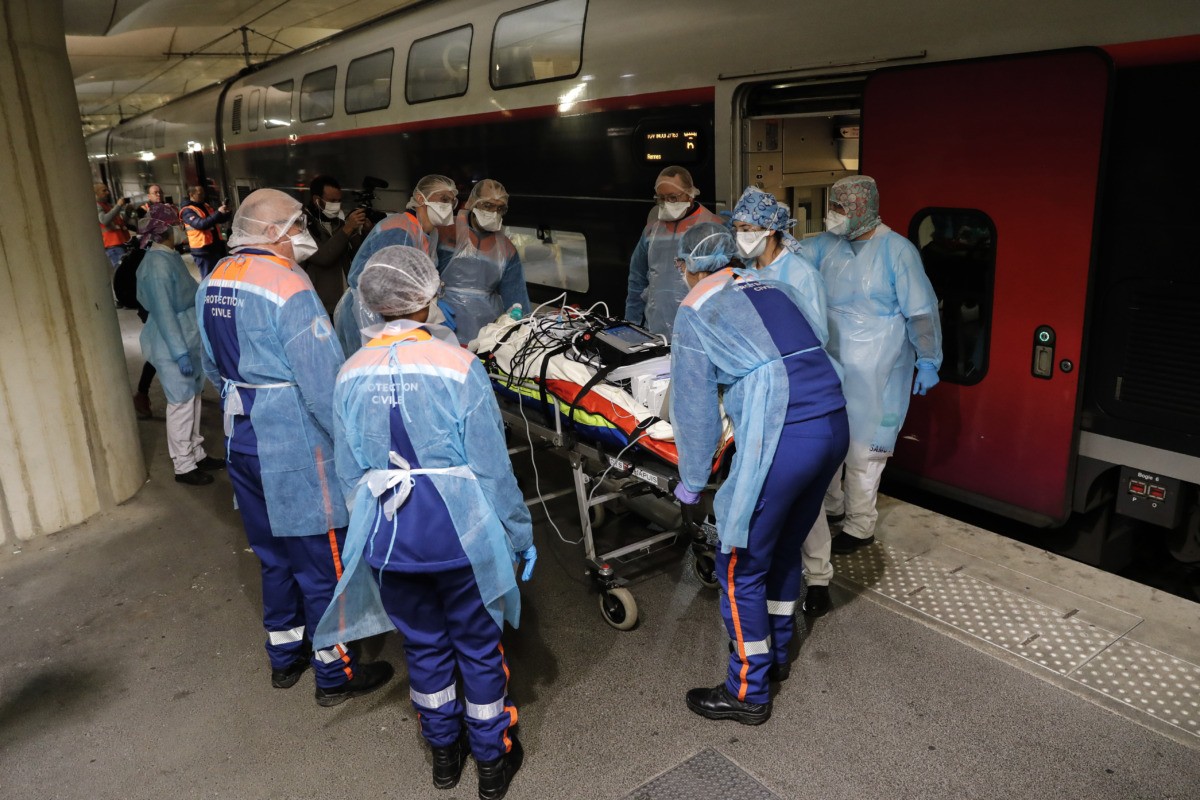 Medical staff embark a patient infected with the COVID-19 virus in a train at the Gare d’Austerlitz train station Wednesday, April 1, 2020, in Paris. (Thomas Samson, Pool via AP)