The French coast guard ship filmed by Brexit leader Nigel Farage escorting illegal migrants into British waters is a regular visitor, its own safety transponder data reveals, and can be proven to have made such missions at least twice in the past week.

The French coast guard “large patrol vessel” Fourmentin — ironically named after a famous 18th-century French pirate who made a living attacking the British — was filmed taking part in an illegal migrant handover mid-English Channel by Brexit veteran turned investigative reporter Nigel Farage on Wednesday. In the short film, taken from a fishing vessel close to where the hand-over took place, Mr Farage stated: “What we know is that a French naval vessel has been seen escorting boats out of French waters to get them into British waters… then they are off their hands.”

Publicly available data from the French ship’s Automatic Identification System (AIS) — a safety at sea system which helps track vessels to prevent accidents using ship-based transponders and shore-based receiving stations — not only confirms the Fourmentin met with a British coast guard craft while escorting migrants on the occasion Mr Farage described, but that it has previous form. 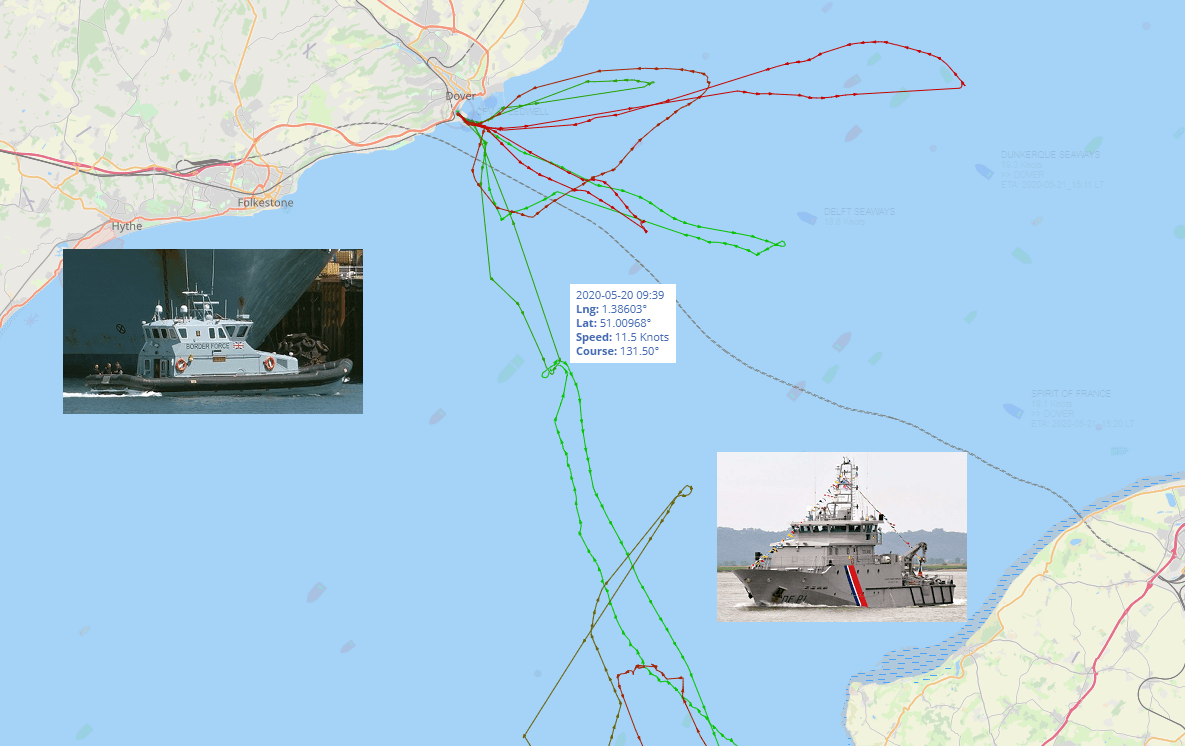 Map composite showing the Fourmentin meeting the Speedwell in the mid-channel on May 20th 2020 / image generated by Breitbart London with data from myshiptracking.com and open-source imagery.

Data from the 20th of May shows the Fourmentin arriving on the English side of the Channel traffic separation scheme at 0915, before executing a figure of eight manoeuvre and leaving the area 30 minutes later at 0945.

Meanwhile, British government Coastguard cutter Speedwell also arrived at the same location. The AIS data of the Speedwell shows it coming practically alongside the Fourmentin and then leaving the area at 0937.

Having rushed to the area at a comparatively high speed of 24 knots (28 miles an hour over land), the Speedwell then proceeded back to her home port of Dover at a more leisurely speed of between seven and ten knots, while escorting a rubber boat full of illegals.

A Coastguard statement later that day claimed the mission to retrieve the illegals was part of its mission of “safeguarding life around the seas and coastal areas of this country.”

“HM Coastguard is only concerned with preservation of life, rescuing those in trouble and bringing them safely back to shore,” they claimed.

Considering the migrant boat was closely escorted by a large and capable French coast guard ship for its passage across the English Channel until inside British waters, at which point it was handed over to the care of a British ship, the question of whether lives were at any point truly in peril — given the ship was under the watchful eye of a coastguard vessel from a first-world nation already — may asked.

Furthermore, why the French coast guard did not “rescue” the migrants from making the crossing and return them to France before they had already travelled 20 nautical miles into British territorial waters is also unclear.

This mission by the Fourmentin follows another, perhaps even more extraordinary, by the same ship on Saturday the 16th. The same AIS dataset shows the ship again sailing from the French side of the Channel search and rescue zone to the British side — but not meeting a British government ship there. Instead, the French government vessel continued to closely shadow the migrant boat until it was just four and a half miles off the British coast, at Pett Level. 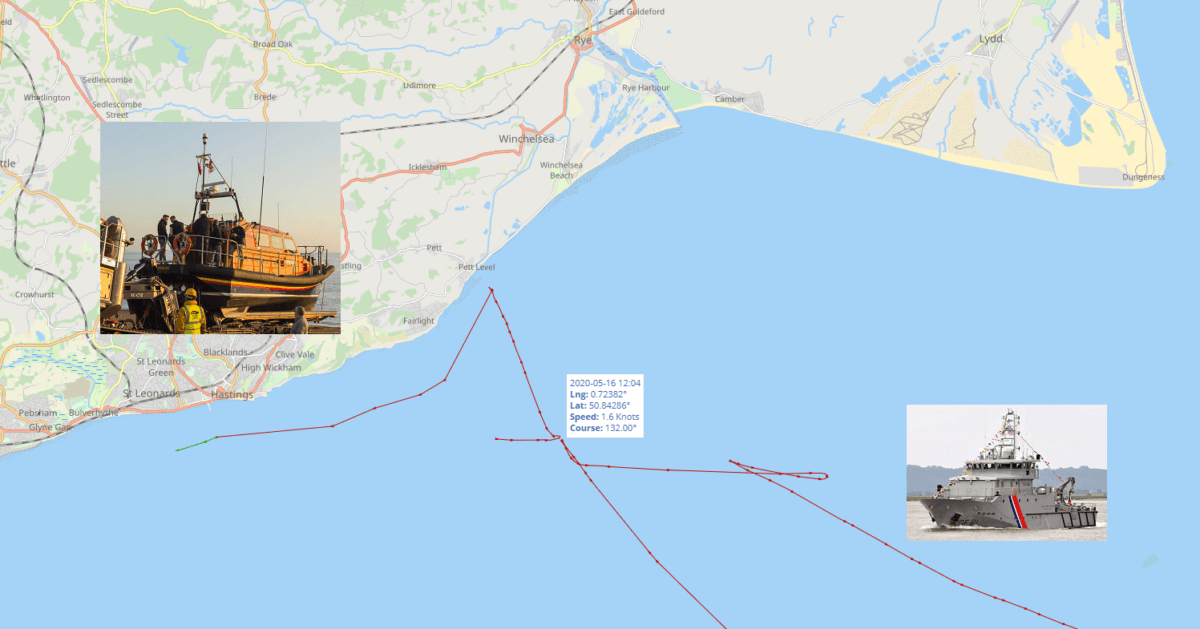 The Fourmentin comes to within four and a half miles of the British coast and meets with an RNLI all-weather rescue boat on Saturday 16th May 2020 / image generated by Breitbart London with data from myshiptracking.com and open-source imagery.

In this case the Fourmentin escorted the migrant ship well into Rye Bay where it conducted a rendevous with a British Royal Naval Lifeboat Institution (RNLI, a British charity which performs search and rescue nationwide) all-weather rescue boat, handing over the responsibility and turning to make its way back to France.

In this case, the migrants were placed under tow by the RNLI, but not brought ashore — the long, flat beach at Pett Level and the height of tide meant the craft was too large to get close to shore, so the mission to bring the illegals ashore was again handed over, this time to a small volunteer lifeboat.

Describing how UK Border Force vans and officers were ready on Pett Level to receive the illegals from France, and how they came to be involved, a lifeboat spokesman told Breitbart London: “The French frigate handed the migrants over to the RNLI, and as soon as that happened everything was set in motion.”

A task for the team this afternoon … the Pett Level Independent Rescue Boat team were tasked to support Coastguards,…

Posted by Pett Level Independent Rescue Boat on Saturday, May 16, 2020

The Fourmentin is far from the only ship undertaking this sort of mission in the English Channel. A British television news crew, alerted to the behaviour of the French state in the English Channel by the reportage of Mr Farage, witnessed another such handover on Thursday morning, this time by a small French warship — the Aramis.

“This French patrol vessel, the Aramis, had been shadowing this migrant boat pretty much from the moment it left the beach near Calais and for two hours until it crossed into UK territorial waters. It didn’t, from what we could see, make any efforts to intercept the migrant boat.”

The Aramis is technically a Gendarmarie craft after it was transferred from the French Navy in 2013, and she has since been partially rebuilt and wears police colours. To military force analysis groups like London’s International Institute of Strategic Studies, such a craft would be classified as being paramilitary in nature.

Despite its transferral to ostensibly civilian use, however, the Aramis has not had AIS transponder information publicly registered since 2019, strongly implying the beacon is normally turned off, in line with military protocols.

Operating a working AIS beacon is a requirement for almost all ships under the International Convention for the Safety of Life at Sea, however certain exemptions exist — including for military warships, but not generally for coast guard ships. Even warships generally turn their transponders on in busy shipping lanes — like the English Channel, the most congested in the world — as best practice, for the safety of all traffic at sea.

Because Aramis’s transponder is off — legally or not — it is difficult to assess whether the ship has taken part in other, so far undetected, migrant runs to the British shoreline.

Breitbart London has approached the French Embassy for comment on the behaviour of its military and paramilitary vessels, but no response was received by the time of publication.