Two brothers, Ilcic (19) and Ioan (24) Dumitru, have been jailed on modern sex slavery charges after they forced a Romanian woman to have sex with up to 15 men per day, even after she became pregnant.

The Dumitru brothers were sentenced at Woolwich Crown Court on Friday, after pleading guilty to the charges laid against them at the same court.

The court heard that the 20-year-old Romanian victim was tricked into travelling to the United Kingdom to work in a factory. However, when she arrived in the country last April, the brothers confiscated her passport and forced her into sexual slavery.

The victim said that she informed the brothers that she never worked as a prostitute before, to which she was told she “would learn”, according to the Metropolitan Police.

The elder brother, Ioan Dumitru, threatened her that if she failed to earn them money from sex work then he would “break her head”. 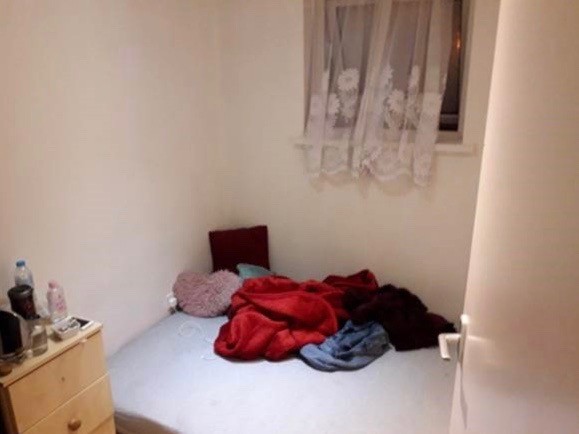 The bedroom where the victim was held, source: Metropolitan Police

The woman was frequently beaten and abused by the brothers. She was forced to sleep with 10 to 15 men per day, with all of her earnings going to her captors, totalling some £1,000 a day.

In one of her first encounters as a sex slave, the client’s condom broke, resulting in her becoming pregnant, but the brothers continued to exploit her.

When the victim was seven months pregnant, she believed that her baby had died as a result of a forced abortion attempt.

Eventually, she was able to get in touch with her family in Romania, who alerted local authorities. Two Romanian officers were brought to Britain to assist British police in apprehending the Dumitrus.

However, the headline figures for British prison sentences is often misleading, as the authorities and the press have a habit of adding up multiple terms to be served concurrently and not informing people that the convicts are almost always entitled to automatic release on licence halfway or more rarely two-thirds of the way through non-“life” sentences.

Breitbart London has contacted the Metropolitan Police for clarification.

UPDATE: The Metropolitan Police have clarified that Ilcic Dumitru’s sentence is comprised of two terms of 13 years and three months to be served concurrently, with a further term of two years to be served consecutively. He has to serve two-thirds of the first two terms and one half of the second term before release on licence.

Ioan Dumitru’s sentence is comprised of two 16-year terms to be served concurrently, of which he will have to serve two-thirds before release on licence.

Detective Inspector Grant Anderson of the Modern Slavery and Child Sexual Exploitation Unit (MSCE) said: “This was an awful crime which subjected a vulnerable young woman to a hideous way of life. We know she will never forget her time in captivity but I can report she gave birth to a healthy baby boy.”

“I hope she now has some closure after knowing these men will be behind bars for a long time,” DI Anderson continued, adding: “We are committed to bringing these offenders to justice and will continue to work with local and oversea partners to do this.”

The sentencing of the two men on modern slavery charges comes amidst increasing awareness of its scope and prevalence in the United Kingdom.

Earlier this month, an investigation found that British police allegedly overlooked instances of modern slavery in Leicester sweatshops — where the suspected victims and perpetrators are often of South Asian heritage — over concerns that cracking down on the practice would be seen as racist.

Raj Mann, the police contact for Leicester’s Sikh community, said: “The local authorities have known these sweatshops exist for decades but they’ve been loath to do anything about it for fear of being accused of picking on immigrant or refugee communities, as a lot of the exploited workers are of Indian background.”

“Within the Asian community, people generally turn a blind eye to workers in the community who are on less than the minimum wage. They see it as being better than earning nothing at all,” he added.

Delingpole: Slavery Is Still Rife in Britain. So Where Are the BLM Protests? https://t.co/wJCKu2H4Gv