A member of London mayor Sadiq Khan’s new commission reviewing statues, street names, and other memorials once interrupted a church service to scream at the Queen and threatened to “punch out” security.

British-Nigerian activist Toyin Agbetu was already working on the BLM-inspired Review, Rename, Reclaim naming review for the municipal authorities in the London borough of Hackney — represented by Labour’s Diane Abbott in Parliament — but was thrust into the spotlight by his appointment to Mayor Khan’s so-called Commission for Diversity in the Public Realm, which will be conducting a similar audit of statues and memorials for the entire capital.

An investigation into the background of the Commission’s members, described as “almost entirely… left-wing political activists, campaigners, and celebrities, instead of historians and experts” by Conservative parliamentarian Andrew Rosindell, soon revealed Agbetu as its most controversial appointee, with the activist having made headlines in 2007 when he interrupted a Westminster Abbey service commemorating 200 years since Britain’s abolition of slave trade to shout at the Queen.

“You should be ashamed!” he screams in video footage of the incident unearthed by the Guido Fawkes blog, as he is ushered away by security personnel and clergymen, jabbing his finger in the face of one guard — a black man — and threatening “I’ll punch you out!” 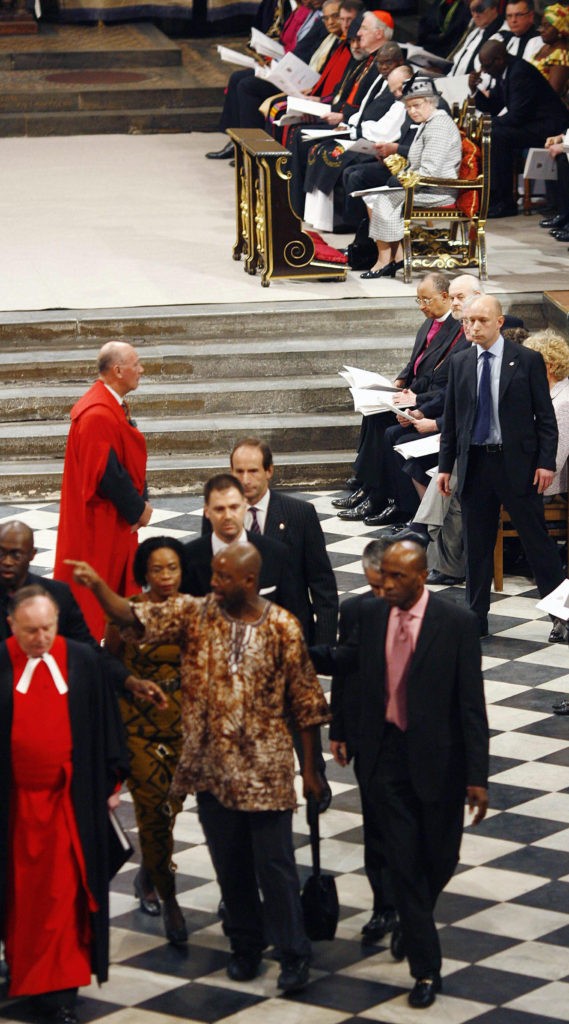 London, UNITED KINGDOM: Britain’s Queen Elizabeth II (top R) watches as a protestor, named by local media as Toyin Agbetu, is led out after interrupting proceedings to mark the bicentenary of the 1807 act to abolish the slave trade, attended by Britain’s Queen Elizabeth II and Prime Minister Tony Blair, at Westminster Abbey in central London 27 March 2007. Trade in black slaves was banned throughout the British empire by the 1807 law, imposing a fine of 100 pounds for any slave found on any British boat. Slavery was completely outlawed in British colonies in 1833. AFP PHOTO/ REUTERS/Stephen Hird/Pool (Photo credit should read STEPHEN HIRD/AFP via Getty Images)

A spokesman for Mayor Khan’s office has defended Agbetu’s appointment to the statues commission, however, saying that the teaching assistant was chosen “for his significant expertise, knowledge and experience as a social rights activist and in setting up Ligali, which challenges the misrepresentation of African people and culture in the media.”

“His vast experience will provide a valuable contribution to the commission,” they added.

As a recent example of this experience includes attending a protest against a statue of Sir Robert Geffrye, a former Lord Mayor of London and philanthropist born in the 1600s, and shouting “Geffrye must fall!” through a megaphone, some may question whether his “valuable contribution” to the question of what should be done with historic memorials is a foregone conclusion.