The majority of Britons back the implementation of domestic vaccine passports for work or socialising, with more than half saying that immunity certification does not infringe on personal freedoms, a poll suggests.

The Ipsos MORI poll published on Wednesday found that a majority of people, responding to a range of domestic scenarios, backed vaccine passports, including for visiting elderly relatives in care homes (78 per cent), going to a theatre or indoor concert (68 per cent), playing contact sports (58 per cent), and being able to visit a child’s soft play centre (52 per cent).

The much-discussed ‘passport for a pint’ also had the support of 62 per cent of respondents. Seventy-eight per cent backed vaccine passports for going overseas. 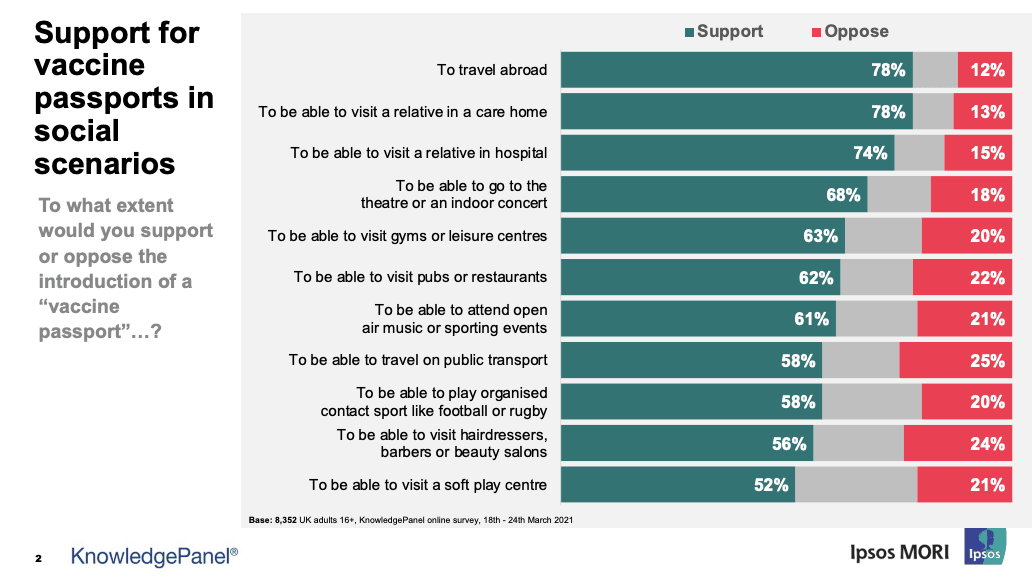 The pollsters also suggested support amongst the British people for vaccine passports for certain jobs, with between 57 per cent and 79 per cent backing them for various roles. Nearly eight-in-ten (79 per cent) backed them for healthcare staff, with majorities also in favour of them for teachers (69 per cent), to work in a pub or restaurant (65 per cent) or in a front-facing supermarket role (63 per cent), and even for professional athletes (57 per cent).

Two-thirds believe that tradesmen who go into people’s homes should have vaccine passports; earlier this year, London plumbing tycoon Charlie Mullins was one of the first employers to announce that he would introduce a “no vaccine, no job” clause to his employment contracts. Ipsos MORI found that 59 per cent said they would be more likely to hire a plumber if he had a vaccine passport over “one who had not been vaccinated”.

A majority of Britons — 57 per cent — also do not believe vaccine passports “are an infringement on our personal freedoms”, with 61 per cent thinking they are a “good alternative” to lockdowns.

Boris Johnson’s government is reviewing the feasibility of vaccine passports, with a final report expected in June, with the prime minister saying last week that “the basic concept of vaccine certification should not be totally alien to us”.

UK Minister: You Might Be Banned from Venues Without Vaccine Passport https://t.co/f0UOh7YnkY

A senior MP for the Liberal Democrats, which voted against renewing the emergency lockdown measures for a further six months, has criticised the government for exploring the possibility of vaccine passports. Alistair Carmichael had accused the Tories of “taking advantage of people’s desperation to get back out into some sort of normal life” and said that the government should not be trusted with citizens’ personal data.

This is not the first poll to expose Britons as largely in support of authoritarian management of the pandemic. Polls in the past several months have shown most Britons backing hypothetical measures like tracking people under quarantine using their mobile phone, with a plurality believing that police were not cracking down hard enough on lockdown rule-breakers.

One survey from early March claimed that the majority of Britons would actually miss some aspects of lockdown.