Boris Johnson’s government is instructing councils and other bodies in receipt of so-called “European” coronavirus recovery funding to cover all relevant signs and so on with the EU flag, despite Brexit.

The now-foreign symbols are a requirement for local government authorities which have been allocated money from the European Regional Development Fund (ERDF), an EU fund to which Britain is still party as a result of British contributions to the European Structural and Investment Funds Growth Programme 2014-2020 still being in play.

“The flag rule, imposed from Brussels but enforced from Whitehall, is embarrassing for [British government] ministers because they are keen to rid UK public buildings of EU flags, but do not want to turn down the Covid recovery cash,” noted the Independent in its coverage of the fiasco.

The anti-Brexit news site claims that “Under the Welcome Back Fund, councils have been given £56 million [in] EU cash” — although the extent to which this is really the case is dubious, considering Britain put far more into the EU’s coffers than it takes out, meaning the “EU cash” is essentially British taxpayers’ own money being returned to them with EU branding.

Nevertheless, guidance from the central government, led by Prime Minister Boris Johnson and the Conservative Party, meekly instructs local governments that they are “required” to emblazon the European Union flag on “every piece of signage, pavement sticker, or temporary public realm adaption” which received money through the scheme, in accordance with EU diktats which Britain — despite having left the EU — is still obeying.

According to an official frequently asked questions document published by the government in June:

36. Are we required to comply with ERDF Branding and Publicity?

37. What are the requirements for the use branding logos?

Whether or not all of this “European” recovery money is even being put to good use appears to be an open question, with Breitbart London editor Oliver Lane having spotted one piece of ERDF-branded signage seeking to, as the government puts it, “support a safe and successful reopening” by advising the public to “Please use benches responsibly”: 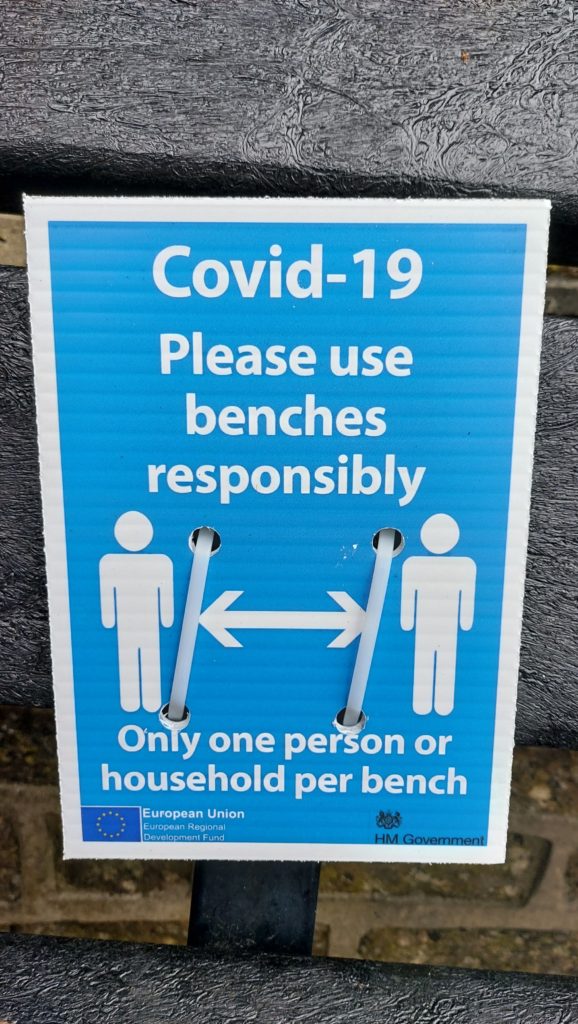 “No British council should be using the EU flag in 2021,” said Richard Tice, a former MEP and key player in the Leave.EU and Leave Means Leave campaigns and the current leader of the Brexit Party’s successor organisation, Reform UK, in comments to Breitbart London.

“The Conservative government continues to make a laughing stock of itself,” concurred Brian Monteith, another former Brexit Party MEP.

“We don’t need the EU’s help and we don’t need their flags needlessly taking credit for recirculating money we give them,” he said, adding that “Brexit is certainly not yet done.”

EU Trying to Put Spain in Charge of Gibraltar’s Borders, Visas in Brexit Side Deal https://t.co/GDz6086rLM