The woke, low-ratings Tokyo Olympics may be followed by an even woker games in 2024, with organisers already emphasising inclusivity and gender politics.

As the curtain falls on the pandemic-delayed Tokyo 2020 summer games, the International Olympic Committee (IOC) is already making plain the fact that it is “keen to set a new standard for inclusive, gender-balanced and youth-centred games” in Paris in 2024.

The next Olympics aims to be the first to achieve a 50-50 split between men and women athletes, beating out the 48.8 per cent of athletes designated as women who competed in Tokyo.

Presumably, transgender athletes such as Laurel Hubbard, a 43-year-old biologically male weightlifter who competed for New Zealand in Tokyo but has now retired, will count towards the women’s total.

Celebrations in Paris as the #Olympics officially heads to them in three years time. Athletes who competed in #Tokyo2020 among the delegation celebrating now in France | @StarSportsHub @PhilstarNews #Paris2024 pic.twitter.com/axHSLuWE77

The apparent focus on “woke” concerns comes despite the controversy which has surrounded the increasing politicisation of the Tokyo Olympics with many spectators — or former spectators — voicing discomfort with athletes using the games as an opportunity to partake in political gestures such as kneeling for the Black Lives Matter movement.

Breitbart’s John Nolte has dubbed the “Woketard Olympics” a “ratings catastrophe”, noting on Saturday that “NBC Olympics’ telecast broke an all-time low of 14.6 million viewers” and then plumbed even lower depths on Thursday with “an all-new low of just 13.3 million viewers.”

“One of the primary attractions of sporting events is rooting for someone. But once you become a woketard, you immediately morph into an entitled, unlikable, smug, hectoring, and unappealing pain in the ass no one wants to root for,” Nolte noted.

“Ultimately, that’s why everything woke, from the NBA, to the NFL, to the Oscars, are hitting record-low ratings.” 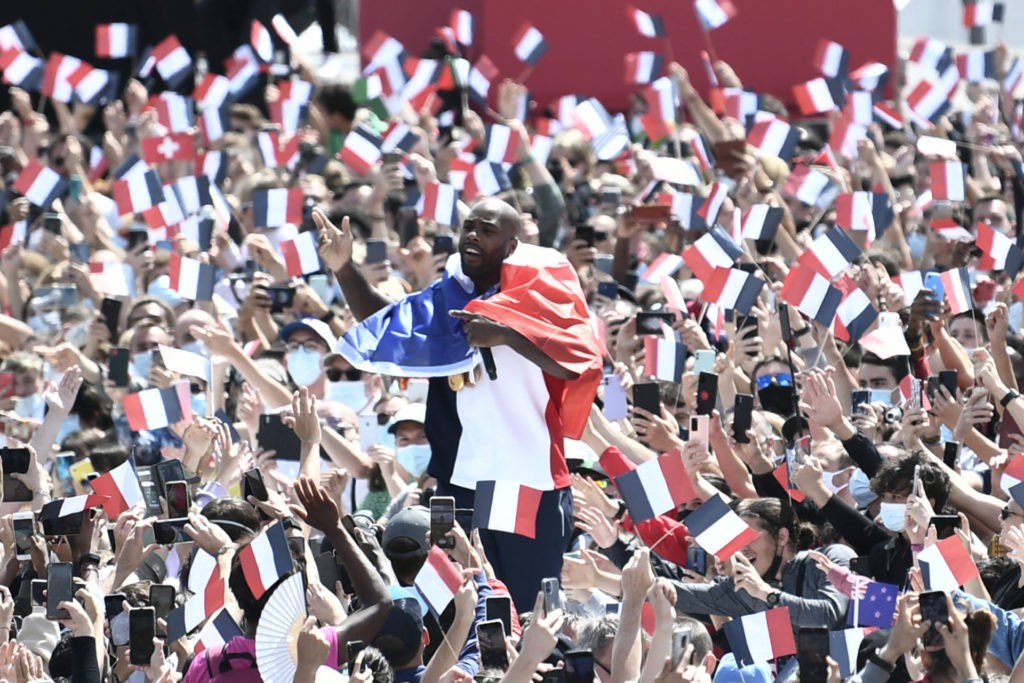 French judoka, Tokyo Olympics’ heavyweight bronze medallist and mixed team gold medallist, Teddy Riner wrapped in a French flag (C) cheers the crowd as he arrives for the transmission of the closing ceremony of the Tokyo 2020 Olympic Games, at the fan village of The Trocadero in front of The Eiffel Tower, in Paris on August 8, 2021. (Photo by STEPHANE DE SAKUTIN / AFP) (Photo by STEPHANE DE SAKUTIN/AFP via Getty Images)