Nearly four centuries after the first arrival of English ships, the Caribbean island of Barbados will officially remove Queen Elizabeth II as its head of state, renouncing the Crown in favour of becoming a republic.

While the left-wing Barbados Labour Party’s 2018 election manifesto did not emphasise cutting ties with the monarchy, the country’s constitution allowed the government to declare independence without putting the measure before the people.

Even though the former relationship between Barbados and the British monarchy will end on Monday, the island is still expecting to see widespread protests demanding reparations over the historical slave trade.

The heir to the British throne, Prince Charles, arrived on the island of Barbados on Sunday to represent his mother, Her Majesty Queen Elizabeth, during the inauguration of President-elect Sandra Mason as Elizabeth II’s replacement as the head of state.

The ceremony will come just over 23 years after Prince Charles presided over the Hong Kong handover in 1997, when the United Kingdom relinquished sovereignty in the now-former colony to Communist China.

In a possibly grim example of history repeating, there are once again fears that Beijing will attempt to use the opportunity to take control of a former British colony. 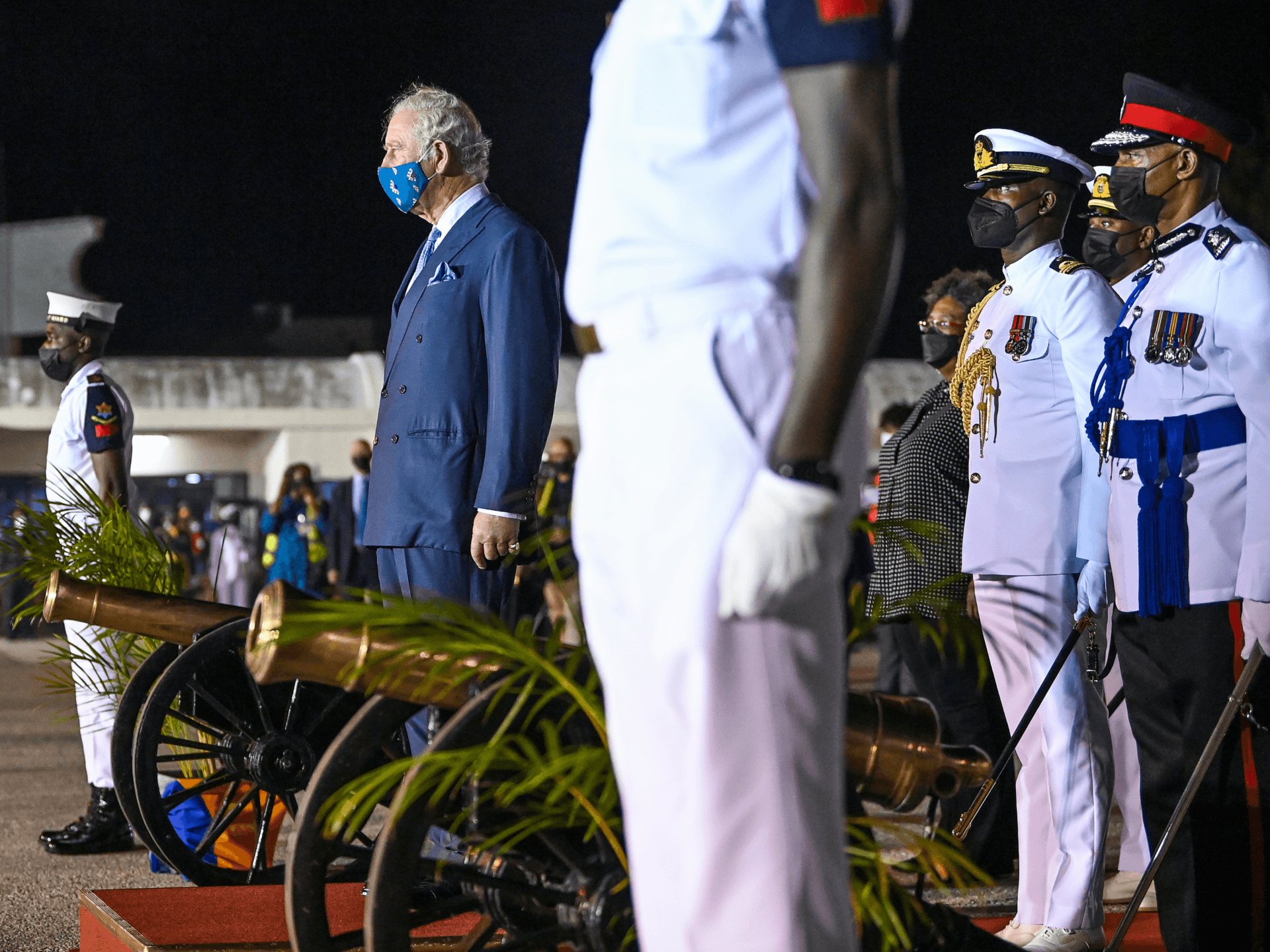 BRIDGETOWN, BARBADOS – NOVEMBER 28: Prince Charles, Prince of Wales arrives at Bridgetown Airport on November 28, 2021 in Bridgetown, Barbados. The Prince of Wales arrived in the country ahead of its transition to a republic within the Commonwealth. This week, it formally removes Queen Elizabeth as its head of state and the current governor-general, Dame Sandra Mason, will be sworn in as president. (Photo by Jeff J Mitchell/Getty Images)

China has increasingly looked to expand its Belt and Road Initiative (BRI) throughout the Caribbean. The initiative, which has been likened to a quest for global economic domination by the so-called Middle Kingdom, sees often impoverished nations sign up to massive infrastructure projects bankrolled by Beijing.

Countries often fail to pay their resulting debts, at which point the Chinese Communist Party (CCP) seizes control of the infrastructure assets in lieu of payment. Further compounding the issue of the debt-trap diplomacy, the projects are typically managed by Chinese companies who ship over workers from China, meaning the trickle-down economic benefits of construction are also taken away from the country’s citizens.

In 2019, Barbados announce that it would be signing onto the Belt and Road Initiative, with Chinese propaganda mouthpiece Belt and Road News declaring that “Barbados has a prime opportunity to position itself as a strategic partner for Chinese companies looking for a conduit into Latin America.”

Barbados also became one of the few Caribbean countries to allow the controversial Chinese telecom giant Huawei to build its 5G networks, despite warnings from the U.S. government that the effectively state-owned company could use its networks for espionage purposes.

Prime Minister Mia Mottley of the left-wing Barbados Labour Party has sought friendly relations with Chinese dictator Xi Jinping, hailing him for allegedly eliminating poverty in China — a feat the CCP accomplished through artificially changing the standard of poverty.

Xi Jinping has also heaped praise on Barbados, declaring earlier this year that the island nation was a “good friend” and “partner” of China, saying that his nation is “ready to enhance exchanges in governance and expand cooperation in areas such as infrastructure to push forward the bilateral cooperation to a higher level.”

The communist state has sought influence over other British Commonwealth nations in the Caribbean, taking control of the Port of Kingston in Jamaica under a 30-year agreement with the local government, for example. China has also offered Jamaica billions in Belt and Road-style loans for the construction of new highways and other infrastructure projects on the island.

Commenting on the communist infiltration of the British Commonwealth, the director of the Henry Jackson Society, Alan Mendoza told The Telegraph: “They would like to undermine whatever they can internationally, so they can pick off countries and prevent anti-Chinese resolutions in the Commonwealth and elsewhere.

“It is a very clever move and we have come late to the party by not really understanding the extent of this challenge.

“China is commercially preying on the Commonwealth. The question is, can we respond with a better offering? Can the UK steer western investment funds into these places?”

The chairman of the British parliament’s influential foreign affairs select committee, Tom Tugendhat, lamented on Saturday that over the past decade there has been “change among Commonwealth nations,” saying: “Beijing is trying to replace a symbolic Queen with a very real emperor.”