A man was arrested Tuesday after an egg was thrown at new monarch Charles III while on walkabout meeting members of the public in an English town.

An egg was seen flying towards King Charles III on Tuesday, but missed the monarch who was out meeting members of the public while visiting the town of Luton for a day of engagements. The King was moved away from the site by his bodyguard but, characteristically for Charles, he continued with his tour and meeting the public outside the town hall despite the incident, the AP said.

Engagements for the day for the king included a visit to a local railway station and a Sikh temple or Gurdwara, where the King met local Sikh leaders, removed his shoes as he entered, and placed his hands together in a sign of namaste, The Daily Mail reports.

Local police said a man in his 20s had been arrested on suspicion of common assault and was being questioned. 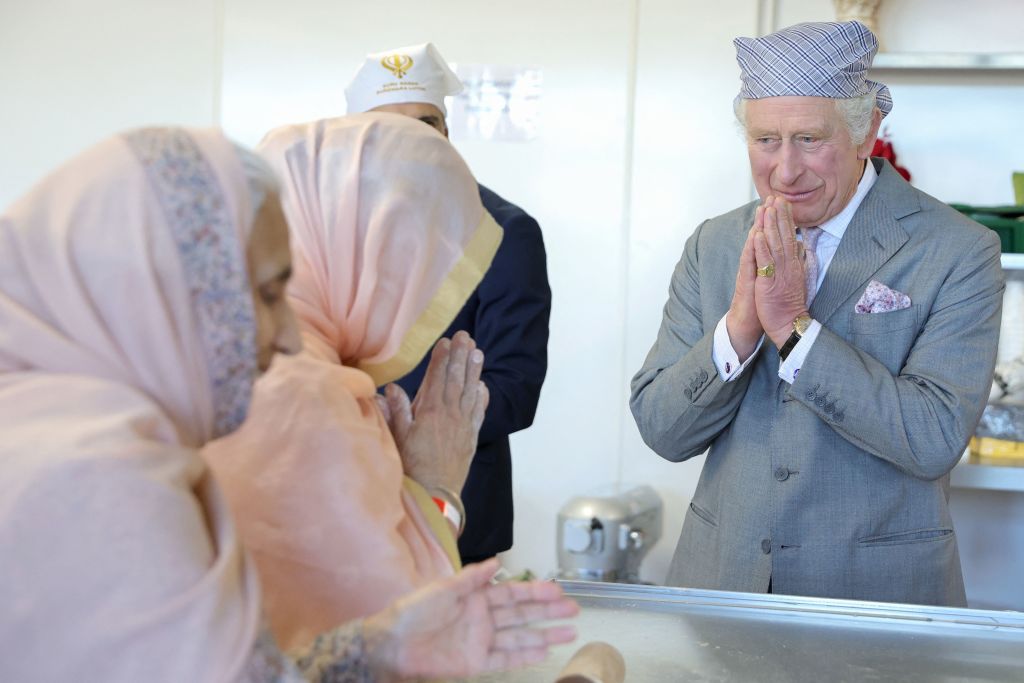 Britain’s King Charles III makes the traditional namaste gesture as he speaks to volunteers and learns about the programmes they deliver for the local community during a visit to the newly built Guru Nanak Gurdwara, in Luton, north of London on December 6, 2022. CHRIS JACKSON/POOL/AFP via Getty Images)

The egg-throwing is the second such incident in a month for the new King, who as well as being monarch of the United Kingdom also serves the role for a roster of world nations including Canada, Australia, Papua New Guinea, and New Zealand. As Breitbart reported on November 9th, a protester threw four eggs at the King while he was on walkabout in the City of York, all of which were misses.

A 23-year-old male was arrested then who was later released on bail. The egg thrower of that incident was subsequently identified as a long-time left-wing activist who had previously stood for election for the Green party and had been arrested with the Extinction Rebellion protest group in the past. Whether today’s egg-throwing was also the work of a professional malcontent like November’s is yet to be seen.

While the two egg-throwing incidents by young men can’t be denied, and were not a feature of the late period of Queen Elizabeth II’s reign, they do not appear to herald a collapse in support for the monarchy or King Charles himself in the British public. Indeed, recent polling by YouGov found that not only was the monarchy popular, with 60 per cent of Britons supporting to 30 per cent against, but King Charles himself enjoyed an even higher personal rating than the institution he leads, with 67 for to 24 against.

Asked in the summer, a poll of Britons by YouGov found that clear majorities said the monarchy was good for Britain and should continue in preference to an elected head of state.