Americans overwhelmingly dismiss corporate demands for more legal and illegal immigrant workers, even at the threatened cost of higher inflation.

Instead, by a factor of more than two to one, Americans agree companies “should raise wages and try harder to recruit Americans even if it causes the prices of their products to rise,” according to a July 20-22 poll by YouGov.com

The poll asked 1,000 citizens: “When businesses say they are having trouble finding Americans to take jobs in construction, manufacturing, hospitality, and other service work, what do you think they should do?”

Just 22 percent agreed with the pro-migration view, that employers “should recruit immigrant workers to help keep business costs and prices down.”

The remaining 28 percent percent of respondents said they were “not sure.” Their answer suggests those adults did not care about the issue.

So 50 percent “raise wages” group is more than two-thirds of the respondents who had an opinion on the question. 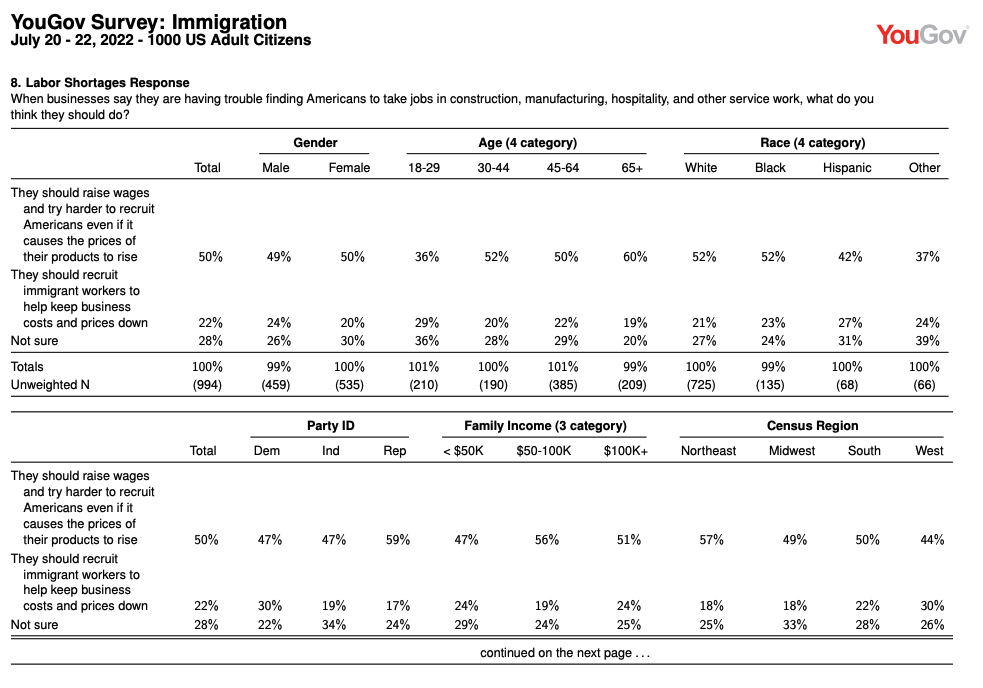 The polls’ crosstabs show the 2:1 favoritism towards fellow American employees in nearly all demographic groups.

The subgroups least favorable to Americans were Democrats, Asians, Hispanics, and younger voters, which includes a disproportionate share of Hispanics and immigrants.

The subgroups most favorable toward fellow Americans were Republicans, older people, and middle-income people.

The data shows a 25-point difference between the two parties.

However, so far, GOP leaders have dodged the jobs and wages issue in their frequent denunciations of the Democratic Party’s growing favoritism for immigrants over Americans.

For example, New York’s Governor recently touted the bussed-in southern economic migrants as ready to replace Americans in the workforce. The inflow of low-wage workers “is good for our economy,” Democratic Gov. Kathy Hochul claimed on August 11. “I just did a farm tour upstate New York — they’re begging for workers,” she told media outlets, according to the New York Post:

The Biden Administration’s refusal to secure our nation’s border is resulting in a historic influx of illegal immigrants, who are being transported to their destinations of choice, including New York. This creates a significant stress on state and local resources, and also increases security risks.

However, the YouGov poll showed that Americans in the northeast – including New York — took the strongest position in favor of American employees, 57 percent to 18 percent.

But the state party is deeply reliant on investors for funding. Those investors stand to gain from an inflow of immigrant workers, consumers, and renters — yet they also stand to lose when Democrats raise taxes and regulations, impose price controls, and skew social status in favor of their diversity coalition.

So far, GOP investors nationwide have insisted on their migration priorities even though the GOP needs to win swing voters and spike turnout by the GOP’s free-market base.

The YouGov results are echoed by prior polls and by Rasmussen Reports.

Since 2019, Rasmussen’s bi-weekly “Immigration Index” polls show a lopsided 3:1 favoritism towards employees over employers who want to hire foreign workers.

When businesses say they are having trouble finding Americans to take jobs in construction, manufacturing, hospitality and other service work, what is generally best for the country? Is it better for businesses to raise the pay and try harder to recruit non-working Americans even if it causes prices to rise, or is it better for the government to bring in new foreign workers to help keep business costs and prices down?

The policy of Extraction Migration is central to the U.S. economy. The policy extracts human material — migrants — from poor countries and uses them as workers, renters, and consumers to shift vast wealth from ordinary people to billionaires and Wall St.

Since at least 1990, the D.C. establishment has extracted tens of millions of legal and illegal migrants — plus temporary visa workers — from poor countries to serve as workers, managers, consumers, and renters for various U.S. investors and CEOs.

This policy of labor inflation makes it difficult for ordinary Americans to get married, advance in their careers, raise families, or buy homes.

Migration undermines employees’ workplace rights, and it widens the regional wealth gaps between the Democrats’ big coastal states and the Republicans’ heartland and southern states. The flood of cheap labor tilts the economy towards low-productivity jobs and has shoved at least ten million American men out of the labor force.

The economic policy is backed by progressives who wish to transform the U.S. from a society governed by European-origin civic culture into a progressive-directed empire of competitive, resentful identity groups. “We’re trying to become the first multiracial, multi-ethnic superpower in the world,” Rep. Rohit Khanna (D-CA) told the New York Times in March 2022. “It will be an extraordinary achievement … we will ultimately triumph,” he boasted.

The progressives’ colonialism-like economic strategy kills many migrants. It exploits the poverty of migrants and splits foreign families as it extracts human resources from poor home countries to serve wealthy U.S. investors. This migration policy also minimizes shareholder pressure on U.S. companies to build up beneficial and complementary trade with people in poor countries.

Business-backed progressive advocates hide this Extraction Migration economic policy behind a wide variety of noble-sounding explanations and theatrical border security programs. Progressives claim that the U.S. is a “Nation of Immigrants,” that migration is good for migrants, and that the state must renew itself by replacing populations.

Many polls show the public wants to welcome some immigration — but they also show a deep and broad public opposition to labor migration and the inflow of temporary contract workers into jobs sought by young U.S. graduates.

This “Third Rail” opposition is growing, anti-establishment, multiracial, cross-sex, non-racist, class-based, bipartisan, rational, persistent, and recognizes the solidarity that American citizens owe to one another.