The media-magnified focus on Indian workers and immigration “country caps” is hiding a massive corporate giveaway in the House’s pending EAGLE Act, now scheduled for a committee review on Monday and a House vote on Tuesday.

The bill “just blows the limits [on the hiring of temporary visa-workers] out in the water and makes all of these temporary worker programs permanent, so that all of these jobs will be permanently removed from American workers,” Rosemary Jenks, the director of government relations at NumbersUSA.

“Congress is using an immigration ploy to lock Americans out of a growing part of the labor market … They’re dead serious about it,” she said.

The bill allows corporations to pay foreign workers with permanently renewable work permits in exchange for several years of uncomplaining, l0w-wage work in the U.S.

Those “Employment Authorization” permits are extremely valuable because they allow the workers to hold U.S. jobs until they can receive their promised green cards. The green cards can then be traded to get the deferred mega-bonus of American citizenship for themselves, their families, grandchildren, and all of their descendants.

Corporations that can pay workers with government-provided work permits and green cards will be more likely to hire foreigners than Americans because Americans want to be paid fair-market wages.

Commercial contracts for Indentured Service were made unconstitutional by the 13th amendment after the Civil War.

The work-for-work-permits bill is numbered H.R.3648, and is titled the “EAGLE Act of 2022.” It has 83 sponsors, including eight Republicans.

The chief sponsor of the bill is Rep. Zoe Lofgren D-CA), who represents Silicon Valley investors and companies. Those investors — such as FWD.us — stand to gain from an expanded ability to recruit foreign workers with dangled offers of fast-track work permits and green cards, so they are eager to spotlight the subsidiary “country caps” aspect of the bill and to hide the work-for-work-permits expansion.

The leading GOP backer is Rep. John Curtis (R-UT), whose home-state establishment has pushed for similar bills for more than a decade. Utah advocates expect their support for the bill will spur investment by Indian subcontractors in the state, so creating a wave of new revenue for home builders, landowners, and retail outlets.

The corporate giveaway bill is also backed by Rep. Tom Emmer (R-MN). He was elected party whip for the 20223 Congress, after running a partly successful 2022 election campaign that suppressed GOP debate about the huge and growing pocketbook impact of migration on American families.

The bill is being reviewed by the House rules committee today prior to a floor debate, which may take place on Tuesday.

In the Senate, the chief GOP supporter for the bill is Sen, Kevin Cramer (R-ND). He is under pressure from major corporations that want to recruit more visa workers for jobs in the Dakotas, even though the bill will also sideline many U.S. graduates and will redirect job-creating investments out of North Dakota.

The bill is opposed by immigration reform groups, such as Jenks’ NumbersUSA. The bill is also opposed by other groups of migrants from Iran and China who fear their access will be blocked by the huge inflow of Indian workers.

The work-permit giveaway is hidden in Section 7

The section creates the permanent work permits — dubbed the “green card lite” — and then covertly expands eligibility to many visa-worker programs beyond the H-1B program.

Instead of waiting several or more years for green cards, permanent work permits would be provided just two years after each foreign worker is approved for a green card. 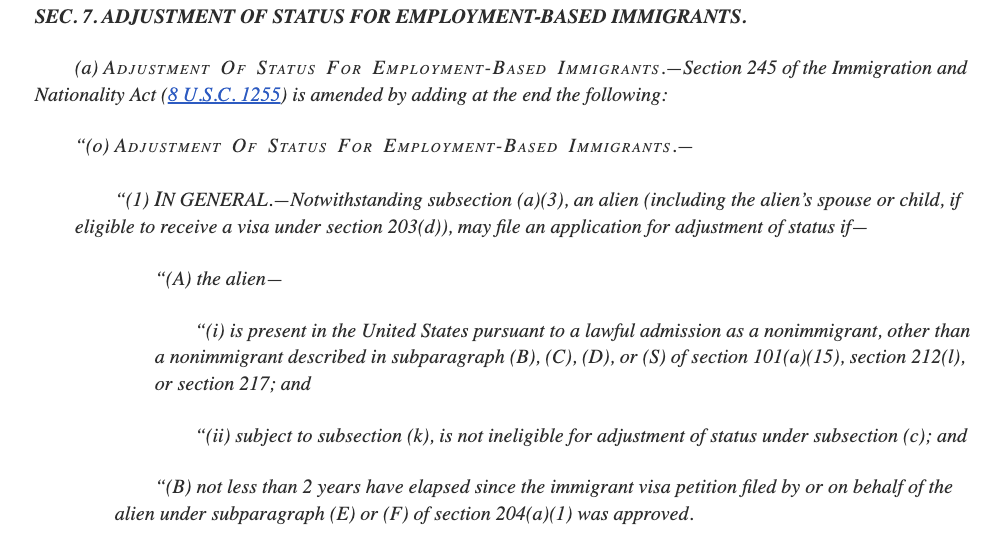 The corporate giveaway is also buried underneath much legalese about the award of more green cards to roughly 300,000 Indians who now hold H-12B and L-1 visas, and usually, work for Fortune 500 companies and their vast pyramids of subcontractors.

The debate over Indian green cards has grabbed most of the coverage of the bill, partly because of the extremely aggressive lobbying by the Indian contract workers. That lobbying features many claims of entitlement by Indians, much tweet contempt towards Americans, and a flowering diversity of “Racism!” claims directed against opponents and sympathizers, such as Sen. Dick Durbin D-Ill.

The federal government already operates a huge variety of little-known temporary work programs for many types of jobs, alongside the inflow of legal and illegal immigrants. These temporary workers are not immigrants — they are just contract workers who can be sent home by middle-manager in the HR department.

‘The government sets no annual limits on the number of H-2A agricultural visa workers, or L-1 visa corporate-transfer workers, on H-1B white-collar workers, E-2 investor visas, or F-1/OPT work permits given to foreign graduates of U.S. universities. There is a limit of roughly 150,000 H-2B workers used in non-agricultural labor and service workers.

But only about 70,000 workers per year can get green cards via this process, so most of those temporary workers go home after a year or several years. Many others overstay their temporary visas to work illegally in white-collar or blue-collar jobs.

Most foreign nationals who are approved by their employers for green cards quickly get their green cards in the mail.

The huge crush of Indians who want green cards ensures that a subset of Indians must wait several years or even a decade. That wait has prompted much lobbying by the Indian contract workers — and a myriad of sympathetic articles and lobbyist visits. But the “queue exists because U.S. employers sponsor more foreign nationals and their family members for EB1, EB2, and EB3 employment-based green cards each year than can be issued under current INA annual limits,” according to a July 2022 report by the Congressional Research Service.

There is also a growing green card backlog among workers from Central America, many of whom have been hired at very low wages for jobs at U.S. chicken-processing janitorial and transport companies.

The overall population of visa workers, including the waiting Indians, hold about 1.5 million white-collar jobs, and about 400,000 blue-collar jobs.

The work-for-work-permit section is likely to expand the use of foreign workers in place of Americans and to steer more job investments toward the big coastal states.

In 2022, a lawsuit against the H1B program described how corrupt Indian managers sold multiple tickets for the H-1B lottery to their fellow Indian nationals:

phony companies created a pay-to-play scheme where they charge individuals to submit multiple registrations on their behalf. See Exhibit. A (compilation of advertisements promoting H-1B abuse). For example, one individual selected in this year’s lottery reported that the consultancy he used for H-1B registration purposes was seeking $4,500 from him in order to submit an H-1B petition on his behalf.

For example, one entity, which calls itself “Fluxtek Solutions,” advertised that they “will place you on H-1 lottery from multiple companies so that the probability of picking cap process is high.” … Fluxtek Solutions was also promising its customers “100% job Guaranteed with H1B Visa Sponsorship.”

Because the H-1B and L-1 Visa are dual-intent visas, what these Indian workers are hoping for is a Green Card sponsorship from their employers before the duration (6yrs) on their H-1B visa expires. Bribing an employer or a third party for visa sponsorship is common practice. pic.twitter.com/xyzIrwIlYQ

In October, a federal court also approved the expanding and uncapped OPT work-permit program, even though it was not created by Congress. The program awards work permits to roughly 300,00 foreign graduates each year.

The H-1B and other visa programs allow Fortune 500 companies and their subcontractors to recruit and import low-wage, mid-skill foreign professionals for a very wide variety of jobs needed by American graduates, including in science, Silicon Valley, journalism, fashion, and healthcare.

That huge population of indentured visa workers has had a huge impact on many white-collar and professional workplaces rarely visited by media outlets.

The replacement of free-speaking American professionals with indentured foreign labor also allows executives to discard important civic priorities. These priorities — such as security, privacy, and durability of high-tech infrastructure — are sacrificed to lower costs and raise stock prices. The resulting damage was exposed by losses at Intel, Boeing, and Theranos.

In conversations with Breitbart, immigrant workers from Indian and other countries have described the damaging impact of CEOs’ use of indentured workers.

“I have seen the system in the backend, and it is so appalling to see that there is so much [resume] forgery being done, there’s so much of corruption being done, that it is almost to the level back in India,” said Aabha, an Indian in North Carolina. Aabha continued:

I have met so many [American] people who are graduates and so much more knowledgeable than the Indians that I see in my regular [work]day — and they are [saying] like “Okay, because we are not experienced, we are not getting [technology] jobs.” So they decide to do a blue collar job. They’re walking into Walmart, they’re walking into Best Buy. And these Indians, the team that I work with, they cannot even speak a single sentence in English without making any mistakes.

Indian-run subcontractors and visa workers can forge resumes and technical credentials because U.S. employers “do not really do background verification unless and until they hire you as a full-time employee,” Aabha said, adding:

Just in case the [U.S.] employers need to check, the [Indian subcontractors] create one small office in India, they take a rental apartment in India, they put poor people there, they [instruct them to say]  “If you get any calls, tell them that this person has experience.” That it. It’s as simple as that.

Once hired at U.S. wage rates, untrained Indian software workers pay qualified Indians in India to do the actual work on their U.S. computer at Indian wage rates, regardless of U.S. privacy and secrecy laws, Aabha said:

But the imported Indian workplace culture is increasingly dominant in U.S. Fortune 500 companies, in part, because it matches the ruthless worldview of Wall Street investors, one U.S.worker told Breitbart News. “The fact of the matter is, the people on Wall Street don’t care — they want the bottom line.”