Capitalism is the most popular ideology among citizens of Venezuela, a poll released this weekend found, and most who want to see dictator Nicolás Maduro vacate power before the end of the year see anti-Maduro opposition leaders as sell-outs to socialism.

The Venezuelan polling firm Meganálisis published the results of its September 14, 2020, poll this weekend, taken amid growing rifts between socialist members of the anti-Maduro opposition and conservative leaders seeking a full divorce from the ideology. Maduro has scheduled elections to replace lawmakers in the National Assembly, the federal legislature, for December, splitting establishment opposition figures between those who wish to trust Maduro’s election apparatus and participate and those seeking a boycott.

Juan Guaidó, the legal president of Venezuela, has repeatedly changed positions on his support for participating in the elections.

Maduro has presided over at least five elections during his tenure marred by accusations of corruption, cheating, candidate intimidation, and other unfree tactics. Prior to December’s election, Maduro reconfigured the membership of the National Electoral Council (CNE) to pack its membership with socialist loyalists, including sanctioned officials and at least one Holocaust denier. 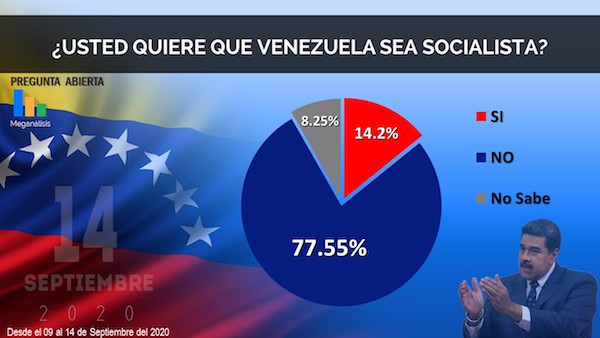 Against this backdrop, Meganálisis asked respondents – 1,031 people from a nationwide sample – “Do you want Venezuela to be socialist?” Of those asked, 77.55 percent said “no,” only 14.2 percent said “yes,” and 8.25 percent said they did not know.

The polling firm then asked the majority who rejected socialism what their preferred ideology would be to guide Venezuela. The vast majority of these – 72.3 percent, said “capitalism.” The second most popular ideology was “social democrat,” a common political system among the establishment opposition; 5.7 percent said “social Christian,” and 7.6 percent said “no ideology.” 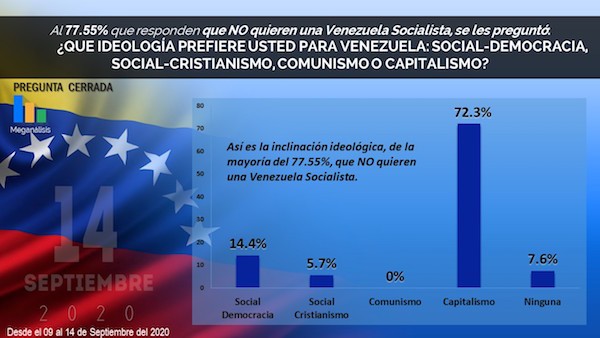 As is to be expected, zero percent of those who rejected socialism said they preferred communism to the status quo.

Maduro’s regime remains deeply unpopular, the poll found. Most respondents – 79.21 percent – said “yes” to the question, “Do you support Maduro and chavismo leaving power before the end of the year?” Only 13.16 percent said no.

Among his supporters, Maduro received the most positive reply, suggesting that Maduro is not facing a significant challenge among his own ranks for power. Second to Maduro was Diosdado Cabello, a television host and U.S.-sanctioned drug trafficker believed to be Maduro’s second-in-command, with 16.26 percent of those who support Maduro staying in power saying that Cabello inspires confidence. The least popular chavista officials was Delcy Rodríguez, Maduro’s new economic minister who once claimed the U.S. dollar “does not exist.”

The poll did not question Maduro supporters on the credibility of Tareck El Aissami, who controls the nation’s oil and natural resource wealth as Minister of Industries and Natural Production. The U.S. Immigration and Customs Enforcement (ICE) issued a wanted notice for El Aissami last year over his suspected role in narcotics trafficking; experts also believe El Aissami to be Maduro’s top liaison with the Iranian terrorist group Hezbollah.

Overall, Venezuelan respondents revealed tremendous pessimism regarding the future of their country. Meganálisis asked Venezuelans to choose one of three phrases to describe life in Venezuela. By far the most popular, chosen by 82.5 percent of those asked, was “Life in Venezuela is chaos, nothing works, everything is a disaster, there is no hope that it will change.”

The least popular statement, at 2.3 percent, was “Life in Venezuela is excellent, things function, we live calmly and there is ample hope [for the future].”

Venezuelans have endured extreme food, water, and medicine shortages since Maduro took power in 2013. In the past year, shortages of gasoline and rolling blackouts have made life significantly more difficult. Under Maduro, the socialist regime has invested very little in nationwide infrastructure, resulting in a decaying system. The Venezuelan Observatory of Social Conflict, an independent organization, documented nearly 750 protests nationwide in August – about 30 protests a day – demanding electricity, water, food, and other basic needs.

Of particular concern is Maduro’s destruction of Petróleos de Venezuela (PDVSA), the state-run oil company seized by late dictator Hugo Chávez and reduced to non-functionality by the removal of experienced engineers and their replacement with socialist loyalists. Venezuela has the world’s second-largest known oil reserves after America, but its crude oil is extremely heavy and needs sophisticated refining. Maduro has essentially obliterated Venezuela’s ability to refine oil by failing to maintain the nation’s refineries, resulting in nationwide gasoline shortages and the unprecedented move in the country of importing gasoline from other countries.