Cuban communists flooded social media outlets with images of mobs holding firearms, sticks, rocks, and other makeshift weapons as part of “acts of revolutionary affirmation” meant to scare political dissidents out of participating in a march planned for November 15, multiple outlets reported on Monday.

The various violent images formed part of the Communist Party’s “Territorial Day of Defense,” nominally meant to show the world that Cubans are ready to attack anyone working to liberate the island from communism. The Castro dynasty has subjugated the island since dictator Fidel Castro seized power in 1959.

The acts occurred on the same weekend as the incumbent figurehead of the Castro dynasty, Miguel Díaz-Canel, called the proposed peaceful march an “act of subordination to Yankee hegemony” and threatened that Cubans would “combat by all means” any attempt to establish democracy – a threat of violence to civilians considering engaging in pro-democratic action. Díaz-Canel explicitly condemned the November 15 march rather than take the typical approach of hinting vaguely at “counterrevolutionary” forces. 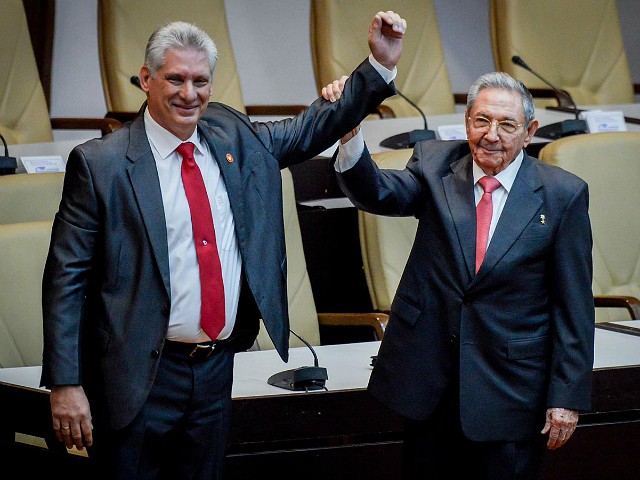 The march, if successful, would be the first nationwide organized peaceful effort against communism since July 11, when an estimated 187,000 Cubans in every province on the island took the streets demanding an end to the Castro regime. Communist Party security forces responded by arresting hundreds of people – including many bystanders who did not participate in the protests – and conducting violent home raids resulting in severe injuries to suspected protesters, some shot in front of their families.

“THE STREETS BELONG TO THE REVOLUTIONARIES,” one such regime propagandist, Marta Fernández, wrote as a caption to her photos on Facebook on Sunday. Fernández described the display as intended to “perfect the defense under the concept of an all people’s war.”

Another such social media video showed communists in Cárdenas, a city in Matanzas province, simulating a response to an “attack” by peaceful protesters. Some of those in the video appear menacingly brandishing sticks. Spanish-language journalists identified the people in the photos as members of the local Committee for the Defense of the Revolution (CDR), a communist civilian espionage brigade.

Other images showed Cubans practicing stoning unspecified enemies in scenes that resemble track and field practices. The participants railed against “mercenaries” – a smear the Castro regime uses liberally, and falsely, against pro-democracy dissidents – and vowed to fight them “to the last drop of blood.”

The Cuban independent online publication 14 y Medio noted in its report on the events that Cuban state media omitted coverage of such events from its news broadcasts – regime journalists only posted the images online. Observers concluded from this that the target audience for the content was young people who more regularly get their news from the internet and do not pay much attention to televised government propaganda.

For those individuals, Díaz-Canel addressed the nation in a formal speech on Sunday where he renewed a call he made in July for civilians to attack political dissidents. The Castro constitution, he said, “asserts, among other things, that the socialist system … is irrevocable, and that citizens have the right to fight by any means against anyone intending to derail the political, social, and economic order established by the Constitution.” 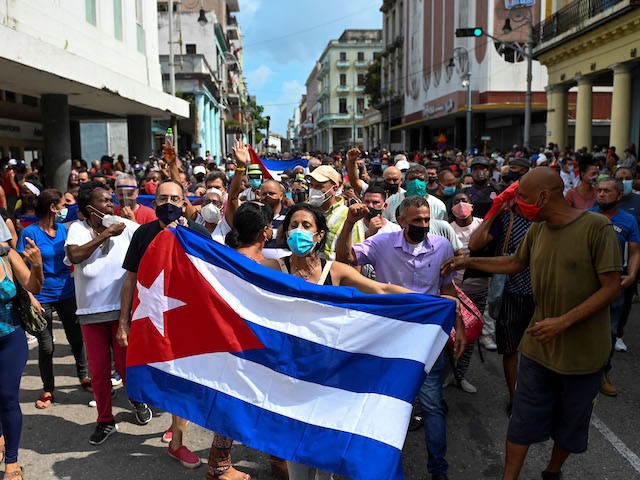 People take part in a demonstration to support the government of Cuban President Miguel Diaz-Canel in Havana, on July 11, 2021. (Yamil Lage/AFP via Getty Images)

Any peaceful expression of dissent with the regime “is not a civic act – it is an act of subordination to Yankee hegemony,” Díaz-Canel asserted.

“There are enough revolutionaries here to confront with intelligence, respect, and in defense of our Constitution, but with energy and courage, as well,” Díaz-Canel concluded, “any type of manifestation that seeks to destroy the Revolution.”

The appointed successor to Raúl Castro, whose family retains power in every major Cuban institution, asserted that the November 15 call to march against the regime was “an escalation in the way to act against the Revolution and a challenge to authorities and the State of socialist rights.” He blamed the United States for allegedly planning the grassroots pro-democracy act, offering no evidence for his claim.

Díaz-Canel more concretely urged Cuban to engage in violence against fellow citizens in July following the eruption of protests against the regime that month.

“We are calling all the revolutionaries of our country, all the communists, to go to the streets anywhere that these provocations are happening today, from now on through all these days,” Díaz-Canel urged.

A group of dissidents who identify by the name “Archipelago” is calling for a protest on November 15. They took the unprecedented step of applying for a permit for the public assembly through the government this month, a request the regime rapidly rejected. 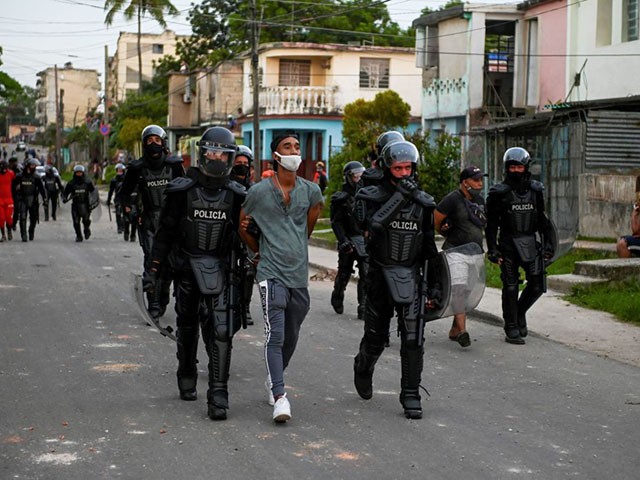 A man is arrested during a demonstration against the government of President Miguel Diaz-Canel in Arroyo Naranjo Municipality, Havana, on July 12, 2021. (Yamil Lage/AFP via Getty Images)

The Spanish newspaper El País reported on Monday that hundreds of people arrested in July remain behind bars as of this week. Human rights groups have documented widespread due process violations since this summer, including mass trials for suspected protesters arrested for a variety of unrelated “crimes” and the processing of minors in courts for adults. Prosecutors are demanding as much as 25 years in prison for some dissidents.