Argentina’s socialist Peronist coalition received a pummeling at the polls on Sunday, losing the Senate for the first time since 1983 and suffering major defeats in Buenos Aires, the capital and largest city.

Voters soundly rejected the coalition formally known as the Front for All (Frente de Todos) after a disastrous two years for President Alberto Fernández defined by national outrage at Chinese coronavirus quarantine protocol, forced masking, and economic devastation. Fernández’s regime endured months of protest in response to coronavirus lockdowns, increased taxes, and a scandal in which reports revealed that the socialists had hoarded and used coronavirus vaccines among themselves before sharing them with the public. Among other coronavirus-related scandals were a Peronist lawmaker fondling a woman who was not his wife during a Congressional Zoom session; a Peronist senator declaring, “you have rights, but not during a pandemic;” and mob violence during the funeral of cheating Argentine soccer legend and fervent communist Diego Armando Maradona.

Complicating the situation for the socialists has been the rise of a pro-freedom movement led by libertarian economist Javier Milei, who began his career as a charismatic television personality and has since built a political coalition known as Liberty Advances (La Libertad Avanza). Local reports place most of Sunday’s energy at the Liberty Advances headquarters, noting a high number of young supporters and an atmosphere described as resembling a rock concert.

The Front for All is the latest iteration of “Peronism,” named after late dictator Juan Perón. Given its founder’s notorious refusal to align with any one ideology, “Peronism” has for much of its existence attracted both socialists and fascists and identified publicly only as vaguely “populist.” Now spearheaded by far-left socialists and redefined in the image of former presidents Nestor Kirchner and Cristina Fernández de Kirchner, the Front for All is an openly socialist, elitist party. Fernández de Kirchner currently serves as vice president despite a long record of corruption accusations and evidence that she used the presidency to protect Iranian terrorists. 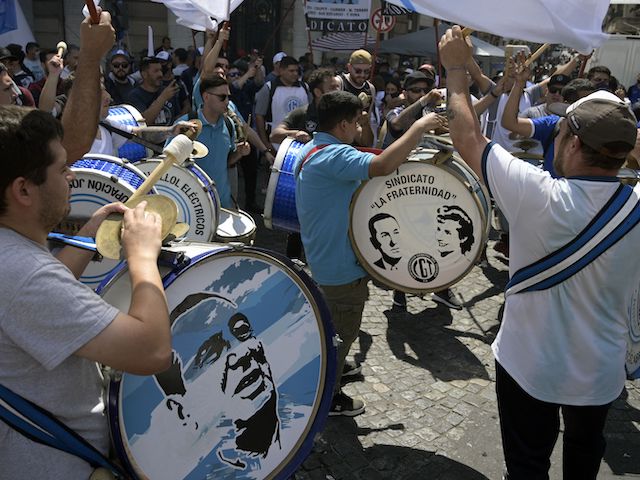 People play drums with portraits of late former leader Juan Domingo Peron and his wife Eva Duarte, also konwn as “Evita”, during a march in Buenos Aires on October 18, 2021, during a rally to celebrate the Day of the Loyalty to Peronism. (Juan Mabromata/AFP via Getty Images)

The Front for All’s losses most directly benefitted the establishment center-right coalition of former President Mauricio Macri, Together for a Change (Juntos por el Cambio). Together for a Change is now the largest bloc in the Senate and made significant gains in the lower house of Congress. Observers noted that this did not necessarily mean that the center-right establishment had returned to the public’s good graces.

“If you look at yesterday, the opposition won. If you look at the process of the last two years, nobody won,” columnist Carlos Pagni with La Nación remarked. Pagni described the election as “a challenge to the political class and, in some moments, to politics itself.”

The local victories for Liberty Advances – which became the third most powerful party in the Buenos Aires region despite having no establishment support and being the brainchild of a television pundit – highlight this. That pundit, Milei, is believed to be headed to Congress, though not all votes have been counted at press time. Milei regularly describes career politicians as a “high caste” that he wishes to destroy and expresses viscerally a disgust for socialism and the state in general.

During remarks on Sunday night, Milei, the party leader, asserted that he would not allow his party to engage in any coalition with establishment parties.

“We are telling the tyrant Alberto Fernández that we will not sit down and negotiate,” he said, to chants of “freedom” from the audience.

“They told us that we liberals [libertarians] were cute but we couldn’t get any votes and that we were not going to defeat the left,” Milei declared, according to Argentine newspaper Clarín.

Milei also reportedly announced he would run for president in 2023.

Clarín described the headquarters of the Milei coalition as “euphoric” and eccentric, populated by a variety of youth, pro-freedom voters clearly inspired by American conservatism.

“[Some] wore the ‘Make America Great Again’ hat former President Donald Trump popularized and there were also some characters,” Clarín detailed, “like a young man in a headband, a tunic, and a giant treble clef that he played like an electric guitar.” Others present included internet celebrities known as “the Human Barbie” and the “Human Elf.” Salesmen offered revelers merchandise branded with Trump’s image as well as those of Milei and Brazilian President Jair Bolsonaro. Some offered cards in the style of Catholic saint prayer cards emblazoned with Milei’s image.

Despite some of the bizarre displays at Milei’s party, Argentine media appeared to make more fun of Fernández’s party than Milei’s. The historic loss appeared to have no effect on the Front for All’s approach to the night, resulting in Fernández and several other key establishment figures offering “victory” speeches. Fernández reportedly asked the audience to “celebrate this triumph appropriately,” a quote the Argentine news outlet Infobae comically modified with a “[sic].” Infobae noted that the governor of Buenos Aires province, Kirchnerist mainstay Axel Kicillof, bizarrely celebrated that the turnout in the general election was slightly higher than in this year’s primaries – which happens in nearly every election.

“Anyone who didn’t have any information and saw what happened last night would conclude that this is a group of people who had succeeded at something,” Infobae quipped. “The truth is the exact opposite.”

“The ruling party lost but appears intent in pretending that nothing happened,” Clarin observed in a column titled “Someone Should Tell Alberto Fernández That He Lost.” “It is understood: they expected an electoral shellacking and it was just an important, inevitable defeat – despite the immense, and obscene, use of public funding and the state apparatus for their own benefit.”