A total of 469 suicide bombings carried out by 800 perpetrators across 28 countries, causing the deaths of about 5,650 people made 2016 the worst year ever for this deadly form of terrorist atrocity.

According to figures released by the Terrorism and Low Intensity Conflict Research Program at Tel Aviv University’s Institute for National Security Studies (INSS),  Islamic State continues to be the world’s leading perpetrator of these mass casualty attacks – and 2017 may be even worse.

In 2016, Islamic State attackers were directly or indirectly responsible (through organizations that swore allegiance to it and joined its ranks) for approximately 70 per cent (322) of suicide bombings. See INSS figures below: 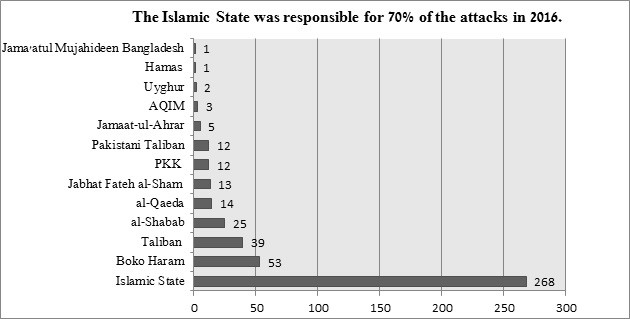 Rather than an indicator of strength, the report says increasing numbers of suicide attack represent a reaction by Islamic State to “territorial losses and the increasing international efforts to drive it out of the areas it controls.”

The report goes on to warn that “suicide terrorism will be a key tool for the Islamic State in consolidating its image as invincible, creating deterrence against its enemies, and taking revenge for the international activity against it. The Islamic State’s partners and other terrorist groups will also likely redouble their efforts to carry out mass casualty large scale terrorist attacks.”

The vast majority of the suicide bombings in the region, about 90 per cent, were carried out by the Islamic State and its affiliated organizations.

According to the report, the involvement of women in the suicide bombings in 2016 was again significant. It states:

“A total of 44 suicide bombings were carried out during the year with the involvement of 77 women in 8 countries around the world, causing the death of approximately 400 people. Although the number of suicide bombings carried out by women fell sharply, compared with the record number of 118 suicide bombings in 2015, it appears that the use of women as suicide terrorists expanded this year, primarily in theaters in which they had not previously operated: France, Austria, Morocco, Libya, Bangladesh, and Indonesia (most of these operations were foiled by the security forces).” See INSS figures below:

The Middle East alone is not the only target of suicide bombers, according to the research.

It related that Western Europe became a more active theater for suicide bombings in 2016. Signs of this trend emerged in late 2015 in a series of bombings in Paris that marked the first fulfillment of the Islamic State’s threat to strike in the heart of Europe.

Yoram Schweitzer, the senior research fellow who headed the study, sees a correlation between the rise in suicide bombings and the growing intensity of terrorism worldwide. “They are the litmus test when it comes to assessing terrorism,” he told the Times of Israel, “because of their devastating effect and the sense of threat they create.”

As for the future, the INSS report concludes that Islamic terror organizations have adopted istishhad (self-sacrifice in God’s path) as a principle of faith. In view of the Islamic State’s territorial losses and the increasing international efforts to drive it out of the areas it controls, it is likely that the Islamic State and its partners, together with other terrorist groups, will work harder to commit more terrorism atrocities and claim more victims.

Suicide terrorism will, therefore, be “a key tool for the Islamic State in consolidating its image as unconquerable, creating deterrence against its enemies, and taking revenge for the international activity against it.”