Breitbart Jerusalem obtained access to correspondence posted in a closed chat group that utilizes the encrypted Telegram messaging service. The chat group serves as an internal Twitter of sorts for IS jihadists and sympathizers, and it has been used in the past to issue IS communications.

In the chat forum, militants sounded off about the suicide bombings for which the Islamic State claimed responsibility via its Aamaq news agency.  Forty-four people were killed in the attacks, which struck St. Mark’s Cathedral, the main Coptic church in Alexandria, and a church in the Nile Delta city of Tanta.

One user who goes by the name of “The Egyptian Abu Abdullah Almassri” was jubilant. He wrote: “Allah, Allah, our beloved brothers in Egypt, the country we left reluctantly but to which we will return as liberators. You, the mujahedeen of Welayat Sinai, should carry out more suicide attacks. Our brothers who have infiltrated the security forces, strike hard. We, your Egyptian brethren, stand right behind you. Unravel this criminal regime. Allah, bless the Islamic State and its soldiers.”

“Allah bless those who undermined Egypt’s security,” user Abu Ruqaya Alhalabi wrote. “Our beloved brothers in the security forces be tough on the infidels. Let the blood of the Christians who have fought against Allah’s religion flow. Kill them whenever you find them.”

Abu Nasser Almassri Almuhajer (the “Immigrant Egyptian”) discussed the two suicide bombers: “Allah, welcome our beloved brothers [the suicide bombers] Abu Isshaq al Massri and Abu Baraa Almassri as martyrs. They sacrificed themselves to Islam and its people.  They avenged the death of our Muslim sisters in the hands of these Christians who live in our country, from where we emigrated in favor of our religion and the oppressed Muslims.”

He continued: “We tell the Christians, the Crusaders and the nonbelievers: We swear to Allah that you’ll see more things that will inflict pain on you. We promise to meet you at Al Aqsa Mosque, we will liberate Rome and humiliate the tyrants and the infidels. From Damascus, we call on our brothers in Waliyat Sinai, in Raqqa, in Mosul, strike hard, and bring more blessings with the bodies of the suicide bombers, so that they would feel the pain of the mujahedeen.” 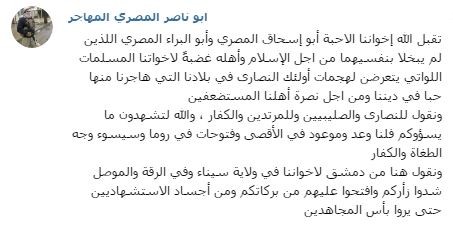 Referring to the deadly twin suicide bombings, a jihadi in Gaza tied to Islamic State ideology told Breitbart Jerusalem that “these actions cheer up our mujahedeen brothers everywhere.”

He said: “When we see what’s going on in Sweden and we see our friends striking the infidels and Crusaders in Egypt despite all the security precautions, we conclude that in the global war against Islam and the Islamic State, Allah refuses to abandon the mujahedeen and gives them strength to strike his enemies. Our brothers will strike everywhere in Europe, America, Russia, China, and the nonbelieving Arab regimes.”