WASHINGTON, DC — The parents of Israeli Defense Forces (IDF) Lieutenant Hadar Goldin — brutally murdered by Hamas during a humanitarian cease fire brokered by the United Nations and United States — are seeking help from the U.S. and United Nations in getting the terrorist organization to return their son’s remains to Israel so that he can receive a proper burial.

Hadar was 23 and Oron was 20 when they were murdered by Hamas; Hadar was killed on August 1, 2014, and Oron was confirmed to be killed by July 25 that same year.

“Hadar is a victim of a cease fire instead of a war and this cease fire was brokered by John Kerry and Ban Ki Moon. Since they brokered the ceasefire, we are looking to the United States and the U.N. to bring their bodies home,” Leah Goldin told Breitbart News. 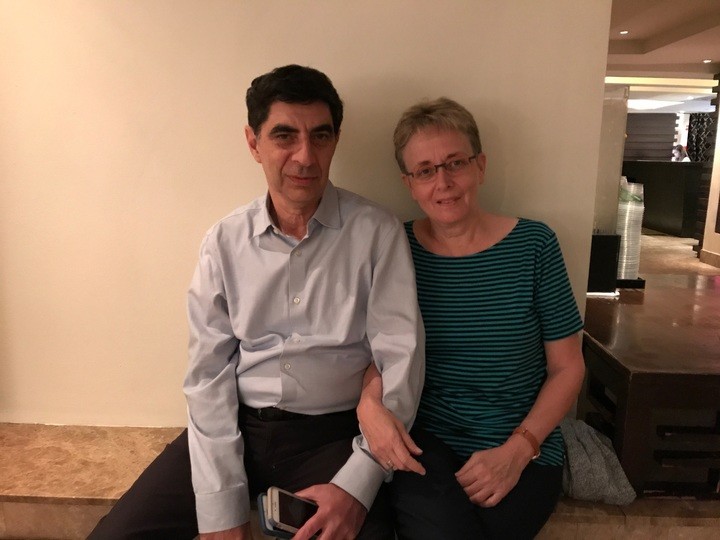 Hadar was in charge of engineering to destroy underground tunnels built by Hamas — tunnels that are used to infiltrate and attack Israel.

“What happened with the violation of the cease fire was actually an act of the Obama administration,” Leah said. “We are hoping the new administration can erase this stain and show that they can be better than the previous administration. The U.S. and UN must live with the consequences of having cease fires with terrorists.”

She added, “What we are trying to push is to make Hadar’s case an American issue since the United States brokered the ceasefire and we are asking them to please take some responsibility.”

The Goldins and Israeli Ambassador to the U.N. Danny Danon met at the United Nations on Friday to gain support for their cause as they presented the case for the return of Hadar and Oron’s remains in front representatives for America, Mexico, the EU, Norway, and Poland among other pro-West nations.

“We sent our twin boys to Gaza to fight and destroy the underground tunnels and launchers,” Leah said. “He was commanding a rescue force and he went back and forth to Gaza to rescue wounded and dead soldiers. And he also rescued Palestinian families that were caught in between fire. Because, you know Hamas was using civilians as human shields,” Leah said.

Breitbart News has repeatedly reported on Hamas’s use of Palestinians as human shields, which the terrorist organization has done for years. The practice runs counter to international humanitarian law.

As Breitbart previously reported, “In 2008, Israel’s Ministry of Foreign Affairs provided detailed evidence of Hamas’s use of human shields in Gaza. During 2012’s Operation Pillar of Defense, a Hamas official boasted of using human shields in the fight.”

Leah asked if American money will take a stand for American values and whether the Trump administration will be the one to reverse years of U.S. policy towards the Palestinian Authority (PA), which itself has supported terrorism.

President Donald Trump has the power to hold or freeze the aide package to the Palestinian Authority by signing an Executive Order.

“The bodies of Hadar and Oron have been held for more than three years by a terrorist organization. It is despicable,” Ambassador Danon said on Friday. “No country should remain indifferent to this situation.” He added, “The international community must intervene and exert pressure on Hamas in order to bring them back to Israel. We will not rest until Hadar and Oron are returned for proper burial.”

“Israel is the first to help with humanitarian aid internationally, yet when I want to bring my son’s body home, a soldier, which is our humanitarian right, where is the help we need?” Leah lamented.

She explained to Breitbart that “Two hours after the ceasefire was declared, Hamas ambushed he IDF knowing they couldn’t fire back and they took them by surprise and killed them,” Leah said.

She said Hadar’s death is one of the “consequences of having a ceasefire with terrorists who unfortunately do not apply any humanitarian rules.”

Hamas has been kidnapping Israeli soldiers to use them as bargaining chips. Gilad Shalit’s case is the premier example of this. The Israeli government traded 1,027 Palestinian terrorists in exchange for Shalit on October 18, 2011.

Yahya Sinwar, the founding member of Hamas’s military wing, was one of the prisoners released in the exchange for Shalit. In February, he was elected as Hamas’s new leader in the Gaza Strip in secret elections. He replaced Ismail Abdel Salam Ahmed Haniyeh (Ismail Haniyeh).

She noted that Hamas attempted to make it appear like they were alive and photoshopped their faces onto videos which they sent to the Israeli public. “They took Bedouins who are mentally ill, put Israeli uniforms on them, and photoshopped Hadar and Oron’s faces onto theirs.” Leah added, “they did it every couple of months. They published posters and movies showing superimposed photos of their faces and make it appear like they are alive. They even made a video of them singing me happy birthday.”

Leah said, “this is a new kind of terror. The traditional act of terror is you have the incident and then the casualties. This is now a new and ongoing type of terror against families. These terrorists would not survive one day without the aid from UNRWA (the United Nations Relief and Works Agency), human rights organizations, the U.S. and the UN. But they do not apply or comply with any humanitarian values.”

The case to bring her son’s remains home is “a humanitarian case study. A violation of a cease fire, kidnapping the dead. Kidnapping them alive may have some logic, but kidnapping the dead?” Leah said, “they have proper burials for their terrorists. They believe they should be buried before sunset.”

Radical Islamic terrorists Syed Rizwan Farook and his Pakistani-born wife Tashfeen Malik received a traditional Islamic burial after they murdered 14 people and injured 22 others during a Christmas party in San Bernardino, California, on December 2, 2015.

“They lack basic human dignity. It is not reasonable that the whole world will struggle to give them humanitarian aid when they don’t apply our humanitarian values and needs,” Leah said.

“Human bodies should not be used as bargaining chips. That’s a basic humanitarian value,” she said. “I want my son to get buried in Israel and according to Halachic law. This is the basic value. It’s not just humanitarian.”

“Chesed Shel Emet is something that when you treat the dead, you don’t get in return anything,” Leah explained. “It’s the only mitzvah that you only give and don’t get anything in return. It is the truth.”

She said rabbis from Orthodox to reform Judaism agree across the board that “this is a basic Jewish value.”

“We have some letters from imams and they say those people who prevent Hadar from a decent burial are sinners because according to the Qur’an you have to bury the dead before sunset. And if you prevent it, you prevent them from going to paradise.”

Leah noted that, while there is no formal relationship between Israel and Hamas, “because Hamas are terrorists,” if they were to start a negotiation, “the first thing Hamas would demand is a list of terrorists that they could use to bargain for exchange.” As such, Leah said, “We are reaching out to the international community to motivate Hamas and countries and entities that support Hamas — like Qatar, Turkey, Egypt, Jordan and Iran — to help us bring our son’s body home for a proper burial. These Hamas supporters should give a good answer about their bad record before they are rewarded by the western world,” she said.

Hadar’s twin brother, Tzur, has been very vocal about this issue.

“We think it’s about time to flip the equation. That’s what we are trying to convince everyone of. This was Tzur’s idea,” Leah told Breitbart News.

“Tzur said yes, to bring Hadar home it will be a cost,” Leah said. “But it’s time to flip the equation and define a price to Hamas for holding the bodies and for kidnapping in the first place.”

She suggested Israel should consider halting a rule that allows Gaza-based relatives of a terrorist sitting in an Israeli jail cell to visit “until they return our son’s body.”

She said this was the discussion in Israel, “but after two years we saw things were not moving and we have come here to get hep from officials.”

In February, the Goldins met Ambassador Nikki Haley at the U.N. and she offered to discuss their case in front of the Security Council.

Leah said, “this meeting we had on Friday is not replacing the one we want with the Security Council. Having a formal Security Council meeting will result in a declaration which is very important to be referred to when dealing with human rights organizations or states that support terror and specifically Hamas.”

That said, Leah expressed her gratitude to Haley, adding, “We are very happy with the new administration’s attitude towards terror and we see all the activities in Congress and at the UN against terror, especially with Senators Lindsey Graham, Ted Cruz, Tom Cotton and Marco Rubio.”

“It’s difficult to negotiate with terrorist organizations because they will kill you,” Leah said. “But it’s easier to deal with their supporters like Qatar and Turkey because they try to show that they are western countries and comply with humanitarian rights and so this is the time to say hey, you’re not; you are supporting terror this is a black spot. you should clean it.”

Hadar was an artist and an avid writer. Leah is a software engineer and lecturer by day. At night, she organizes Hadar’s art exhibitions. His artwork is currently displayed at the Museum of Tolerance in California. His exhibit is called, “Hadar, the Final Piece.”

Leah told Breitbart News that Hadar was engaged to be married at the time of his death. She said one of the paintings Hadar painted — that of a lone fisherman sitting in a boat on a vast blue sea, fishing by moonlight — was made for his fiancé, Edna. “He made that painting of the fisherman for his fiancé, Edna. The wedding was scheduled for september 18.” She added, “we refer to Edna as our young daughter.” 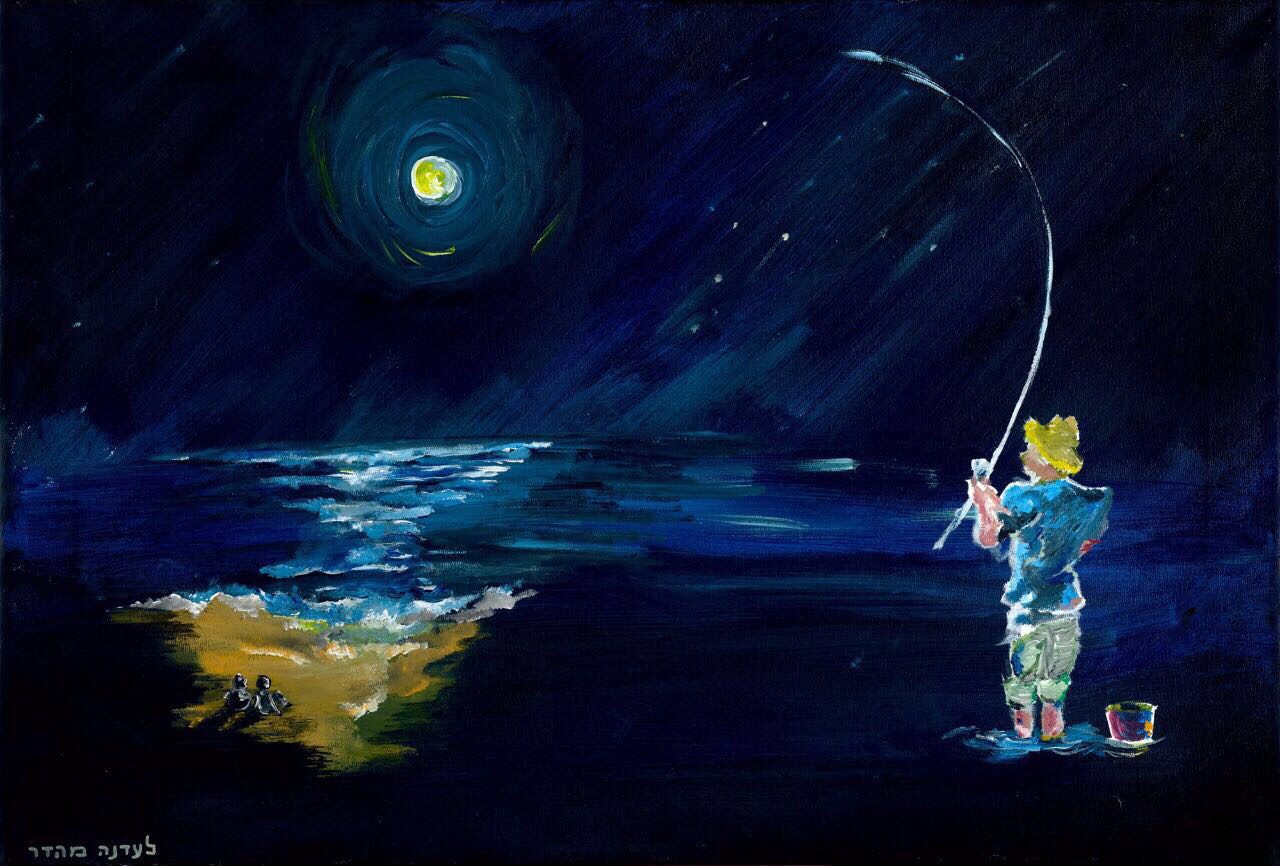 “Hadar also left us with a wonderful legacy.” Lead said Hadar used to write while he was an instructor in B’nai Akiva and that he used to write many motivational thoughts during his time in the Israeli Army. “Amazing phrases he used to motivate people. One of them was, ‘You have two options in life: to mess with yourself or to do great things.’ And we heard from these soldiers that when they were down he inspired to them to do great things.”

Another Hadar quote was, “If you do something good, think about how to do it better.” Lead said, “he used very simple words with great meaning and now people are studying it.”

The Goldins have four kids in total: Hadar; Oron; a daughter Ayelat, who has four kids of her own; and Menachem, who is a lawyer in Jerusalem and a ballet dancer.

Yogev, their grandson and Ayelet’s s son, followed the steps of Hadar and is now serving in the same elite unit as him (Sayered Givati), Leah said.

“Now, we are using all of our energy to bring him back,” Leah said. She noted that Hadar’s inspirational words have caused many people to reach out to the Goldins. “It’s the people around us that request the materials and now we have some wonderful ideas to establish a program about how to educate people for values.”