The governments of Colombia, Honduras, and Guatemala joined Argentina on Monday in designating the Iranian proxy group Hezbollah a terrorist organization, a reflection of its growing influence in neighboring Venezuela.

The announcement occurred at the third annual Western Hemisphere Counterterrorism Ministerial in Bogotá, where U.S. Secretary of State Mike Pompeo emphasized the danger of Venezuelan dictator Nicolás Maduro’s ties to Hezbollah for the entire region and noted the importance of the elimination of Iranian terror chief Qasem Soleimani for Latin America.

Soleimani was the head of the Islamic Revolutionary Guard Corps (IRGC) Quds Force, the head of Iran’s foreign terrorism strategy and reportedly responsible for all of Iran’s military decisions in Latin America. He also maintained ties to and ensured the effectiveness of Hezbollah in that capacity. A U.S. drone strike eliminated Soleimani this month.

We applaud the announcements of Colombia, Honduras, and Guatemala to designate #Iran-backed #Hizballah a terrorist organization. It and other transnational terrorist groups remain active in the region. The U.S. continues to rally international support to counter these threats.

No Latin American state had branded Hezbollah a terrorist organization – despite its documented ties to drug traffickers and violent socialist regimes in the Western Hemisphere – until last year. Argentina added Hezbollah to its “Public Registry of Persons and Entities Tied to Acts of Terrorism” in June, but had to create the registry to do so. Many South and Central American states also lack this mechanism, an analog to the United States list of Foreign Terrorist Organizations.

Hezbollah, in tandem with Iranian government and IRGC officials, is widely believed responsible for the 1994 bombing of the Argentine-Israeli Mutual Association (AMIA) headquarters in Buenos Aires, Argentina, killing 85 people. The attack was the deadliest in the history of the hemisphere before September 11, 2001. Interpol has issued six red notices – requests for the arrest of individuals named – for Iranian government officials and Hezbollah terrorists believed to have planned and executed the attack.

In a joint statement following the ministerial, the attending nations recognized “recent actions by states to counteract Hezbollah network activities” while also urging governments that had not yet deemed it a terrorist group to do so and “find more effective measures of limiting this threat.” It expressed a commitment from participating states to condemn all acts of terrorism, recognize and identify terrorist groups operating in the region, and bring about initiatives to “permit an appropriate regional response,” according to the Argentine outlet Infobae.

To facilitate the third vow, the summit announced the creation of the Interamerican Counterterrorism Network, an agency for “24-7” communication among states on capturing and neutralizing terrorists.

Colombian President Iván Duque noted in a press conference Monday that it was designating Hezbollah as part of a larger adoption of a list of American and European Union designations of terrorist groups, which expands Bogotá’s cooperative ability to work against not just Shiite terrorist groups like Hezbollah, but groups like the Islamic State and al-Qaeda.

Also listed as terrorist threats along with Hezbollah are Colombia’s National Liberation Army (ELN) and other Marxist guerrillas, many of which are operating out of Venezuela with Maduro’s support.

Speaking at the summit, Pompeo noted that the removal of Soleimani from the battlefield would have positive effects on counterterrorism initiatives in Latin America. 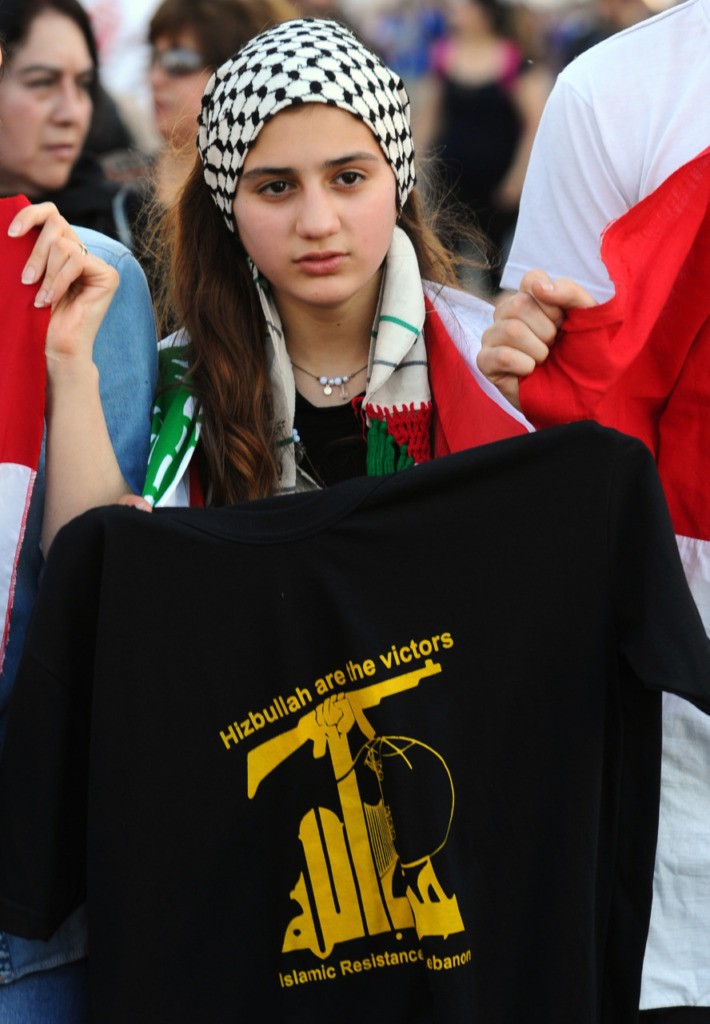 A teenager holds a T-shirt of Islamic movement Hezbollah while members of the Syrian community in Argentina and members of leftist parties protest outside the U.S. embassy in Buenos Aires (DANIEL GARCIA/AFP via Getty Images)

“Since last we met, the United States has done our part to take down the threat of Iran’s proxies. We eliminated Qasem Soleimani, and we strengthened our maximum pressure campaign of economic sanctions, diplomatic isolation, and strategic deterrence,” Pompeo said. “The United States is encouraged to see how other nations have also confronted Hezbollah and other terror groups.”

“We all know, too, that the Iranian regime’s top terrorist proxy, Hezbollah, has found a home in Venezuela under Maduro. This is unacceptable,” Pompeo noted.

Following the airstrike against Soleimani, Venezuelan socialist leaders attended a memorial service and signed a condolence book for Soleimani – believed responsible for taking thousands of Muslim lives – and proclaimed the terrorist leader “a martyr of the Bolivarian Revolution.”

Maduro’s former vice president and current minister in control of the nation’s lucrative oil and gold resources, Tareck El Aissami, is a U.S.-designated “drug kingpin” considered one of Hezbollah’s most effective fundraisers in the world.

“He facilitated shipments of narcotics from Venezuela, to include control over planes that left from a Venezuelan air base and drug routes through the ports in Venezuela,” U.S. Immigration and Customs Enforcement (ICE) stated in a “most wanted” alert for El Aissami published in August.

“In his previous positions, he oversaw or partially owned narcotics shipments of more than 1,000 kilograms from Venezuela on multiple occasions, including those with the final destinations of Mexico and the United States.”

Hezbollah is also known to profit from trade with Brazilian drug gangs, Mexican cartels, and Marxist organizations like the ELN and the Revolutionary Armed Forces of Colombia (FARC). It is particularly active in the “tri-border area” connecting Brazil, Paraguay, and Argentina.