On Monday, Ben & Jerry’s announced its plans to end sales in what it termed the “Occupied Palestinian Territory.”

According to Klein, the Boycott Divestment and Sanctions movement, which put heavy pressure on the ice cream giant to stop sales in Israel and particularly in the West Bank, is antisemitic and would rather see the Jewish state eliminated entirely.

“I don’t like it when people misuse words like antisemitism. This is not being misused. The BDS movement of which Ben and Jerry’s is now a part is the very definition of antisemitism. It delegitimizes the right of Israel to exist,” Klein told Batchelor.

“Ben and Jerry’s shows what BDS really is. It is not about Jews living in certain areas which within itself is already antisemitic to oppose that. It is Jews living in Israel. It is the existence of Israel,” Klein, who previously served as Breitbart Jerusalem’s bureau chief, said.

He went on to explain calling it “Occupied Palestinian Territory” in itself is a misnomer since such a territory “doesn’t legally exist anywhere.”

There is no Palestine.  In fact, the title Palestine was previously used for the pre-Israel Jewish communities.  If anything, the United nations at most calls these territories “disputed.”

What are they even talking about here? “Occupied Palestinian Territories.” They are referring to, for example, eastern sections of Jerusalem. This means the Kotel, the Western Wall, the Temple Mount — the holiest site in Judaism — according to Ben and Jerry’s is occupied.

They’re talking about the Jewish quarter of Jerusalem which Jews inhabited for 3000 years.

It is not just these areas that Ben and Jerry’s falsely labels occupied.  The board of directors, according to reports, they want to boycott Israel in its entirety. Ben and Jerry’s announced that they are not going to continue the licensing agreement with their Israeli licensee here who manufacturers Ben and Jerry’s in all of Israel. When Unilever, the parent company that bought Ben and Jerry’s, tried to stop that, the Ben and Jerry’s board fought them.

Klein called on Ben & Jerry’s and its parent company Unilever to immediately “cancel this antisemitic decree, ” concluding by telling Batchelor he would personally no longer be buying Ben & Jerry’s. 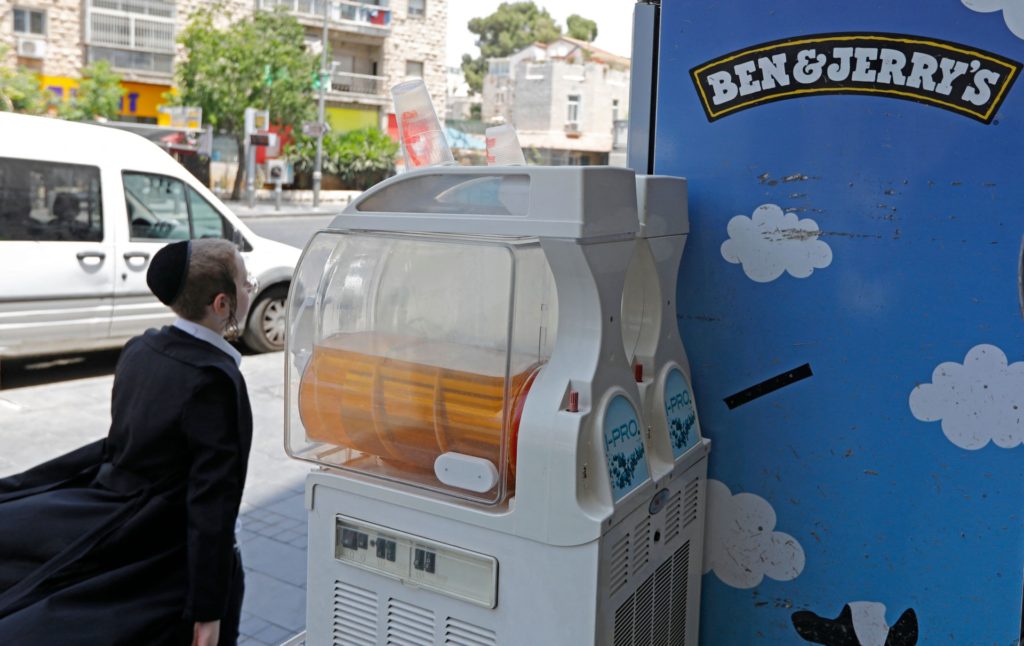 An Ultra Orthodox Jewish youth walks by Ben & Jerry’s ice cream in Jerusalem on July 20, 2021. American ice cream-maker Ben & Jerry’s announced on July 19, 2021 they would stop selling their ice cream in the Palestinian territories, saying its sale “is inconsistent with our values.” The Unilever subsidiary said they “hear and recognise the concerns shared with us by our fans and trusted partners,” without elaborating. (AHMAD GHARABLI/AFP via Getty)

Herzog declared Israel would not stop fighting Ben & Jerry’s boycott as well as other means of economic warfare against it.

His remarks echoed those of Israeli Prime Minister Naftali Bennett a day earlier.  Bennett told Alan Jope, the CEO of Unilever that the boycott is an “anti-Israel” move that would be fought “vigorously.”

Others were quick to join the fray and stand up against the company and its anti-Israel boycott.