Democratic Senators are rejecting President Donald Trump’s four-part amnesty-and-immigration reform, and are instead working with business-first GOP Senators to pass an amnesty with only token reforms.

“There is not likely to be a DACA deal, though we’re working every single day, on telephone calls and person to person, to try to reach this bipartisan agreement,” Sen. Dick Durbin told Jake Tapper on the February 4 edition of CNN’s State of the Union. Durbin said the Democrats would not stage another shutdown, but declared:

I think we’re making real progress. I want to salute the moderates in both the Republicans and Democratic caucuses in the Senate. They have really been a positive voice, Democrats and Republicans sitting in the same room working to try to solve this problem.

The Democrats’ sharp-elbowed rejection of Trump’s four-part plan — including an amnesty for at least 1.8 million illegals — explains Trump’s Friday complaints that Democrats are not bargaining over his four-part framework offer. The offer trades the amnesty in exchange for a border wall with legal upgrades, plus ending the diversity lottery and winding down the chain migration program over the next 10 years.

I would say we want to make a deal.  I think they want to use it for political purposes, for elections.  I really don’t — I really am not happy with the way it’s going from the standpoint of the Democrats negotiating.

Trump does not seem to be dropping any of his three asks in the closed-door talks. On January 2, for example, Trump attending a public briefing on border security issues, where officials described the legal loopholes used by migrants to get through the border. Trump responded:

These are things you can’t even negotiate.  I mean, you can’t negotiate this with the Democrats, because this is stuff for safety.  And it’s not like, “Oh, gee, let’s, you know, work a halfway deal.”  You have such bad — you have such bad [border] procedures.  You’re forced to do everything that you people were taught not to do, when you think about it.

If Trump wants to keep his proposal on track, he should promise to veto the Democrats’ push to pass an amnesty with token “border security” upgrades, said Rosemary Jenks, director of government relations at NumbersUSA.

“President Trump needs to say he will veto [an amensty] deal that is weaker than his framework,” he said.

Without his veto threat, many GOP Senators will decide that Trump is caving, and then ally with Democrats to vote for a business-backed amnesty bill — which House Speaker Paul Ryan may then shove through the House, she said, adding:

Without the President’s leadership, we’ll get the typical amnesty bill that we always get, and it will be totally unacceptable to Americans, and he is the only person who has the ability to stop that …

If the Republicans screw up immigration, the impact in November will be tremendous. This is the issue that could sink the Republicans’ majorities. I hope they realize how much is riding on it.

The bottom line is President Trump ran and won on this, and who can make sure there is a good deal or if no deal, then the Republicans can say [to voters] very easily at this point: “We offered the most generous plan ever seen and the Democrats refused it … we are willing to give pass an amnesty if we could get an overall immigration policy serves the national interests and the Democrats don’t want that.”

The Democrats’ refusal to deal suggests they hope to split the GOP by pushing business-first Republicans to betray populist voters by backing a pre-election amnesty deal opposed by Trump. That win would provide the Democrats with a big win and morale booster before November while splitting the GOP elite from their voters.

Likely Democratic allies include Sen. Susan Collins whose home-state of Maine has been losing investment and people as legal immigrants spur growth in other states. Other potential allies include retiring Sen. Jeff Flake, liberal Sen. Lindsey Graham as well as business-first GOP members, such as Sens. John Thune and Lisa Murkowski.

Pushing for a bigger win also helps the Democrats avoid paying the painful price of Trump’s offer, which requires them to approve a border wall, legal reforms to block migrants, ending the visa lottery program and agreeing to end the chain migration system in 10 years. All of those Trump demands are viscerally opposed by some or many of the Democrats’ diverse and fractious interest groups.

Also, the Democrats’ maximalist strategy still allows the Democrats to later take Trump’s offer — or else decide to use the amnesty impasse to help goose their turnout in November.

The only risk for Democrats is that Trump may refuse to compromise and then make the November elections all about amnesty, the visa lottery, and chain migration — even while Trump’s low-immigration policies are forcing companies to offer higher wages to Americans. 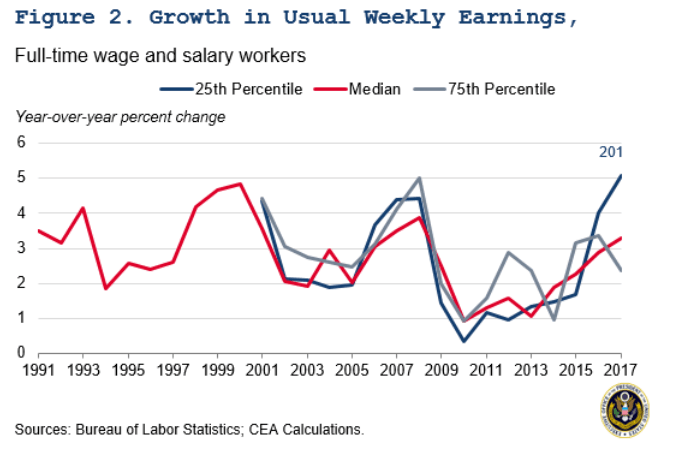 Trump’s statements have suggested he is willing to focus the 2018 midterm on his pro-American immigration policies and the resulting rise in wages. On February 2, for example, Trump said:

Really, [the November election] is another way of doing it. And based on the [election related] numbers we just saw, we have a real chance of doing that …  [Immigration] is now an election issue that will go to our benefit, not their benefit.

Great jobs numbers and finally, after many years, rising wages- and nobody even talks about them. Only Russia, Russia, Russia, despite the fact that, after a year of looking, there is No Collusion!

The Democrats’ diverse political coalition may not be capable of accepting Trump’s amnesty offer but would rather pick a fight prior to the November elections. For example, Durbin suggested to Tapper that Trump’s immigration policies are racist, not pro-American.

Understand what they are proposing. They want to cut legal immigration into the United States of family members, some of whom who have waited 20 years or months to join up with their families here.

This is no longer about the security of the United States. It is not about competition for American jobs. It is an effort by them to make a different immigration policy in the future, one that envisions an America that is much different than it is today. This is not an acceptable premise.

The Trump Administration’s immigration proposal envisions an America that is less diverse than it is today. This is not an acceptable premise. pic.twitter.com/nOo1HPzTcE

Durbin’s statement is the third time that Democrats have personally stiffed Trump in the negotiations.

First, Durbin leaked Trump’s “shithole” comments in a closed-door negotiation to portray him as racist, and then Schumer promised January 18 to fund a wall for $25 billion but quickly told a New York Times interviewer that he did not think the wall would ever get built.

I don’t see a government shutdown coming, but I do see a promise by Senator McConnell to finally bring this critical issue that affects the lives of hundreds of thousands of people in America, finally bringing it to a full debate in the Senate.

That’s what we were looking for when there was a shutdown. We have achieved that goal. We’re moving forward.

more than 80 percent of Americans support curbing legal immigration levels, a plan that Trump has endorsed to raise the wages of working and middle-class Americans and stem the current never-ending flow of cheaper, foreign competition that burdens the country’s blue-collar workers the most.

Business groups and Democrats tout the misleading, industry-funded “Nation of Immigrants” polls which pressure Americans to say they welcome migrants, including the roughly 670,000 ‘DACA’ illegals and the roughly 3.25 million ‘dreamer’ illegals.

The alternative “priority or fairness” polls—plus the 2016 election—show that voters in the polling booth put a much higher priority on helping their families, neighbors, and fellow nationals get decent jobs in a high-tech, high-immigration, low-wage economy.