The 2,232-page omnibus budget created by Democrats and business-first Republicans include a section on page 665 barring the administration from studying or setting a “border crossing fee” to fund additional border-control programs.

The section is likely intended to prevent President Donald Trump from raising extra revenue that could be used to stop illegal migration via the construction of border walls or the creation of additional detention beds. 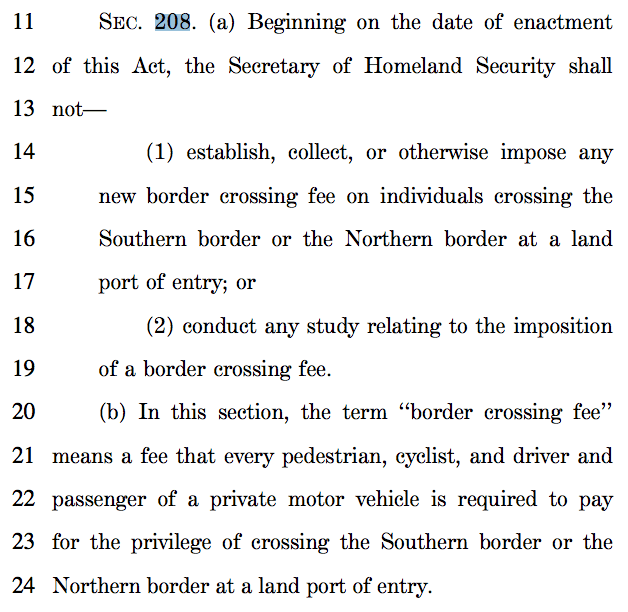 The omnibus bill also includes several features designed to open the borders to a steady flow of cheap-labor migrants, even though the 2016 election was decided by the public’s support for pro-American immigration reform.

The bill only allows the construction of roughly 33 miles of new frontline fencing in the Rio Grande area, alongside the Gulf of Mexico. It also allows construction of 14 miles of reserve fencing behind existing walls in California.

The bill prohibits the prototype walls which Trump showcased this month:

The amounts designated in subsection (a)(2) through (a)(4) shall only be available for operationally effective designs deployed as of the date of the Consolidated Appropriations Act, 2017, (Public Law 115–31), such as currently deployed steel bollard designs, that prioritize agent safety.

Each year, 4 million Americans turn 18 and begin looking for good jobs in the free market.

But the federal government inflates the supply of new labor by annually accepting roughly 1.1 million new legal immigrants, by providing temporary work-permits to roughly 3 million foreigner visitors, by not blocking the arrival of roughly 250,000 border crossing illegals, and by mostly ignoring the employment of roughly 8 million illegal immigrants.