This is the fourth in a series in five parts based on the new book American Betrayal: The Secret Assault on Our Nation’s Character (St. Martin’s Press) by Diana West.

The two most ardent boosters of the Normandy invasion were Stalin and Harry Hopkins.

At this point in this series, the combination should prompt at least a second look at the strategy. The heroism, sacrifice, and achievement of all the Allied forces in Normandy stand undimmed, but the question becomes to whose end was the invasion launched – ours or Stalin’s?

Before laying out some clues to the answer, it’s worth noting that the conventional understanding of the Normandy invasion – the “long-awaited invasion” of the European continent to open the “long-awaited second front” – perpetuates some of Stalin’s most pernicious disinformation. British and American forces had already invaded Europe (Sicily, Italy) long before the Normandy invasion. Churchill famously urged that the advance on Germany continue from already-won bases in Italy and elsewhere in south-central Europe. 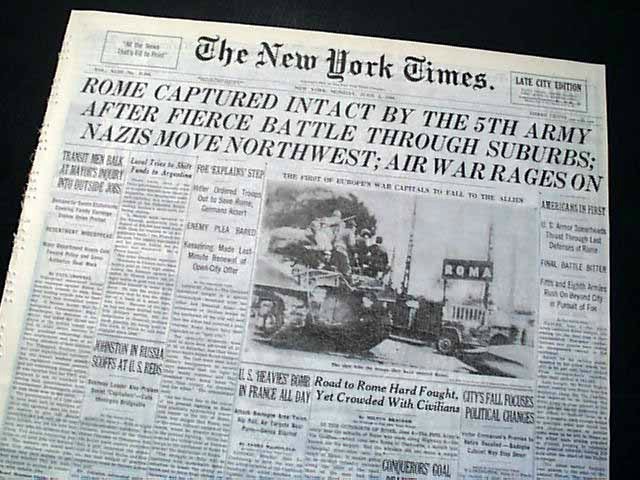 Stalin’s demand for the big U.S.-British push in northern France, however, prevailed. According to the tally of one peeved letter to the editor in the New York Times, this would put the Allies on track to open their ninth front.

In his memoir, Calculated Risk, Gen. Mark Clark, commander of U.S. forces in Italy, explains how gutting his forces in Italy in the months before D-Day stalled Allied progress against German forces. (Italy had already surrendered.) Meanwhile, the disappearance of Allied men and materiel from the battlefield completely mystified the Germans.

For weeks, Clark writes, Allied counterintelligence “was catching enemy agents who had orders to find out ‘where in hell’ were various Allied divisions that were being sent to France.” They couldn’t believe the Allies weren’t dealing them the death blow they had expected.

Italy, after all, as a senior U.S. commander explained to assembled military brass at the Cairo conference in late 1943, “was the correct place in which to deploy our main forces and the objective should be the Valley of the Po. In no other area could we so well threaten the whole German structure including France, the Balkans and the Reich itself.”

“Here also our air would be closer to vital objectives in Germany,” he explained. The commander went on recommend “operations in the Aegean”: “From here the Balkans could be kept aflame, Ploesti would be threatened and the Dardanelles might be opened.”

That commander’s name was Dwight D. Eisenhower. Soon, he would be named Supreme Commander of the Normandy invasion. His enthusiasm for the Churchillian Italian/Balkan campaign is preserved in the State Department records of the Cairo Conference.

Interestingly, it doesn’t appear in Crusade in Europe, Eisenhower’s 1948 war memoir, where he portrays himself as an undeviating supporter of the Normandy invasion. The State Department corrective wouldn’t be published until 1961 – the year Ike left the White House. In this way, myths take hold.

To be sure, there were legitimate strategic arguments against the southern European strategy, and the subject is debated to this day. But the political ramifications of a British and American presence in central Europe – holding back the Red Army – are irrefutable.

On August 11, 1943, John C. Wiley, a Soviet expert in the OSS, wrote to FDR recommending the opening of a front in the Balkan area “where it could best influence the course of the war, diplomatic relations with the Kremlin and the peace to come… An invasion of France and the Lowlands would give us no political authority in central and eastern Europe. Only a successful Anglo-American invasion of southeastern Europe can give us a real voice in the eventual peace settlement.”

No one in Communist-“occupied” Washington was listening.

Diana West is the author of American Betrayal: The Secret Assault on Our Nation’s Character.