The United Nations Relief & Works Agency For Palestine Refugees (UNRWA) announced Tuesday that another rocket stockpile has been found at one of its schools in Gaza. This instance marks the third time since the beginning of Operation Protective Edge that a weapons arsenal has been found at an UNRWA school in Gaza.

UNRWA has yet to place blame on any individuals or organizations for placing the weapons stockpile within a children’s school. The UN body refused to do so on the past two previous occasions as well.

The UN body, after both previous findings, has handed the rockets it had found back into the possession of “the local police,” otherwise known as the terrorist group Hamas.

This week, UNRWA supplies and building materials had been found in Hamas’s tunnel infrastructure, which has been used to smuggle weapons and carry out attacks on the State of Israel. 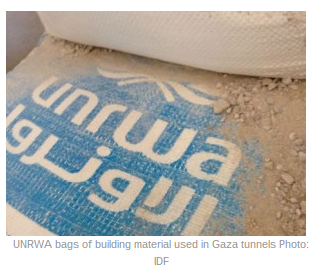 The UN agency has a well-documented history of using their US taxpayer-funded facilities to promote anti-Israel and anti-Semitic propaganda. It has in the past been accused of aiding and abetting radical Islamists in Gaza and elsewhere.

UNRWA was created in 1949 to provide relief and public works programs for displaced Arab refugees that had formerly inhabited the British mandate of Palestine. UNRWA is currently the largest agency-subdivision of the entire UN, employing over 30,000 staff. UNRWA has objectively failed in its primary goal of finding homes for those it has deemed “refugees”. From 1949 to present day, refugees recognized by UNRWA has grown from 750,000 to 5,000,000 people.