There is no Iron Dome in Gaza, where hundreds of Hamas rockets are falling short in the Strip, killing scores of innocent civilians.

During the day Wednesday, 140 rockets were fired from Gaza, indiscriminately destined for Israel. According to Israel Defense Forces, 81 hit Israel, 9 were intercepted by the Iron Dome missile defense system, and 50 fell short within the Gaza Strip. Thirty-six percent of the rockets intended for Israel fell short in Gaza.

According to Algemeiner editor Dovid Efune, as many as twenty-five percent of Hamas rockets in Gaza fall short and kill innocents.

July 28: Hamas terrorists fired a rocket salvo at Israel from a highly populated area. Instead of hitting Israel, two of the rockets struck a hospital and refugee camp inside Gaza, resulting in the deaths of over a dozen Palestinians. 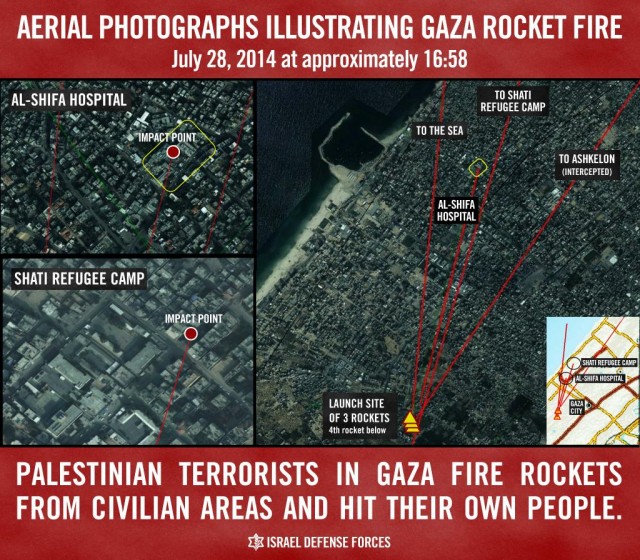 July 13: A Hamas rocket fired into Israel struck a power plant, knocking out power for over 70,000 Gazans.

February 2008: Flying shrapnel killed an infant after a Qassam missile was launched near her home in Gaza.

December 2008: A Hamas rocket intended for Israel blew up a house in Gaza and killed two young schoolgirls–a 5-year-old and her 12-year-old cousin.

All indications as of Thursday evening local time are that ceasefire negotiations between Israel and Hamas have completely come to a standstill. According to a report by Israel’s Channel 2 News, Israel is considering its own plans of dealing with the draw-down of conflict. The report said that they first must finish wiping out the Hamas tunnels, then moving troops out of the Gaza Strip. Israel would then work towards a 72-hour ceasefire that would be complemented by the Egyptian government monitoring Hamas, then finally asking Palestinian Authority President Mahmoud Abbas to help rebuild Gaza after Operation Protective Edge is declared over.