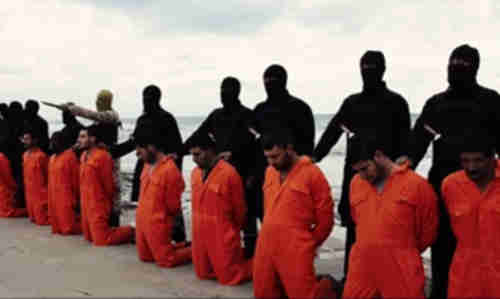 Egypt’s president Abdel al-Fattah al-Sisi has called a national security emergency and declared seven days of national mourning after a terrorist group released a video showing the beheading in Libya of Egyptian Coptic Christians. The video was released on a web site belonging to the Islamic State (IS or ISIS or ISIL or Daesh). The people shown were among 27 Egyptian Coptic Christian workers who were kidnapped in the Libyan city of Sirte in December and January.

The beheading video comes two days after an ISIS online magazine display pictures of 21 hostages, accompanied by the text:

This month, the soldiers of the Khilafah in Wilayat Tarabulus [Caliphate State Tripolitania] captured 21 Coptic crusaders, almost five years after the blessed operation against the Baghdad church executed in revenge for Kamilia Shehata, Wafa Constantine, and other sisters who were tortured and murdered by the Coptic Church of Egypt.

Last year, there were an estimated one million Egyptian guest workers in Libya, but the numbers have shrunk considerably since civil war broke out last summer between the Libya Dawn government in Tripoli and the internationally recognized Libyan government which has fled to Tobruk. The 21 hostages have been identified as fishermen from an impoverished village in northern Egypt. Al Ahram (Cairo) and BBC and Guardian (London)

Egypt purchases fighter jets over fears of militias in Libya

Egypt’s president Abdel al-Fattah al-Sisi on Sunday vowed to choose the “necessary means and timing to avenge the criminal killings” for the murder of 21 Egyptian Coptic Christians by an ISIS-linked militia in Libya, but military action in Libya has been considered for some time. The murder is increasing public pressure on al-Sisi to take some action to counter the increasing security threats from jihadist militias in Libya. Egypt has in the past denied that it had taken part in airstrikes in Libya, and said that no airstrikes are planned. It now appears that airstrikes are on the table, though ground troops are apparently not being considered at this time. The border between Egypt and Libya has become almost lawless, and cross-border attacks into Egypt have become common.

On Thursday, Egypt announced that it will sign on Monday a $5.7 billion deal to purchase 24 Dassault Aviation Rafale fighter jets, a naval frigate and related military equipment from France. The purchase will be partially funded by France and by an Arab country, either United Arab Emirates (UAE) or Saudi Arabia. Egypt is no longer receiving military aid from the United States, as the Obama administration cut it off after the 2013 coup that deposed president Mohamed Morsi and his Muslim Brotherhood government.

Libya itself is almost in total chaos, with two different governments. The government in the west is Libya Dawn, with Islamists and militia from the Misrata region, in control of the capital city Tripoli. The second government is the internationally recognized government, which was forced to flee to Tobruk in the east. The al-Qaeda linked terrorist group, Ansar al-Sharia, has been operating in Libya with headquarters in Benghazi, where it was responsible for the attack that killed American ambassador J. Christopher Stevens in 2012. However, based on Sunday’s news reports, it appears that Ansar al-Sharia is no longer allied with al-Qaeda, and has now pledged itself to ISIS and renamed itself Khilafah in Wilayat Tarabulus [Caliphate State Tripolitania].

Egypt is facing increasing threats from ISIS-linked militants. There have been other abductions of Egyptian workers by Libyan militias. In the Sinai, along the border with Gaza and Israel, there have been a series of terrorist attacks. There have been recent reports that Israel and Egypt and planning joint military operations to target terrorists in Sinai. Al Ahram (Cairo) and Reuters and France 24 and Debka

The governments of three Yemen provinces, Aden, Lahij, and Mahra, met in Aden on Sunday to discuss the situation following the government takeover last month by the Iran-backed Shia Houthis of Yemen’s government in Sanaa. The leaders of the three provinces announced that they support the country becoming a federation as discussed at meetings last year. They called for the reinstatement of the president and for the militia to step down.

Yemen seems to be going down the same road as Libya, with the possibility of two governments — a rebel government in the capital city Sanaa, and an internationally recognized government in Aden. There’s the additional complication that Yemen is the headquarters of Al-Qaeda in the Arabian Peninsula (AQAP), which may either fight with or try to control a second government in Aden.

Also on Sunday, the UN Security Council prepared to adopt a resolution calling on the Houthis to step aside or “face consequences.” The Security Council resolution is being supported by the Arab League and by the Gulf Cooperation Council (GCC). According to a GCC statement, “In the case of failure to reach an agreement … the GCC member states will take measures which enable them to maintain their vital interests in the security and stability of Yemen.”

However, a Houthi spokesman responded to the GCC’s comments, calling them “provocative blackmail”: “The Yemeni people won’t cede power in the face of threats.” Arab News and The National (UAE)